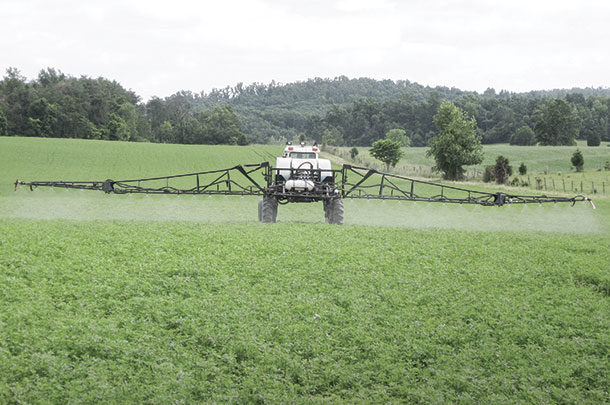 Dialing in the alfalfa nitrogen credit for fertilizer savings

With a few exceptions, first-year corn silage and small-grain forage crops had limited yield increases that did not pay for the cost of the fertilizer.

Martha Kerestes
Martha Hoffman Kerestes is a freelance writer based in Illinois.

Earl Creech, Utah State University extension agronomist, detailed the results of corn silage trials, beginning with a 2012-13 study in Cache County, Utah, that tipped them off to the possibility producers might not need to consistently apply nitrogen after alfalfa.

The study checked zero, 50, 100 and 200 pounds nitrogen per acre as ammonium nitrate in surface application at planting. They found an increase of 1.3 tons (from 27.9 to 29.2 total production) from no added nitrogen to 200 pounds, which was not statistically significant and did not pay for the fertilizer.

“That really caught our interest because most growers who were following alfalfa with corn in this state and in southern Idaho are applying 150 to 175 pounds of nitrogen per acre to corn grown in that situation,” Creech said.

Historically, terminating alfalfa has mean assuming a 50- to 100-pound nitrogen credit to contribute to the 200- to 250-pound nitrogen rate typical for Utah corn production. Before changing recommendations to producers, Creech said they wanted to study a larger set of fields.

The next set of trials took place from 2014 to 2017 across 10 counties and 36 fields in the major regions of corn production in Utah. The findings were the same – a small increase in corn silage tonnage but not to a statistically significant level.

“When you add in the price of nitrogen, there’s no economic benefit to applying nitrogen to first-year corn grown after alfalfa in all these site years,” Creech said.

When looking at second-year corn silage after alfalfa, he says most sites were still not responsive to added nitrogen, although it might be wise to apply a small amount. When fields did respond to nitrogen, it was in the 50- and 100-pound increments, and the 200-pound rate did not increase yield much at all beyond the 100-pound rate.

One exception to the rule of low response to nitrogen application was located at the bottom of a flood-irrigated field where water would pond. Creech thought the significant yield increases from added nitrogen were due to extensive nitrate leaching that meant the corn needed the additional fertilizer to help fill the void.

Soil samples taken at planting supported the idea that added nitrogen was not necessary for optimum yields. He said tests showed plant-available nitrogen over the growing season was over 300 pounds, including what the alfalfa had provided, which explains why the corn silage did so well without added fertilizer.

He said the studies took place in 2018 and 2019 across 13 fields around the state with a variety of small-grain species and mixes intended for forage. Terminated alfalfa ranged in age from 3 to 10 years, and Yost explained that the age of the stand can impact how much nitrogen is available.

For the first year after alfalfa, only one site saw a significant forage yield increase from added nitrogen – it took about 70 pounds of nitrogen for economically optimal yield. Yost said it was likely caused by the 10-year-old alfalfa stand that had gotten quite thin and did not have the nitrogen-providing power a good stand has.

Looking at forage quality, added fertilizer almost always improved the protein levels of the small-grain forage and improved digestible nutrients in about half of the fields. If a producer gets monetary benefit from increased quality, either from premium sale prices or feeding to owned livestock, Yost recommended applying nitrogen to small-grain forages after alfalfa since the price of fertilizer could be recouped. If forages are sold by yield alone, he suggested not applying nitrogen from an economics standpoint.

First-year small grains grown for grain harvest were tested in 17 fields in 2018 and 2019. Most of the fields needed nitrogen for optimal yield, ranging from 70 to 150 pounds. Still, about five sites had no yield response to the added fertilizer.

Yost said early spring soil nitrate tests proved helpful in deciding whether or not a field needed additional nitrogen for grain yield. About 75% of samples accurately determined the nitrogen needs of the crop.

Testing costs about $15 per field, so he recommended using this tool to check the individual field’s needs and reduce fertilizer spending where it will not likely pay. If samples are below about 20 ppm nitrate, there was a grain yield response to added nitrogen and it took 85 to 100 pounds of nitrogen to achieve optimal yield.

Yost said they have only done a small number of second-year small-grain crops, so additional study is needed, particularly to determine if soil nitrate tests can predict nitrogen needs. He said there have been five trials for grain and four trials for forage production. All of the grain-production fields required nitrogen for optimum yield, and one of the four small-grain forage fields required nitrogen for optimum tonnage.

“We’re still working to see if we can predict those responses using the soil nitrate test, but right now we just don’t have a great way to indicate when and how much nitrogen you might need for the second-year small-grain crop after alfalfa,” Yost said.

He said they hope to have more data soon to help answer some of these questions.

Looking at high nitrogen prices this season and the body of research they have done, Yost recommended testing the nitrogen-providing power of terminated alfalfa on at least a small acreage of small-grain or corn silage crops.

“If you’ve never relied on an alfalfa nitrogen credit in the past, this is the perfect time to start,” Yost said.

Martha Hoffman Kerestes is a freelance writer based in Illinois.