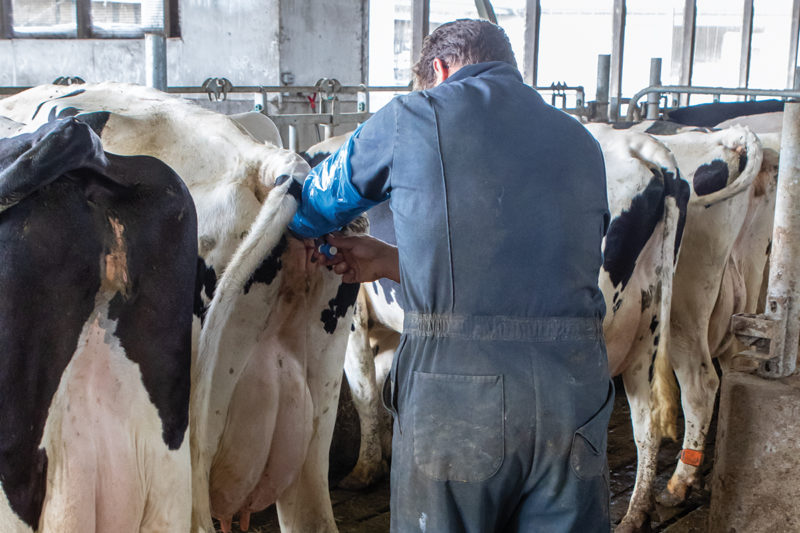 Hitting the trifecta of high milk yield, a clean bill of health and strong reproductive performance is attainable if producers monitor and devote resources to preventing common disease events.

Much like the focus elite athletes give to their workouts, training programs and diets, managers of high-producing dairy cows must dedicate a similar level of care and attention to fine-tuning the health and routine of their herd. At least, this is how Dr. Stephen LeBlanc, professor at the University of Guelph, sees it.

“High-producing dairy cows – who metabolically, at peak, are doing the equivalent of running about two marathons a day in terms of caloric output – their demands in terms of nutrition and management and how we look after and support that potential has to be at a very high level,” LeBlanc explained during his recent presentation for Semex titled, “The triple crown or Bermuda triangle?”

LeBlanc’s presentation pulled from various datasets globally, along with some of the research he has overseen, to answer the question of whether high milk yield, a good health record and strong reproductive performance can coexist in dairy cows. He challenged the often-held idea that producers must accept sacrificing performance in one of these three areas to achieve success in the others.

The parameters to gauge performance

To dive into the relationship between milk yield, health and reproduction, the parameters to determine animal and herd efficiency in these areas must be gauged. If we take a black-and-white approach to measuring milk yield, quantifying production to the simplified low, medium or high yield, and animals are viewed as either healthy or unhealthy, producers and their teams can then get a snapshot of how animal performance in these areas may be impacting reproductive performance.

To reveal this snapshot, LeBlanc suggested pregnancy rate as the preferred metric. “For herd monitoring, the single-best measure of reproductive performance of a herd of cows, now and over time, is pregnancy rate, or 21-day pregnancy rate. This is literally the speed at which open cows are converted into pregnant cows,” he stated.

Consistently, disease events, particularly those occurring throughout the transition period such as metritis, retained placenta and cystic ovaries, are found to be associated with a longer time to pregnancy. However, LeBlanc noted, milk yield is not a determining factor. In fact, he explained, an increase in milk yield has been found to be associated with higher herd pregnancy rates.

The repercussions of this can be hard to stomach, as nearly half of cows experience one or more health events during some stage of their productive life. However, this association appears to be unrelated to milk yield, as data on large, very high-producing herds shows cows that stay healthy do very well in terms of pregnancy rates at first insemination.

The role of disease events on fertility

Now that it has been determined that high milk yield does not have a clear connection to lower reproductive performance, we can turn our attention to the importance of maintaining a healthy herd.

It is well established that any and every health problem is likely to be bad for fertility. However, LeBlanc argued, producers should look deeper into this issue to understand which events have the greatest impact on reproductive performance.

Looking at some common clinical diseases, LeBlanc posed the following question: “Each of these things would be bad for the cow that’s affected, but at what point does it become a problem for the herd?”

“Each of those things was probably pulling down the herd’s pregnancy rate at first A.I., not just the individual animal, and therefore is a candidate to be worth management attention and investment to help reduce these levels in the herd,” LeBlanc continued.

In summation, the data shows cows that previously live through clinical diseases in the transition period are associated with worse reproductive performance. Thus, they are likely to see a lower first A.I. conception rate, are less likely to remain pregnant and subsequently calve, all of which amplifies the negative impact of experiencing transition diseases.

“Health is a really important intervening variable,” LeBlanc stated. To reinforce the role of herd health on herd reproduction, he recommended keeping cows healthy to see a much bigger impact on reproduction compared with monitoring or adjusting for cow milk production. LeBlanc argued that producers can gather a more precise indication of a cow’s health status by examining cow body condition as a determinant of reproduction.

LeBlanc noted that looking at BCS post-calving can help identify which cows are poised to be on a “high fertility cycle.” This relationship is observable again through conception rate at first A.I., where cows that maintain body condition are found to perform better than cows that lose body condition. This impact goes further, LeBlanc pointed out, as cows that gain body condition have been observed to have “almost unbelievably good” pregnancy to first A.I. rates.

“If we put the pieces in place to provide for and sustain excellent production – which is to say good nutrition, good cow comfort, excellent health management – that will put the foundation in place to support all three of health, high yield, and good reproductive performance,” LeBlanc concluded. He urged producers not to shy away from strong milk yield and focus resources on areas of herd health which, when mitigated, are known to encourage reproductive performance, helping farms attain the elusive “triple crown.”

GEA is one of the world’s leading manufacturers and suppliers of integrated milking and manure management solutions for dairy and livestock farming.

Entirely dedicated to animal health, Vetoquinol supports Canadian veterinarians and producers through a wide range of pharmaceutical products and a complete biosecurity line.