“You need to take into account the cow’s natural ability to tell you what she needs, no computer necessary,” said Richard Holliday, DVM. “Put the minerals out, and let the cows choose it, if they need it.”

Holliday advocates free-choice minerals to cows as a way to improve overall cow health. He first learned about this concept in the 1960s and has observed cow behavior with minerals ever since.

Many producers wonder why their cows chew on wood or eat dirt. Holliday said that is the result of zoopharmacognosy, which refers to an animal’s innate ability to seek out plants and herbs that possess healing compounds. If animals cannot find what they need in plants, they will seek other sources.

Holliday recommended both beef and dairy cows be offered, at a minimum, the following minerals free-choice:

Holliday noted that cows will often eat a lot of the minerals when they are initially offered, but farmers should not be deterred.

Although it may seem expensive at first to feed minerals this way, the cows’ intake will usually level off after a few weeks, presumably when they make up for deficiencies they previously had in their diets. 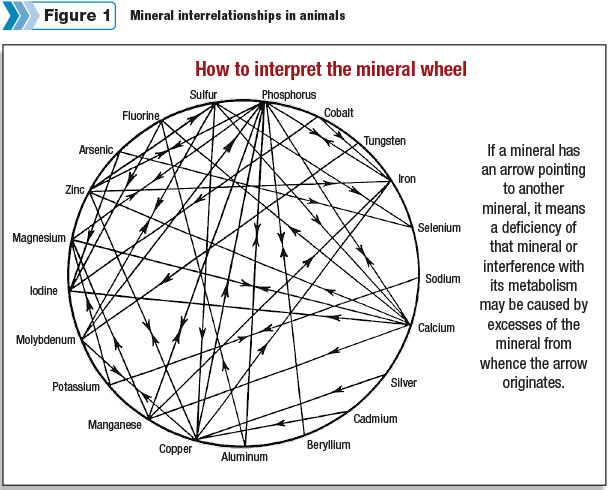 He also said if they lack trace minerals, they may eat a lot of kelp. “If kelp consumption remains high, you may want to provide separate sources of some of the trace minerals,” he said.

Give your cows a chance to participate in their own diet formulation, Holliday urged. “We should use our nutritional knowledge to formulate dairy rations but also rely on the nutritional wisdom of animals to fine-tune their individual needs. It doesn’t hurt to have two opinions – one from your nutritionist’s computer and one from your cows.”

Each of the minerals should be offered individually, not mixed together. Many different systems can work well for this, from a do-it-yourself dividing of a feedbunk for the different minerals to rubber tubs with partitions.

Holliday noted that if the animals don’t have daily access, that is OK as long as they can feed on the minerals two or three times a week.

Holliday said most domestic animals today are affected by four main problems that create mineral imbalance. They are lower nutritional value of crops due to soil depletion, less nutritional diversity due to varying degrees of confinement, animals being fed excess protein and force-fed minerals, and contamination of soils, crops and feed with unnecessary chemicals.

The negative effects of soil depletion and confinement can be offset by providing a free-choice source of individual minerals, he said.

The benefits of cafeteria-style minerals, according to Holliday, are lower feed costs as animals utilize feedstuffs more efficiently, animals staying in the herd longer, improved reproductive efficiency, animals able to immediately provide for their mineral needs when changes in diet occur, improved health and animals able to adjust minerals for seasonal changes and reproductive cycle changes.

This type of system is more labor-intensive, and demand can change based on rations, weather and seasons, but Holliday said it is worth the effort.

He also noted that he has never seen an animal “overdose” on a mineral when given free choice; in fact, he said there can be fewer mineral-related health issues in cows when they can choose what they eat instead of us choosing for them.

Holliday explained that most minerals have “inter-relationships” in animals, meaning a deficiency of any given mineral may be caused by excesses of a different mineral. A mineral cannot be affected without affecting at least two other minerals, each of which will affect two others – and so on.

“Mineral balance is essential,” he said. “Either excesses or deficiencies can have serious metabolic side-effects. For example, high iron ties up copper, cobalt, manganese and zinc, all of which are essential to immune response.”

Because there is great mineral variation in soils state to state, county to county and even field to field, the nutritional value of the crops grown on different fields varies as well. Feeding minerals free-choice may help maximize what your animals utilize from their feed, he said.

A TMR can negate an animal’s ability to select for individual needs. If there are excess minerals in the TMR, they can also cause problems, Holliday said. For example, if there is excess calcium in the ration, animals will eat excess phosphorus to balance the calcium-to-phosphorus ratio.

Consumption of phosphorus will go down if some calcium is removed from the force-fed ration.

When self-regulating minerals are offered, Holliday said observation of the following is common:

Holliday also encouraged the feeding of an effective prebiotic/probiotic/enzyme program to allow for maximum absorption and utilization of grains and forages. “Feed the rumen bacteria, and the rumen bacteria will feed the cow,” he said.

He said self-regulating mineral can work with most ruminant animals, as well as horses.  PD

Richard Holliday was among the presenters at the 2016 GrassWorks Conference, held annually in Wisconsin.