Telematics at the kitchen table

As a machinery salesperson and consultant in the dairy industry, I spend a lot of time on feedpads, from looking at how rations are mixed to suggesting what type of loader a farm should use. In order to make qualified recommendations in the past, I have looked at mixer sizes, fuel usage, rations, loader owning and operating costs, and much more. In the end, my advice was based more on experience than on a quantifiable reason.

Now we have much more data to base recommendations on, thanks to telematics. Telematics is the technology that has quietly slipped into the equipment world. It not only records a machine’s sensor data but allows it to be communicated, usually by cellular network, to a server where owners and dealers can access it for reporting.

With telematics, your machine can let you know if it requires service or if a sensor is warning you of an ongoing issue. We can also look at compiled data and begin to understand how a machine is being operated.

This takes me to an early morning this spring. As I do quarterly, I sat at my kitchen table with my laptop and reviewed machine reports one after another for wheel loaders around Michigan. I look at fuel burn, service history, machine settings, trends in usage, etc.

It makes my job easier to group loaders by size, and I found little to talk about until getting to the class of loaders around 185 horsepower. This group of loaders is on different-sized farms, but all the wheel loaders are used primarily on the feedpad.

With only three loaders in this group, I could easily compare the telematics data among the loaders. There was an anomaly, something drastically different with one of the loaders, that changed my plan for the rest of the day and resulted in all of [our] wheel-loader owners in Michigan learning something about their farms.

Click here or on image above to open it at full size in a new window. (PDF, 505KB)

What I noticed was a wide variation in fuel burn. Farm A was burning 3 gallons per hour, Farm B was at 3.4 gallons, and Farm C was at a whopping 5.4 gallons.

Knowing I would need to somehow be able to compare the machines and farms using common variables, I decided to gather some information on herd size and milk production. In order to learn the most from the data, I wanted permission from the farmers to share their data with the other farms. I also wanted to give them a little insight and hear what their speculation might be.

Farm A, with the lowest fuel burn, praised his feeder as a very cost-conscious person. The fuel burn rate on Farm B didn’t surprise the farm owner. He pointed out that they raise their own heifers, so it would be expected that it takes them longer to load and feed. This is an important fact since not all the farms managed their herds the same way. I added that variable to the study.

Farm C’s owner, the one with the highest fuel burn, was concerned by his operator’s heavy foot and pointed out the compact nature of his feedpad compared to other farms. This brought up another variable to look at, that of distance traveled by each machine, which meant I needed to visit each farm to check the odometer on each loader. Unfortunately, distance traveled isn’t a metric reported by telematics on wheel loaders.

My first stop was at Farm A. The farm is a mix of conventional and robotic milking. They raise their own heifers and daily mix 21 loads in an 1,100-cubic-foot mixer. The loader travels 21.4 miles a day, which averages out to 7.26 miles per 1,000-cow equivalents.

The loader has a 5-yard bucket compared with the other loaders in this comparison, which have 6-yard buckets. It was sized smaller for the farm’s mixer and rations so that no ingredient takes more than two buckets to load.

Next, I swung into Farm B. The farm mixes 25 loads daily with a 1,200-cubic-foot mixer. This loader travels 22 miles a day and averages 5.86 miles per 1,000-cow equivalent. This farm had the highest amount of idle time, contributing to the higher run time per cow as compared to the other two machines.

Much of the idle time can be attributed to the machine not reaching a high operating temperature that would have initiated a shut-off in Michigan’s cold weather. (This study is based on a 90-day average of data collected during the coldest part of Michigan’s winter.)

Finally, I made the drive to Farm C. This was the farm with the highest fuel burn. This farm does not raise their own replacements but feeds out about 560 steers and uses a large, nearly 2,000-cubic-foot mixer. The loader travels 28 miles a day and averages 6.65 miles per 1,000-cow equivalents.

Based on telematics, I already knew the feed personnel here were running the loader with manual transmission settings while the other two dairies were completely automatic.

Interviewing the feeder, who had not been on the farm long and had no previous loader experience, showed a gap in training. Since I had made no changes on the other dairies and had collected enough data for a baseline, I switched this loader to automatic and could monitor it from my kitchen table over the next couple weeks.

I adjusted the farm’s loader owning and operating costs to account for their varying fuel usage but decided to keep variables such as labor costs of operator, fuel price ($4) and repair costs the same so we could see the impact of how the machine is being operated. Owning and operating cost calculations are very comprehensive and include fuel, replacement costs, tires, periodic maintenance, interest, insurance, damage and service calls.

We started the day with the theory that Farm C and the high fuel burn was a major problem. Very surprisingly, the owning and operating costs at Farm C were the lowest. It appears that they are indeed getting the most done in the least amount of time, making the loader cost the lowest of the three farms (see Table 1 ). 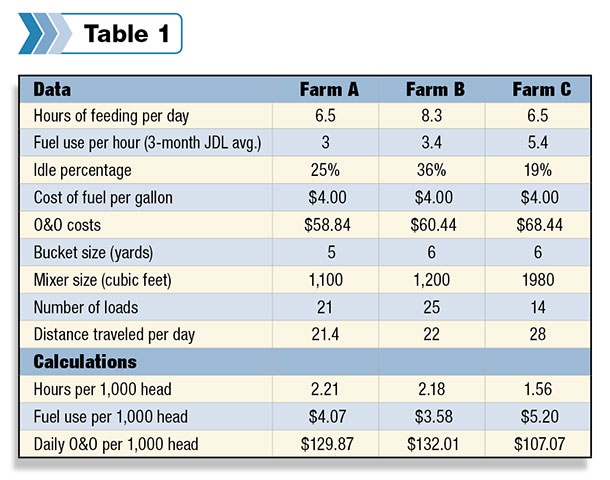 Although financially this farm seemed to be doing the right thing, there were some holes in training. The owner had actually inquired about three months prior to this if there was a way to limit the top speed of the loader because of what he felt were hard-shifting problems.

If I had been doing my job, I would have realized at that time they were operating with a manual transmission setting. After running the loader in automatic, feeding times did not increase but fuel consumption dropped to 4.5 gallons an hour, resulting in $8,541 in savings each year.

Farm B has the highest owning and operating costs per 1,000 head. However, if they reduced their idle time to 20 percent, the annual saving of loader costs alone would be $15,150.

Idle time on this loader size is calculated at around $31 an hour since there is no labor included and consumables are reduced. Because of the population makeup of animals, it is necessary to mix more loads than Farm C, but some time should be spent verifying if the mixer size is correct.

Farm A suspected that they could use a larger mixer but were unable to quantify the decision. Larger mixers can greatly reduce time and costs by reducing multiple trips of partial buckets to the mixer every day. If a larger mixer reduces feed times by an hour a day, and assuming a conservative $120 an hour for loader and truck mixer, that is $43,800 savings per year.

Telematics are able to give us information about our machines that we could never access easily before. The ability to get alerts of issues with the machine and reminders of needed service can be very valuable, but there is more information available when you spend time with the data. Telematics makes finding waste, and thereby savings, easier to find. PD