Butterfat is driving your milk price

The butterfat portion of milk was the minority value. In markets with multiple component pricing, the signal to dairy farmers was to produce more protein. Dairy farmers in these markets did respond, which is evident by average milk protein content increasing from about 3.02 percent in 2000 to 3.12 percent in 2016.

The pricing signal has now changed. Protein is no longer the most valuable milk component; butterfat is now milk’s most valuable component. Skim and the components in the skim, protein and other solids, are now the minority value. 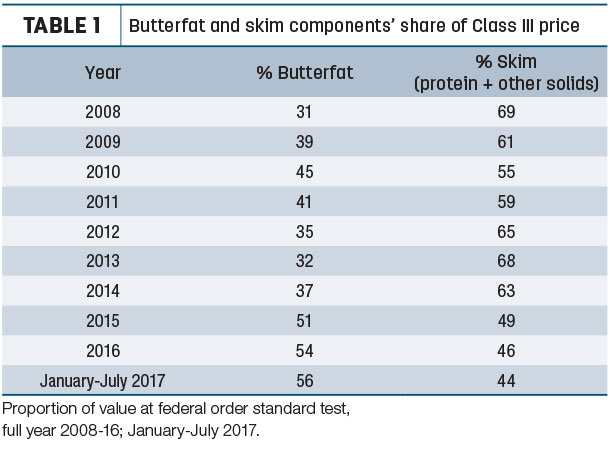 From 2000 to 2014, the average annual producer protein price was higher than butterfat every year. In 2013, protein was almost double the price of butterfat, $3.30 per pound to $1.66 per pound. In 2015, the shift started – the butterfat price became higher than protein (Figure 1). 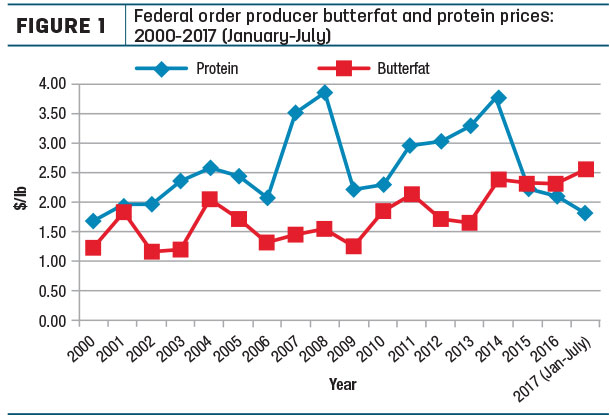 So far this year, the shift from protein to butterfat has accelerated. For the first seven months of 2017, the producer butterfat price has exceeded protein every month. In July, butterfat was almost two-and-a-half times greater than protein, $2.95 per pound to $1.22 per pound. The milk pricing system is signaling dairy farmers: Produce butterfat.

Without looking at the numbers, the increased value of butterfat relative to skim is occurring in the marketing of milk. During the first half of this year, finding markets for all milk production was a challenge. In areas with this marketing challenge, excess milk was separated into cream and skim.

Markets were available for the separated cream, and it was sold. Unfortunately, the skim (protein and other solids) was dumped due to no markets. This is reminiscent of market conditions in many parts of the U.S. prior to World War II. Milk was separated on the farm. The cream was sold because it was in demand. But the skim remained on the farm and was fed to hogs. History has a way of repeating itself.

Higher butterfat prices are the result of increased demand for milkfat. As seen in Figure 2, domestic disappearance for milkfat increased over 1 billion pounds in the 10-year period from 2007 to 2016.

A closer look at Figure 2 shows over one-half of the billion-pound increase occurred recently from 2014 to 2016. Already during the first five months of 2017, compared to the same period in 2016, domestic disappearance of milkfat is up over 1.5 percent.

One obvious place the additional butterfat usage is going is into butter. Domestic butter consumption increased at an annual rate of about 3 percent over the past 10 years. Households, restaurants and food manufacturers are turning away from margarine and vegetable substitutes, and using butter.

Through May of this year, whole milk sales are 2.1 percent higher than a year ago. Increased consumption of whole milk means less butterfat available for the butter churn, thus supporting a higher butter price which, in turn, increases the producer butterfat price.

Not to be overlooked, we must remember cheese utilizes a significant portion of the nation’s butterfat. Most cheeses are required to contain a minimum of 45 to 50 percent milkfat on a dry matter basis. Similar to butter, cheese consumption continues to grow about 3 percent a year, thus utilizing more butterfat.

Plus, due to low protein prices relative to butterfat, more cheesemakers are standardizing cheese milk by adding protein versus removing butterfat. This decreases the supply of butterfat available for other uses and again supports higher butterfat prices.

No doubt consumers are paying attention to the scientific studies, books and popular press articles that began appearing in 2014 which explained that saturated fat, the kind found in dairy products, does not increase the risk of heart disease. Plus, these sources also point out butter and cheese should be part of a healthy diet.

Since record farm milk prices in 2014, prices have declined significantly. The Class III price so far in 2017 is $6.32 per hundredweight lower than 2014. Breaking the Class III price down into its component values shows the entire decline is due to lower protein and other-solids prices.

No one can predict with 100 percent accuracy future milk prices. However, all current indications point to the demand for milkfat remaining strong, which means butterfat prices remaining high, relative to previous years. For the foreseeable future, butterfat will continue to drive farmgate milk prices.