Can you believe up to 60 percent of embryos don’t “make it” in the lactating dairy cow? That’s right. In addition to poor estrus expression and low conception rate, embryonic loss is another significant contributor to poor reproductive efficiency, with combined pre- and post-fertilization losses exceeding 70 percent (Figure 1). 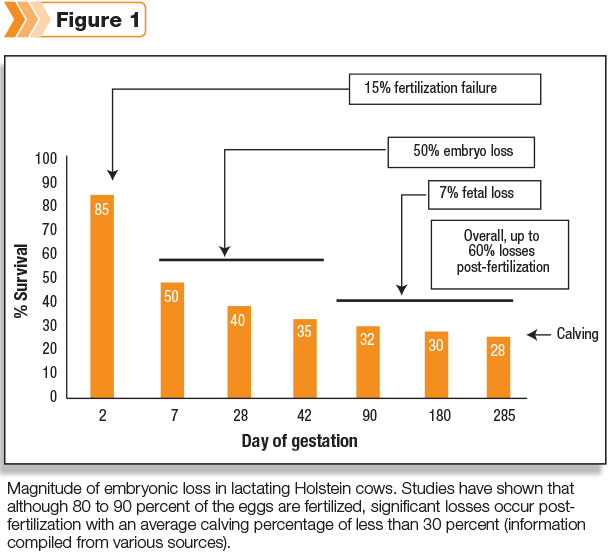 Consequently, reproductive wastage in lactating dairy cows, particularly in Holsteins, continues to be a major challenge for the dairy industry. Nutritional management is one among many strategies available to improve conception rates and reduce pregnancy losses in dairy cows.

A recent scientific paper comparing results from several previous studies, using a statistical approach known as meta-analysis, concluded that feeding fats to dairy cows during the transition period has a positive effect on fertility, with a 27 percent increase in the probability of pregnancy to A.I.

Enhanced fertility in cows fed supplemental fats may result from improved energy status in the early postpartum period, leading to shorter intervals from calving to first estrus and ovulation, increased production of reproductive hormones such as progesterone that are essential for pregnancy maintenance, higher serum insulin concentrations improving ovarian follicular development and reduced synthesis and release of prostaglandin F2α (PGF) from the uterus, thus creating an environment conducive for early embryo survival and pregnancy establishment.

Polyunsaturated fatty acids (PUFA) such as linoleic acid, α-linolenic acid, eicosapentaenoic acid and docosahexaenoic acids have received much attention in recent years for their positive effects on reproductive function in cattle.

Our research group in Edmonton has been studying the effects of diets enriched in PUFA, particularly α-linolenic acid (an Omega-3 PUFA), on conception rates and pregnancy losses in dairy cows.

In a study published in 2006, we compared the effects of type of PUFA on ovarian follicle size, early embryonic survival, conception rates and pregnancy losses in dairy cows receiving a diet supplemented with rolled flaxseed, one of the richest sources of α-linolenic acid, versus rolled sunflower seed, which is high in linoleic acid, an Omega-6 PUFA.

A total of 121 lactating dairy cows were assigned to one of two isocaloric diets starting about 55 days after calving. Diets contained 9 percent oilseeds on a dry matter basis, providing 750 grams of fat per cow per day, and cows received the diets for eight weeks. To remove variations associated with estrus detection, all cows were subjected to fixed-time A.I. following a Presynch/ Ovsynch protocol.

Early embryo survival to 24 days was assessed based on progesterone measured in blood, pregnancy diagnosis was performed at 32 days and, in a subset of cows, we also studied ovarian follicular size by ultrasonography.

The ovulatory follicle before first A.I. was larger in diameter (16.9 versus 14.1 millimeters), early embryo survival at 24 days after A.I. was higher (72.9 versus 47.5 percent), confirmed pregnancies at 32 days were higher (48.4 versus 32.2 percent), and cumulative pregnancy loss from 32 days until calving was significantly lower (9.8 versus 27.3 percent loss) in cows fed flaxseed than in those fed sunflower seed.

To confirm if the above findings of increased conception rates and reduced pregnancy losses in flaxseed-fed cows were repeatable, we conducted two follow-up studies: one in British Columbia, the other in Oregon. In both studies, lactating Holstein cows were assigned to receive a TMR containing 6 percent fat on a dry matter basis, and each cow received 2.2 kilograms of rolled flaxseed (flax) per day or no flaxseed supplement (control).

In Oregon, a total of 303 cows were assigned to receive a TMR, with 156 cows receiving rolled flaxseed and 147 cows not supplemented. The flax ration was formulated to supply 750 grams of fat per cow per day from flaxseed.

The control ration supplied an equal amount of fat from other ingredients containing little or no Omega-3 PUFA. Diets began 32 days after calving and continued until pregnancy diagnosis 31 days after timed A.I. Cows diagnosed pregnant were rechecked at 94 days to assess pregnancy loss between 31 and 94 days of gestation.

In the third study conducted in British Columbia, 266 lactating cows were assigned to receive a TMR supplemented with rolled flaxseed (141 cows) or a control ration with no flaxseed (125 cows); as in previous studies, the flaxseed ration was formulated to provide 750 grams of fat per cow per day from flaxseed.

The control ration was formulated to provide 750 grams of fat supplied from tallow and a rumen bypass fat very low in Omega-3 fatty acids. Diets began 28 days before timed A.I. and continued until pregnancy diagnosis at 35 days after A.I.

Again, pregnancy loss between 35 days of gestation and calving were about 50 percent lower in cows fed flaxseed than in cows fed a control ration (8.3 versus 16.3 percent).

Studies conducted independent of ours in Quebec and Florida also reported similar findings. While the Quebec research group used flaxseed as their source of Omega-3 PUFA, researchers in Florida used fish oil. As in two of our studies, differences in conception rates were not significant between dietary groups. However, pregnancy losses were significantly lower in cows fed diets supplemented with Omega-3 PUFA. 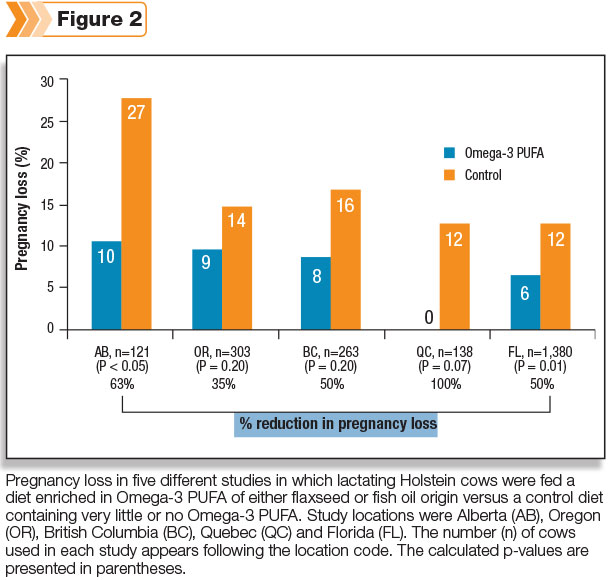 These findings strongly suggest that PUFA diets of flaxseed or fish oil origin (i.e., Omega-3 fatty acids) can reduce pregnancy losses in dairy cows. In other studies, we have found that diets enriched in PUFA have positive effects on the development of the early embryo in dairy cows, and that these effects may be occurring through differential activation of genes involved in growth and proliferation of embryonic cells.  PD