Dairy product exports were higher ahead of COVID-19 disruptions

Dave Natzke
Despite early indications of shipping disruptions resulting from the COVID-19 outbreak, U.S. dairy product export volumes tracked above year-earlier levels in February, according to the U.S. Dairy Export Council (USDEC). It marked the sixth straight month of positive growth, but with the break in global demand in March, volumes are likely to be lower in the months ahead.
Dave Natzke

Whey volumes continued to improve and were the highest in eight months (on a 30-day basis), as sales to China picked up.

Total cheese exports were the most in nine months, although 8% below February 2019. Shipments to Mexico were a 20-month high, while sales to Southeast Asia were the most ever. In contrast, sales to South Korea, Japan and Australia failed to match the strong levels of a year ago.

A weakening Mexican economy, reflected in a significantly depreciated peso, led to a slowdown in Mexican purchases of dairy ingredients. On a volume basis, overall dairy exports to Mexico were down 18%, to the lowest level since September 2017. 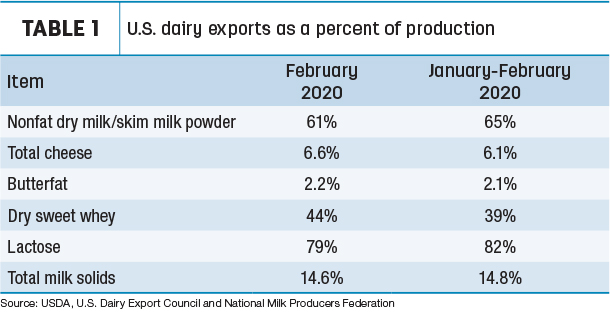 The USDA estimated 4,672 dairy replacement heifers were exported in February. Although down substantially from January’s total of 12,039, it was still the second-highest monthly total in the past year. February exports were valued at just over $4.7 million.

February exports of other hay continued to struggle, barely above January’s 24-month low. Shipments for the month totaled 106,677 MT, the second-lowest volume in the past 12 months. Japan was the leading buyer at 63,557 MT, with South Korea taking 22,355 MT.

Perhaps noteworthy in the February report was an increase in alfalfa meal and cubes exports. Most product categories posted the strongest volume totals since last October, with exports of sun-dried alfalfa meal topping 9,177 MT, nearly 10 times the total for January 2020 and the highest total on record.

The Northwest Farm Credit Services (FCS) quarterly hay market snapshot suggested that while export demand remained favorable, limited supplies of shipping containers will continue to be a challenge through the COVID-19 disruption.

The Phase I deal between the U.S. and China started the clock on development of timothy and alfalfa cube export protocols. There was still uncertainty around how strong demand will be, but the ability to ship to China is favorable for Northwest timothy growers, according to the FCS report. Chinese buyers tend to focus on "clean and green" alfalfa grades, and if this turns out to be the trend with timothy, it could provide some optimism to an oversupplied market.

Among competing suppliers in the export market, Australia was on track to export 1.1 MT tons of oaten hay to Japan, South Korea, Taiwan and China, but its own domestic demand could outstrip available supplies. Canada remains competitive in the timothy export market.

What steps are governments in other countries taking to address the impact of COVID-19 on their domestic dairy industries, and what impact do those steps have on the U.S. dairy industry? A Global Agricultural Information Network (GAIN) report from the USDA’s Foreign Agricultural Service indicates Japan has boosted support for dairy farmers and processors to mitigate the impact of reduced milk consumption in schools. The $21.5 million support program provides payments for excess milk diverted to further processing and nonfat dry milk (NFDM) diverted to animal feed.

Most Japanese school students receive about 6.8 U.S. fluid ounces of milk per day as a part of the school lunch program, and about 10% of fluid milk in Japan is diverted to school meal use.

With that milk backed up in the supply chain, farmers will receive payments equal to the difference between the price normally paid for milk for school use and the price paid for milk for further processing, likely butter and NFDM. Regional prices vary, but estimates put the average payment at about 33 cents (U.S.) per kilogram of milk, with total payments to farmers ranging between $8 million and $10 million.

Dairy processors will receive payments equal to the difference between NFDM sold for human consumption and that sold for animal feed, estimated at about $4.67 (U.S.) per kilogram. The total volume of NFDM eligible for payments was capped at 2,560 metric tons, estimated to be the amount of NFDM produced as a result of excess school use milk. Processors will also receive payments to cover extra costs for inventory management and transportation. The total value of payments made to dairy processers could range from $10 million to $12 million.

The impact on the U.S. dairy industry will likely be in the form of reduced NFDM exports. Japan’s stocks of NFDM are already near historical highs. In 2019, Japan imported 5,804 MT of NFDM from the U.S., valued at $13 million (U.S.).