Gavin Staley
How does one know when to breed virgin heifers? On many dairies, the decision is entirely subjective based on if the heifers look “big” enough, reach a certain age, or the pen is getting crowded and they need to move on.
Gavin Staley

However, the critical question should be, when are they mature? The following discussion will show that breeding immature heifers has a profoundly negative impact on the entire herd’s future productivity. Heifer maturity, in this discussion, is the phenotypic characteristics – such as bodyweight – that allow full expression of milk production during subsequent lactations.

In recent years, the potential financial benefits of calving heifers earlier were recognized and promoted, resulting in an industry-wide trend to breed heifers earlier. Unfortunately, the necessary management changes to achieve the required maturity goals with earlier calving have been widely ignored. This has been due, in large part, to limited use of objective growth data to evaluate heifer raising.

The evaluation of DC305 dairy records I collected over the past two years from a large number of herds, primarily but not exclusively in the western U.S., resulted in the identification of significant patterns associated with heifer maturity. The following observations were made. 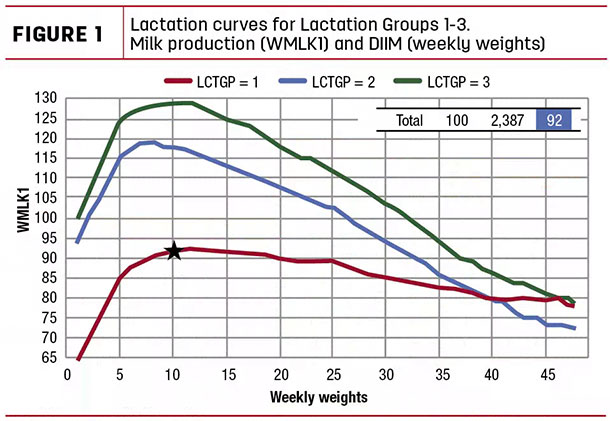 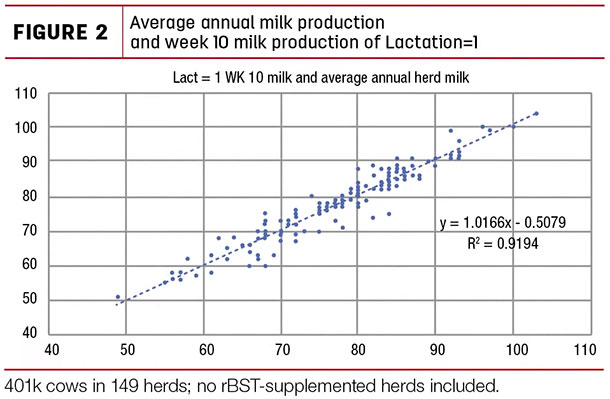 In Figure 1, the average annual milk production, as recorded in Econ\ID Reports, was 92 pounds. The 10-week milk of Lact1 is approximately 92 pounds. The above observation is important because it strongly suggests that the heifer milk production sets the “ceiling” for the entire herd. A herd cannot overcome the restrictions placed on it by under-performing heifers. It goes without saying that high-producing herds have high-producing heifers.

To validate this observation, DC305 data from 149 herds representing 401,000 cows was collated and the relationship determined (see Figure 2).

The above Figure shows the strong correlation (R2=92%) between these two variables. Furthermore, the slope of the equation indicates that as 10-week milk increases by 1 unit (pounds), so does the average annual milk (pound). An improvement of one pound of milk at 10 weeks of Lact1 will translate to an additional pound of milk for every cow, every day, as these Lact1 animals move on up into later lactations.

The production difference between Lact1 and Lactation=2 (Lact2) at five weeks of lactation is 30 pounds (13.6 kilograms) (Holstein) (Figure 3). 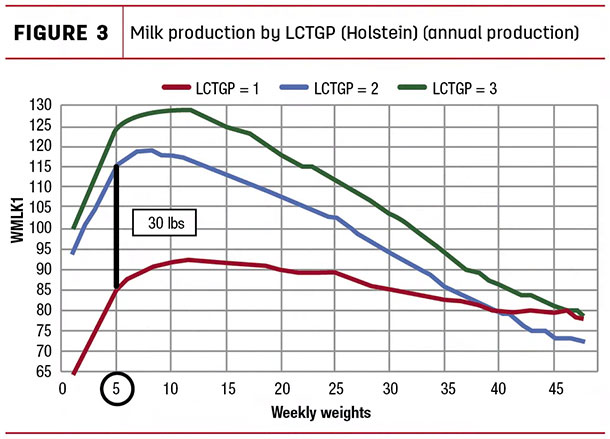 Five-week milk production was chosen as a comparative time period to accommodate for the difference in peaks between lactation groups. This observation is consistent in “stable” herds. Stable herds in this discussion are herds where there is very little fluctuation in average annual milk production year-to-year and little intentional change to the heifer program over time. In other words, all animals in the herd have had a similar heifer-raising experience. This observation is independent of milk production level.

This observation (Figure 3) is important because it clearly demonstrates the predictable change in herd milk production resulting from a change in heifer management. For example, if the difference between Lact1 and Lact2 at five weeks decreases by, say 3 pounds (i.e., is now 27 pounds), we can predict that the following year the difference between Lact1 and Lact2 will increase back to 30 pounds and Lact2 production will have increased the incremental difference. Similarly, a drop in Lact1 production will predictably drop milk production. Metaphorically, “all ships rise on a rising tide,” suggesting improved heifer performance lifts production of all parities with time.

In Figure 4, it is apparent that as heifers mature (i.e., grow) they produce more milk in Lact1. 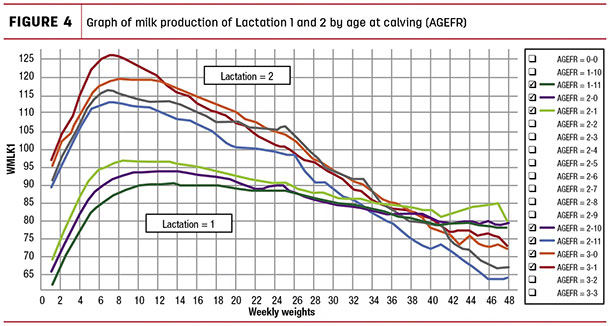 This is not surprising. It is noteworthy that all these Lact1 animals are subject to the same management, reproductive programs, culling philosophies, transition, nutrition and facilities.

The variable is AGEFR. Also, the lactation curves reveal a differentiation almost immediately after calving, suggesting that culling of Lact1 animals is not a likely or significant reason for any variation in production. Furthermore, culling of virgin heifers is unlikely to influence subsequent Lact1 production curves since the two categories representing most culls in virgin heifers, namely deaths and open heifer culls, are not represented at all.

At a growth rate or average daily gain (ADG) of approximately 2 pounds per day, breeding heifers will grow 60 pounds per month, and in this herd that will be approximately 2-3 pounds more milk per cow per day for every month increase of AGEFR (from the logic of Observation 1). Since virgin heifers have a high conception rate – 55% plus – it also means that in the above Lact1 production curves there will be more 23-month animals than the other two-month cohorts. This is significant because it means that most of these Lact1 animals will under-perform relative to their cohorts.

Furthermore, the Lact2 lactation curves reveal a similar production and AGEFR pattern. Although these are not the same animals, most of the Lact2 animals that calved at two to 10 months would have calved at 23 months the year before. It is apparent that if a herd has excellent herd fertility and immature heifers, these younger, immature animals will be “locked” into lower Lact2 production. Since the average lactations of many herds in the U.S. is low (e.g., 2.2), it follows that if immaturity negatively impacts both Lact1s and Lact2s, it will seriously impact the entire herd’s production. It is not unreasonable to suggest that these herds effectively never reach full genetic potential. They never “grow up.” They are experiencing the “Peter Pan problem.”

It is not good enough to rely on subjective criteria for breeding heifers. Objective criteria, such as bodyweight, wither or hip height and ADG can greatly assist in determining the best time and size to breed heifers. While body condition score is not included in this conversation, the assumption is made that over-conditioning must be avoided.

1. Determine the mature bodyweight (MBW) of the herd. This is not the average of cull cows. This means weighing a cohort of cows in the 3rd and 4th lactation between 80-120 days in milk (DIM).

2. Weigh either close-up (DCC>260) or fresh cows (DIM<7) to calculate the percentage of MBW of these animals. Close-ups should approximate 95% of MBW; fresh cows should be close to 85% MBW.

3. Determine the difference between desired and actual weights. This will be the increased bodyweight that must be made up by either delayed breeding of virgin heifers or increased ADG.

4. Determine the weight and age virgin heifers need to be to achieve 55% of MBW at breeding.

5. Implement necessary changes and monitor the response by weighing heifers at convenient time periods to ensure a successful outcome.