Why is my heifer diet not working?

Heifer selection and development has a huge impact on the future profitability of every dairy farm. Pat Hoffman, dairy specialist and former professor at University of Wisconsin, recently hosted a PDPW webinar that focused on some of the issues that cause heifer diets to perform poorly.

He discussed over-conditioning, overcrowding, growth variance and over-supplementation, all of which have negative effects on heifer performance and farm finance.

Farmers who adopt a one-size-fits-all approach to feeding heifers can often encounter problems with over-conditioning.

While this is adequate for a 600-pound heifer, younger and older heifers have different energy demands and, therefore, require different diets to prevent over-conditioning.

“As she gets older, her energy demand will drop,” Hoffman said. “Basically, corn silage is too high in energy and they eat too much of it; there’s too many calories in the diet, and we see heifers getting over-conditioned.”

He claims older research on dry matter intake reducing in relation to bodyweight is misguided and instead suggested that farmers should focus on the neutral detergent fiber (NDF) content of the diet. NDF refers to the amount of lignin and cellulose in the diet. Straw and cornstalks contain high levels of NDF and are a cheap way of improving heifer diets. Thankfully, the NDF requirement per day of heifers is straightforward – at 1 percent of bodyweight. It never fluctuates.

By feeding heifers 1 percent of bodyweight in NDF, Hoffman said gut fill can increase more rapidly and intake of corn silage will reduce.

As shown in Figure 1, increasing the NDF content of the diet limits the intake of corn silage. It also has the benefit of reducing cost. Increasing NDF content will affect calorie intake and therefore reduce average daily gain. 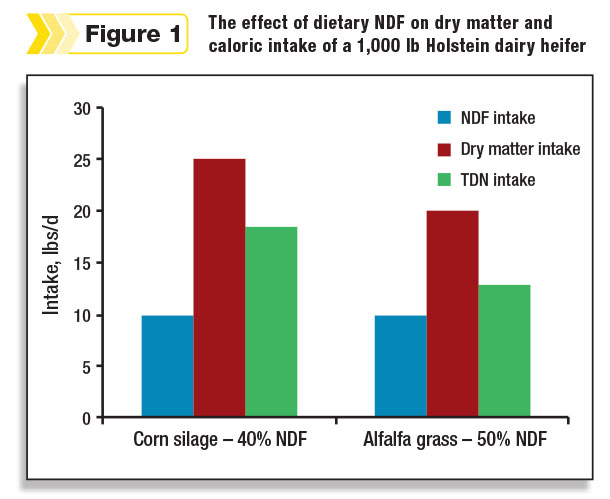 “In reality, we don’t need heifers growing at 2.4 pounds per day; 1.85 pounds per day is sufficient,” Hoffman said. Additional NDF in the diet will allow heifers to grow at a steady pace, without the risk of over-conditioning and the subsequent breeding and animal health problems it causes.

Hoffman said a second cause of poor heifer performance on diets is overcrowding. Lack of bunk space can drastically reduce feeding times in heifers, which has negative future effects. At 200 percent overcrowding (10 heifers for five feed spaces), time eating feed will reduce by 40 minutes per day.

The heifers in this situation will appear to be performing on target, as average weight and total feed consumed appears normal. However, there is actually massive variation in bodyweight in overcrowded pens. This variation arises due to bullying and feed sorting, Hoffman said.

Dominant heifers will feed first, and in the search for the high-energy or most palatable part of the ration, they will push feed away from the bunker. The weaker heifers will be left with the poorer roughage part of the diet and therefore grow slowly.

Apart from the breeding challenges that uneven growth presents, farmers may see issues with “chronic foot abduction” or heifers “toeing out.”

“One hour after you feed your heifers, stand behind them in the pen and look at how they’re standing,” Hoffman said. “Are they splaying their front feet? Are they reaching for feed?” Regular overreaching and splaying can permanently alter a heifer’s stance, with further lameness and mobility issues arising in later life. Providing adequate bunk space will allow all heifers to feed together, consume the same diet and minimize hoof problems.

“How can you feed everyone’s needs if they’re big, small, old, young?” he asked.

Days on feed, which is directly linked to pregnancy rate, must be considered when formulating heifer diets. Hoffman urged farmers to analyze the number of A.I. straws they use on heifers. If a heifer is given more than five chances to breed, the same blanket diet cannot match the needs of this heifer as she matures. At different times, she will be under or over nourished.

Although a tight calving period may not suit some dairies, a short calving and breeding period can simplify the diet requirements as there will be less variation in heifer age. It may also help remove some of the heifers with poorer fertility at an earlier age.

A complex diet with too many supplements may also be a factor in a poorly performing heifer diet.

Over-supplementation of ionophores can also be wasteful because the improved average daily gain and feed efficiency benefits are unnecessary, as previously mentioned in relation to NDF. Ionophores may have a role in coccidiosis control in young heifers, but their use in older heifers is questionable, he said.

Farmers should carefully consider the use of cheap by-products, such as distillers grain and corn gluten.

“These products often contain too much energy, sulphur, phosphorous and fat. If it’s delivered wet, it’s even more difficult to balance the diet,” Hoffman said.

Formulating diets is a crucial management practice on all dairy farms. Hoffman’s advice highlights the importance of taking an overall view of farm practices, facilities and additives before drastically changing heifer diets. For some farmers, a small change could mean more bang for your buck and a big difference to heifer performance. PD

The information in this article was gathered from Pat Hoffman’s PDPW-sponsored webinar, “The Heifer: Is this diet working?,” on heifer diets and performance.