Dave Natzke
Editor's note: This article has been updated to include market commentary. September 2019 U.S. milk production grew by about 1.3% compared to the same month a year earlier, ending an 11-month streak in which monthly year-over-year growth was less than 1%.
Dave Natzke

While much of September’s growth can be attributed to stronger milk output per cow, a reversal in the decline in cow numbers in some major dairy states also played a role, according to the USDA’s monthly Milk Production report, released Oct. 21.

Compared to a year earlier, September’s cow numbers were down 53,000 nationally and down 11,000 in the 24 major dairy states (Table 1). However, those estimates fail to show the contraction in the U.S. dairy herd has slowed or stopped. 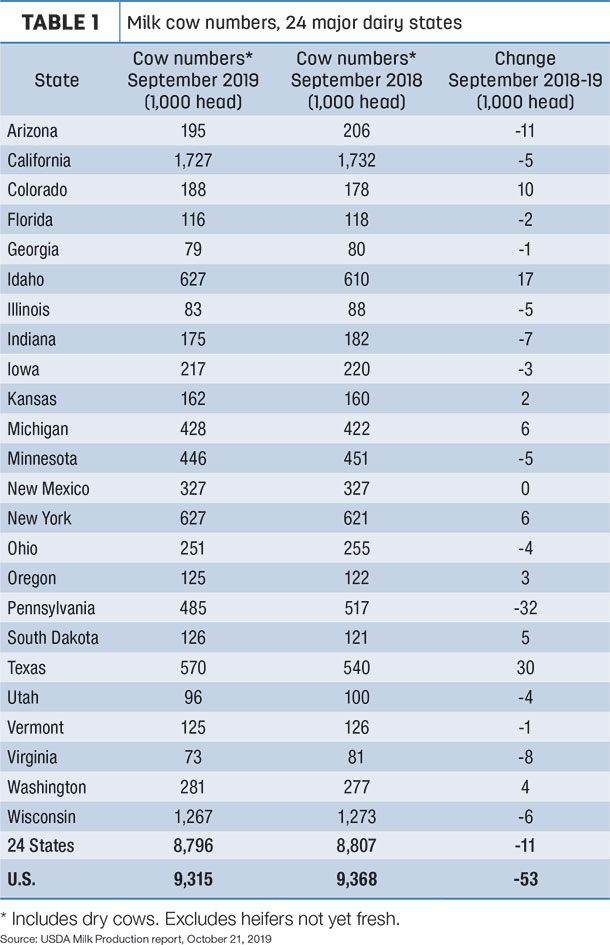 Compared to August 2019, September’s U.S. dairy cow numbers declined just 2,000 head nationally. And, among the 24 major dairy states, September 2019 cow numbers were up 7,000 from August and are now the highest since February. 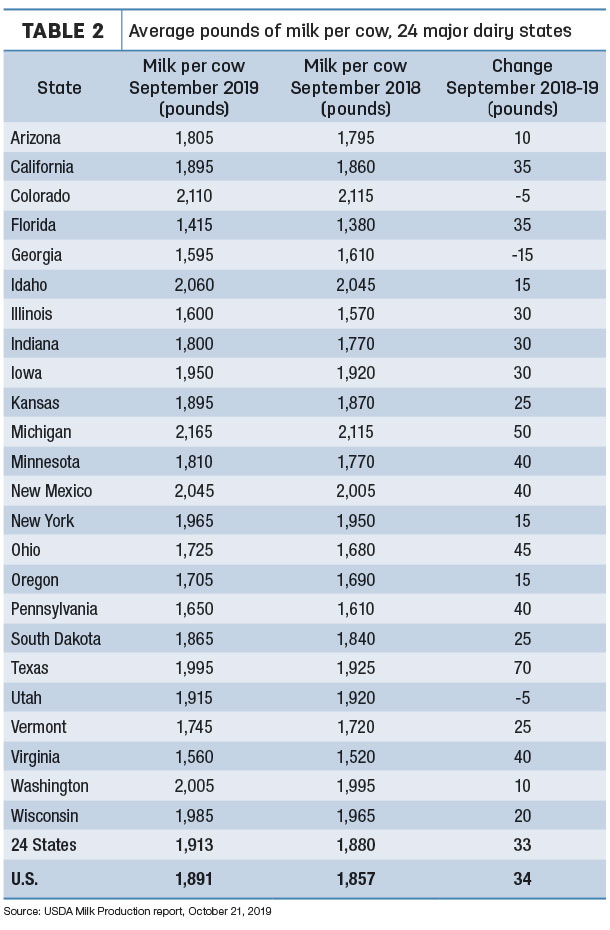 The USDA’s latest outlook report raised milk production forecasts for both 2019 and 2020 but also projects slightly higher prices for most categories of milk. Higher corn and soybean prices are also forecast.

Looking at the next five quarters, the USDA forecasts highest prices in the fourth quarter of 2019, but strength in cheese prices should support Class III and all-milk prices through 2020. The 2020 all-milk price is forecast at $18.85 per hundredweight (cwt), up about 45 cents per cwt from this year’s anticipated average.

The USDA’s Livestock, Dairy and Poultry Outlook report, released Oct. 17, forecasts prices for cull cows (beef and dairy cows combined) to weaken in the fourth quarter of 2019, with the annual average $56 per cwt slightly lower than 2018’s average ($57.43 per cwt). Looking into 2020, the USDA forecast is for another $1 per cwt decline.

In their monthly podcast, they said the improvement in milk prices has provided incentives to boost milk production, but much of the gain appears to be in increased milk production per cow – despite localized reports of lower feed quality.

Looking outside the U.S., Cropp said drought and environmental regulations are impacting milk production in other major dairy exporting regions.

Noting Chicago Mercantile Exchange (CME) futures have improved somewhat, Cropp remains optimistic milk prices will strengthen, averaging in the strong $17s for the first half of 2020 and the strong $18s for the second half of the year, with an overall average about $1 per cwt higher than 2019.

Stephenson expresses similar sentiments and may be even more optimistic regarding prices toward the end of 2020. He doesn’t see any signs of big surges in milk supplies in the U.S. and worldwide, but worries a global economic downturn could negatively impact demand.