Tamara Scully
Bedded pack barns – either deep-bedded or compost bedded – allow cows to freely roam and lie down in any configuration they prefer. Manure is kept in place and managed in solid form.
Tamara Scully

The bedded pack in either system is maintained daily and allowed to accumulate. Animals are housed and fed, and manure is stored, in the same facility, reducing infrastructure costs.

Unlike in an anaerobic deep-bedded pack, a composted pack requires daily rototilling or turning for active composting to occur. Both systems use sawdust, wood shavings, chopped hay or straw, which are added as needed. Full cleanout typically occurs once per year, with the pack spread onto fields at the optimal time. 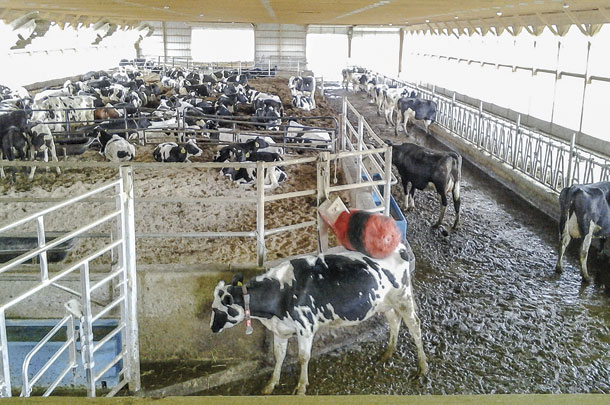 “The barns are quite simple,” Benson said. “The cost of bedding is really the biggest part of the design.”

According to Benson, bedded pack barns eliminate hock issues and are easier on older cows. The reduced capital cost of the system, plus the elimination of a separate manure handling or storage system, are also benefits.

The Hoopers’ 110-cow milking herd, with a mix of grazing-based genetics, has been housed and robotically milked in a new-build composted bedded pack barn since 2015. Previously conventional dairy farmers with a confined herd, the couple left the business only to return and build a certified organic grazing dairy from scratch. The Hoopers’ experience with their composted bedded pack barn has been a positive one.

“Cows are naturally a herd animal. By having a bedded pack, they behave more naturally,” Karen Hooper said. “Heats are easier to see,” as they can readily move among the cows. 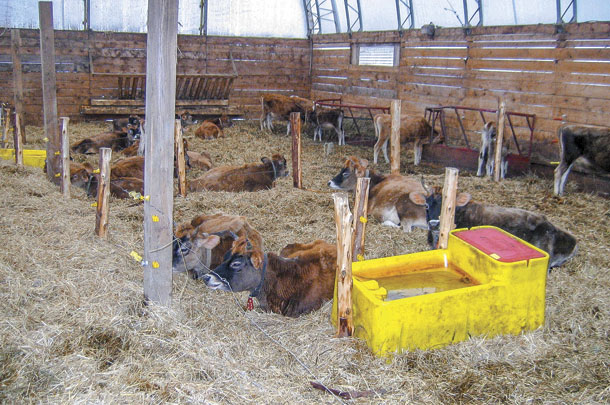 Daily maintenance involves adding sawdust bedding as needed to combat moisture concerns. An internal pack temperature of 120ºF to 130ºF keeps the composting microbes active. The pack builds up all winter to a top depth of about 6 feet, when it is removed and spread on aerated fields each June.

“One large benefit is that once a year the bedded pack is taken out. We use this as topsoil and the best fertilizer,” Hooper said. The bottom 6 inches of the pack is left in the barn, acting as a “starter” for composting the new materials.

The Hoopers’ barn has a separate feed alley where a TMR, consisting of baleage and a small amount of corn with minerals and salt offered free-choice, is fed twice per day. Waterers and cow brushes are located outside of the main bedded pack, near the feed alley.

Weaned calves are separated and housed in a small group pen within the main bedded pack. Maternity pens and a calf area are located outside of the main bedded pack area. The milking herd, which rotationally grazes on 100 acres, has access to the bedded pack year-round. Automatic gates lead them to fresh pastures after visiting the robots. Dry cows and heifers are kept on pasture 24-7 during the grazing season.

The Whittemores too began with a newly built bedded pack barn, transitioning their 60-head herd from a tiestall bank barn with a pipeline. They now milk a certified organic mixed herd of 150 cows with predominantly Holstein genetics. Their milking herd – divided into two separate groups – rotationally grazes on 120 acres of pasture, with each group being moved twice per day, and is no longer housed in a bedded pack system.

“We chose a bedded pack because it allowed us to build a barn without adding the expense of a lot of interior infrastructure,” Kate Whittemore explained. “We also liked the appeal of cow comfort.” 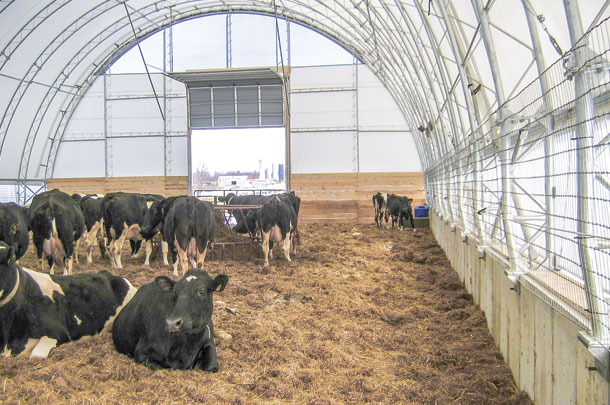 They hoped the composted bedded pack would require a minimal amount of management. Instead, they found themselves rototilling the pack twice per day, spreading fresh bedding daily and coping with increasingly expensive kiln-dried wood shavings or sawdust, at a cost of $40,000 for the winter months, in an attempt to combat moisture concerns and keep the pack at optimal composting temperatures.

Bedding with hay or straw was too time-consuming, didn’t work well and used too much material. During the grazing season, they kept the herd out of the barn completely, finding it was too messy once the pack was cleaned out.

The Whittemores fed baled forages topped with grain in a south-facing feed alley, which did not have a curtain. They did not have a separation system in place on the bedded pack, finding that maintaining the pack was too difficult with the systems they tried. These two issues led to some metabolic concerns in the herd.

Overcrowding further contributed to this. They soon were faced with the decision to spread manure daily from the feed alley and holding area or build a pit. 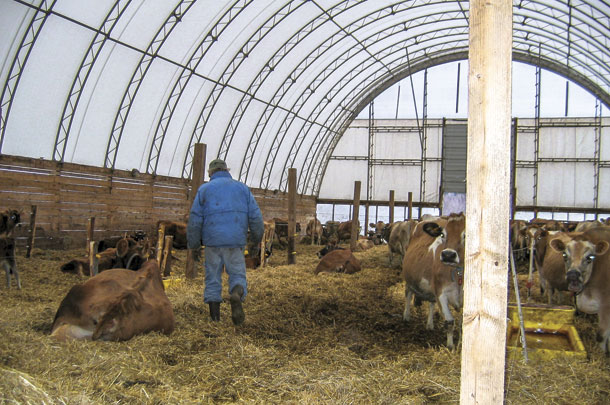 “Cleaning, raking and bedding the freestall takes close to double the amount of time the bedded pack did, but we are also managing 50 percent more animals,” Whittemore said. “We have sand beds that are hand-raked daily and bedded weekly in the winter,” at half the cost of the bedded pack system.

The Whittemores acknowledged some modifications to their composted bedded pack may have produced a better outcome.

“We overbuilt our barn, designing the concrete pack walls to withstand a lifetime of use,” Whittemore said. “Fans might have helped reduce the need for as much bedding. We definitely could have benefited from a permanent system of division for groups within the bedded pack barn.”

“This application is not for everyone,” Hooper said. “It needs to be taken care of daily. You need to pay attention to how it is acting: too wet, too dry, too cold, too much moisture in the air. Weather plays a big part of it. In general, our cows are not only very comfortable; they stay healthier. We can sell replacement heifers instead of replacing cows.”

PHOTO 3: Example of simple bedded pack barn. Cows are fed and watered on the pack rather than a feed alley. Photo provided by Fay Benson.