Through estrous synchronization, producers can increase the number of cows that are getting pregnant within the first 21 days of the breeding season, and this can mean major returns at weaning time. How? If we think about the fact calves typically gain 1.75 to 2 pounds per day while on the cow, we can see how older calves are likely to be heavier and more valuable at weaning.

Through the use of estrous synchronization, producers are able to reap the benefits of reproductive technologies, even if A.I. is not right for their operation. Natural service synchronization is the use of a synchronization protocol to increase the number of cows cycling at the beginning of the breeding season and using herd bulls (natural service) to inseminate the cows and heifers, instead of using A.I.

• 1 shot PG: With this protocol one shot of prostaglandin (PG) is given on the day bulls are turned out. Females that respond to the shot would be in heat for five days following the injection. This would result in approximately 75 percent of cyclic (having normal estrous cycle) females to be in heat over that five-day period.

• Day 4 PG: Females are gathered four days following the turnout of bulls and given a single shot of PG. At this point, bulls will have bred 19 to 20 percent of all cyclic females, with the remaining females coming into heat within the next five days. In theory, 100 percent of all females that are cycling will be in heat within the first 10 days of the breeding season. It is important to note that any females bred in the first four days of the breeding season will not respond to the PG shot and it will not cause them to abort, but a shot must be given on day 4 – no flexibility!

• 7-day CIDR: A CIDR is inserted into the female for seven days and then removed on the first day of the breeding season. Bulls are turned in on the day or day after the CIDR is removed. The benefit of this protocol is it has the potential to jump-start estrus in some females that are not cycling yet. Keep in mind that a CIDR should not be used in a female that is less than 30 days post-calving. 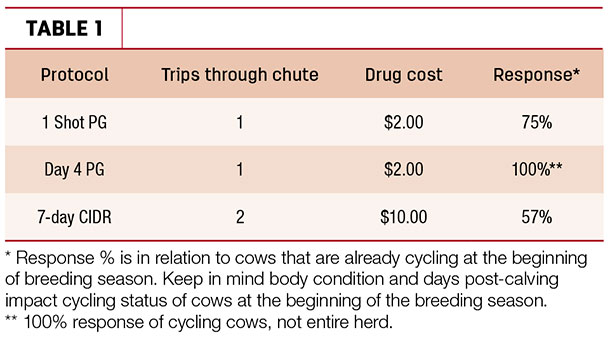 With the purpose of synchronization being to bring as many females into heat at the beginning of the breeding season, some considerations should be taken into place for bull power. If using a natural service synchronization protocol, a stocking rate of 1-to-25 should be utilized. In addition, every bull should have a breeding soundness exam. The age and breeding experience of the bull should also be taken into consideration, with older bulls typically covering more cows and bulls under 2 years old not being recommended for a natural service synchronization program.

Overall, if used in conjunction with other successful management practices, natural service synchronization is a great tool for producers to increase the number of cows in their herd becoming pregnant within the first 21 days of the breeding season and increase overall weaning weights.

PHOTO: If using a natural service synchronization protocol, a stocking rate of 1-to-25 should be followed for better success. Staff photo.