Rebuilding hope from the ashes of Ashland

The wildfire scorched an area of 2 million acres, 17,000 livestock animals and took seven lives and injured several, including a number of firefighters.

For Mark Gardiner, the speed and ferocity of that fire was stunning to watch as it blazed across his land, his cattle and even his own home. The devastation was an unparalleled event.

That was, until he saw the recovery.

“What’s so touching to me is: People are really good,” said Gardiner, who co-owns Gardiner Angus Ranch with his brother Greg in Ashland, Kansas. “The whole United States, and frankly the whole world, has run to help us. And these ranchers who are on that fire department, they fought for two straight days; they may have lost a home or two to focus on the homes they saved.” 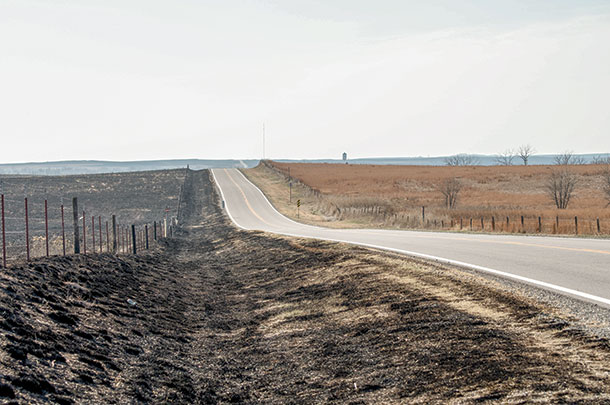 Dr. Randall Spare, president of Ashland Veterinary Center and close friend to Gardiner, witnessed the same devastation that hit the community over a two-day period. The wind-fueled fires spread at a stunning rate, going 80 mph at one point and creating a wall that was 30 miles wide. 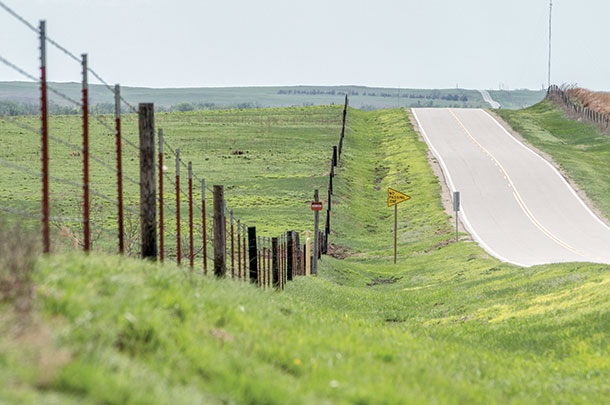 Spare acknowledged how far the fires spread across four states and took a devastating and painful hit on families in Texas, where most of the fatalities occurred. But for the Ashland community, lives were spared.

To both men, the experience was a powerful witness to how the Lord’s inspiration works, especially through the hands and labors of countless people who acted swiftly in crisis and in the aftermath.

Blessed are they that mourn, for they shall be comforted

Spare said community members received calls from around the region the day of the fire, inquiring of ways to help. First and foremost, Spare said, was to help those needing help with injured and suffering animals.

“It’s those people who came to help us,” Spare said, who organized veterinarians coming from Kansas State University and neighboring areas to assess and euthanize cattle. 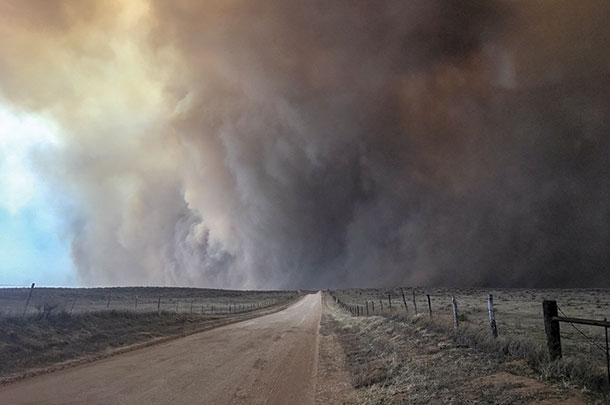 When a woman called worried about her elderly husband unable to check their cows, he sent Dan Thomson from KSU with directions to their house and instructions to take a gun for cattle suffering the worst.

“Our primary goal was to call people,” Spare said. One producer, named David, called and said his 700 cows were saved, but the ranch was entirely burned, with only two bales of hay on hand.

“I said, ‘You need more bales, and there are people calling to help; can we direct traffic to you?’”

“It was those phone calls when emergency preparedness people couldn’t do that. But because we had relationships with people, we could call them up and say, ‘Can we send loads of hay to you?’”

Blessed are the merciful, for they shall obtain mercy

Within days, the logistics turned from helping find cattle to helping direct all the supplies coming in. The Ashland community had a foundation that quickly assembled its members to determine where resources could be directed.

“We would call older gentlemen, people who didn’t have as much support,” Spare said. “We made the effort to call people that we knew, if they didn’t have a social presence or awareness.” 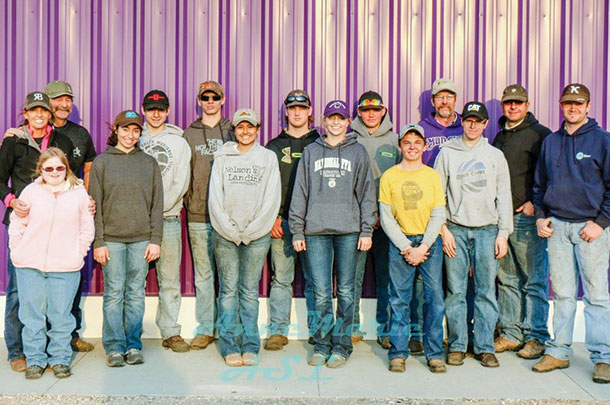 Spare said a specific picture on Facebook of cattle being cared went viral and led to a call from a nearby vet in west Kansas.

“She said, ‘What can I do?’ Spare recalled. “We were trying to manage calves’ health because they didn’t have a mother, or the mother wasn’t there. Many of them were born right after the fire, so colostrum intake wasn’t there.

“So she came and picked these (calves) up. She took them back and put them in a calf ranch. Every day they had was a good day, the rest of their lives.”

Ye are the light of the world. A city that is set on a hill cannot be hid

Gardiner said the entire fire and recovery has reminded him of how the light of motivation comes from within people’s hearts to give so generously.

Gardiner said aid even came from the towns in Texas where ranchers lost lives rescuing cattle from fires.

“Several of those people that lost lives in Texas, their parents sent us stuff. How cool is that? How do you consider that?” Gardiner said.

Spare related the story of a man who rode into town on a motorcycle from east Kansas, ready to make an offer to help, saying he wanted to donate some cattle, more specifically his upcoming calf crop.

“He said it was a hundred. And right then I had to turn around and walk away; I got emotional.”

Insisting that his fall-weaned calves go to somebody who lost everything, Spare and others worked over the summer and found a volunteer fireman who lost all his cattle. The donor gave 40 head of heifers to that producer to start his cow herd again.

“Because we had relationships in the community, we were able to point those in the right direction.”

After Thanksgiving, Spare received notice of a group that gathered $36,000 and wanted to send it to his clinic.

Instead, Spare said, “How about I give you four or five names you give those checks to.”

“We tried to show people we weren’t worried about ourselves. But because of the trust people have given us as veterinarians, a lot of us are in a position to do that. We don’t take that lightly.”

For where your treasure is, there will your heart be also

Events of the Ashland fire weren’t just hitting close to home for Gardiner. They did hit home.

As conditions of the fire worsened throughout the first day of the fire, the Gardiner family discovered their home was right in the path of the quickly moving flames. After checking on neighbors, Gardiner and his wife returned to the house to help get horses out and attempted to pull their dogs out of the house.

Then came the wall of black smoke. Soon the couple were separated. Eva found her way to a pickup, and Mark kept trying to gather the pets. Once he called her and saw she left, he knew to leave immediately.

Gardiner has an odd habit in winter. Rather than scrape or defrost his frozen windows, he drives with heaters on but rolls out of the driveway with his door open, watching the edge of the path to see if he’s driving straight.

Now, against a wall of black, he had to do the same thing. Open the door and navigate the smoke by looking at the gravel as he slowly drove away.

“I thought it was kind of fun but, really, the Lord above was preparing me to get out that day. Because I was saying, ‘I got to get out of here. I’m surrounded by fire, and I need to get out of here quick.’ And so I followed that road out.”

Behind him, his house was done. His barn would be next. But it didn’t matter.

I will not leave you comfortless; I will come to you

This will be the second Christmas for Clark County, Kansas, and the surrounding areas of Texas, Oklahoma and Colorado that were hit by March 2017 wildfires.

Grasses that were charred and left in dry Kansas sand have sprung back to life. Ranchers that lost herds have made a return with smaller herds. Hundreds of miles of fence that were charred have been reinstalled – in many cases, nicer, brighter and newer than before. 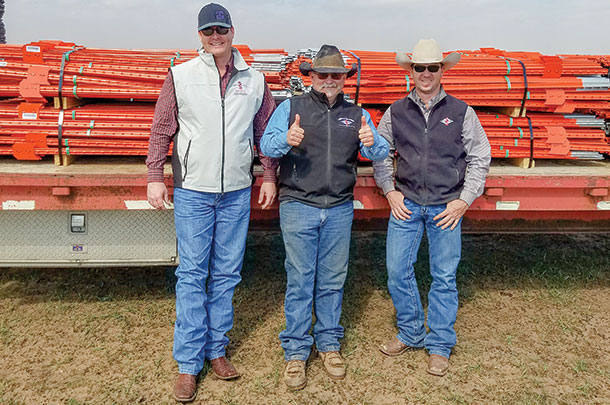 The sense of community in Ashland and other towns like it is stronger, built by loss, tragedy and reaffirmed by generosity, charity, work and love.

“When I look at the resources and the help,” Gardiner said, “there’s no substitute for relationships. We didn’t expect to be made whole, and the reality is: Our community isn’t whole yet. But we’re dang sure a whole lot better off than we would have been if people hadn’t come to help us.”

One witness to that cycle of giving: When wildfires hit the state of Montana in summer 2017, producers from Kansas hit in March were among the first to send hay and supplies up north to help producers in the region.

As for the Gardiner home, a new foundation was placed in fall, but the family will go another holiday in an apartment.

“My youngest asked me, ‘Do you think we’ll be home by Christmas?’” Gardiner recalled. “And I said, ‘Which Christmas are you talking about?’”

And yet Mark Gardiner doesn’t consider himself a man struck by tragedy.

Showing a slide of a cow and her calf born one day after the fire, Gardiner says they are a symbol for survival and hope in life.

“We didn’t lose a single thing. Why were we spared? I’m here to tell you, we have more work to do. Our Lord gave us the opportunity to move forward. And that is what we do.”

PHOTO 1: The view volunteer firefighters, ranchers and community members encountered as they rushed to fight the fire.

PHOTO 2: This photo shows the smoke entering Ashland from the east side of town.

PHOTO 3: This photo was taken on April 18, 2017, entering Ashland, just over a month after the fire.

PHOTO 4: This photo gives a look at the wall of smoke as the fire headed toward residential areas.

PHOTO 5: A crew of FFA kids from Westmoreland, Kansas, helped with recovery efforts.

PHOTO 6: The community drop at the Gardiner ranch for Ashland producers collected donations from producers all over the U.S. Hay and supplies came for weeks. Mark Gardiner estimated that Clark County received 50,000 large bales from generous donors.

PHOTO 7: Select Sires was one of the generous contributors to the Kansas community with fencing supplies. Photos provided by Mark Gardiner, Gardiner Angus Ranch.