Solar shade is the name, sustainability is the game and clean energy is the aim. With the beef industry facing continuous pressure from environmentalists and heat stress in feedlot cattle incurring great financial losses annually, producers are seeking inventive ways to simultaneously improve animal health and decrease high electricity costs.

Kate James is a freelance writer in Texas and a former editorial intern with Progressive Cattle.

Dr. Brad Heins, associate professor of dairy management at the University of Minnesota and researcher at the West Central Research and Outreach Center in Morris, Minnesota, implemented this idea at the center’s 300-cow pasture to provide shade for the herd and energy to power milking equipment. “The concept of solar grazing started because we wanted to reduce heat stress and produce energy to utilize in our dairy farm,” Heins says. “Our goal is to have a net-zero dairy.”

Heins’ research study on the use of photovoltaic systems to shade grazing cattle evaluated four groups of cows during four periods of the summer. Two groups had access to solar panel shade and two groups had no access to shade. The results showed that shaded cows had lower respiration rates and body temperatures during afternoon hours than non-shaded cows. Heat stress reduction is not the only benefit of solar panel use. “We have also been able to produce about 4 megawatts per year to power lighting, equipment and other facilities we use on a daily basis,” Heins says.

Beef producers can parallel the dairy industry’s agrivoltaic development by implementing solar shade in feedlots, which often have limited cover for cattle. Nebraska entrepreneur, Mitch Minarick, has done just that. His Ag tech company, FarmAfield, is an online marketplace that connects consumers who want to invest in agriculture to farmers who raise the product, and the benefits of its solar panel research are three-fold: shade for feeder cattle, energy for producers and an environmentally friendly impact consumers can support.

FarmAfield is currently working with the U. S. Department of Energy to develop a functional solar power system for industry producers. Minarick says the goal is to create hardware custom made to work in a feedlot so that it does not interfere with maintenance operations. “We offer a design that can be attached to multiple types of fences found in feedyards and a feedbunk, where cattle spend a lot of their time,” Minarick says. “We will also have a freestanding design that can go in the middle of the pen.” 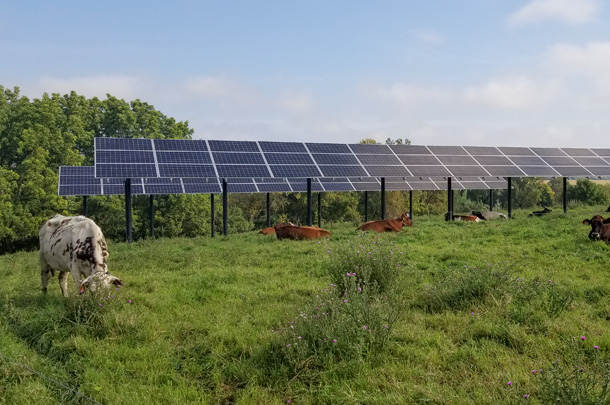 The photovoltaic system doubles as shade for cattle during hot summer months and energy to power the dairy’s milking parlor. Photo provided by Brad Heins.

Though it makes sense to provide shade where cattle gather most frequently, the freestanding design could prevent overcrowding and increase airflow. Minarick says it also would stand high enough for equipment to fit under it for cleaning purposes. Ultimately, the producer will decide which design best suits the pen and weather conditions of the area and cattle. The solar panels can provide power to irrigation systems, mills and any other electrical needs fed by the electrical meter at the feedyard. Additionally, they could help with improved meat quality and performance gains in feeder cattle by reducing heat stress.

A research study conducted by Jingjun Wang, assistant professor at the China Agricultural University and research assistant at the University of Minnesota, “estimated that total annual economic losses to livestock industries caused by HS [heat stress] amounted to between 1.69 and 2.36 billion dollars across the United States.” According to the University of Minnesota Extension, heat stress can decrease feed intake, consequently reducing weight gain. Providing shade is one long-term solution that could directly impact the health and performance of feeder cattle.

The drawback to installing solar panels is finding enough capital to finance the project without depleting the bank, then turning a profit.  “Some producers don’t want to bear the upfront cost, so we help them find outside investors that want to hold the project for 10 years,” Minarick says. “Instead of paying their utilities, they’ll pay those investors. Then, after 10 years, they get free power, which can go for 20 more years beyond that point.”

Minarick says for a young producer just starting out, installing solar shade is an economic no-brainer. “Some of these places have pretty high power bills,” Minarick says. “These projects can definitely be paid off in less than 10 years, then long term, you could potentially have 20 years of free power.”

In the future, Minarick says they plan to expand their solar panel research and implementation to include cow-calf operations as well.

Since that time, Ritchie Industries has developed into the leader in watering innovation and now manufactures a complete line of livestock and horse waterers to the highest specifications in the industry. Automatic waterers are our focus and o...