Do you know the cost of one case of clinical mastitis for your herd?

Clinical mastitis is one of the most common diseases in dairy herds, and unfortunately, one that may cause huge financial losses. However, the cost of one case of clinical mastitis varies from farm to farm.

For instance, the incidence of mastitis varies from herd to herd, and the phase of lactation when it occurs may also be different. The average milk production of the herd also impacts the total cost of clinical mastitis, and more-productive herds suffer with higher costs due to a greater loss in milk production.

Most cases of clinical mastitis happen during the beginning and toward the end of the lactation. Mastitis negatively impacts production, reproduction and the productive life of lactating cows. However, it is not uncommon to see farmers estimating the cost of a case of clinical mastitis as solely the costs associated with treatment and discharged milk. Clinical mastitis costs go beyond treatment costs (therapy and labor) and discarded milk. There are other direct and indirect costs. Direct costs include diagnostics, therapeutics, non-saleable milk, veterinary service, labor and death loss. Indirect costs included future milk production loss, premature culling and replacement loss, and future reproductive loss. Destination of waste milk should also be taken into consideration as it will affect the general herd economics. The greatest losses are due to a persistent effect on the cow’s milk production, and factors such as the cost of replacing heifers, the herd’s culling rate, treatment protocol and others will directly impact the cost of one case of clinical mastitis and its total economic impact in the herd.

Therefore, farmers should know their own costs to make better informed decisions regarding treatments, culling, protocols and management practices that may result and financial gains and better animal welfare. Funded by the California Department of Food and Agriculture, our team developed a user-friendly clinical mastitis calculator. Dairy farmers, veterinarians and consultants can download it and use their own inputs (milk price, incidence of clinical mastitis, feed price, average milk production, culling rate, cost of raising heifers, etc.) to calculate the average cost of a case of clinical mastitis in their herd. Below, we simulated a herd to navigate the audience on how to use this tool.

For this example, we will use a 1,000-cow herd with an average milk production of 25,600 pounds per cow per lactation (Figure 1). The incidence of clinical mastitis varies among dairy farms. Based on data we obtained from large dairy farms in California’s Central Valley, an incidence of 12% is realistic; i.e., for every 100 lactating cows in the herd, 12 will have at least one case of clinical mastitis, on average. 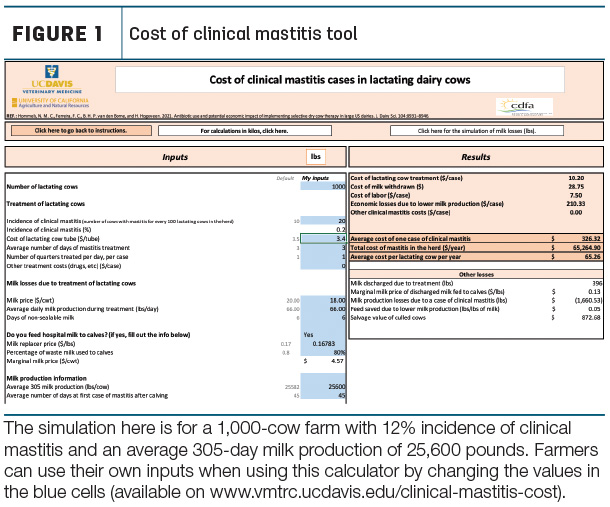 Besides the costs associated with treatment and milk discharged, cows with clinical mastitis produce less milk for weeks after the clinical case. We used published research to estimate milk losses based on milk production at 305 days in milk and on the median days in milk when cows have their first case of clinical mastitis (Figure 2). Median is a better statistic to use because it does not suffer from outliers (for instance, if most cows have mastitis up to 21 days in milk and only a few have it at the end of lactation). Farmers should calculate their median days and add it to the spreadsheet, so milk-loss estimates will be adjusted according to the average days in milk when cases of clinical mastitis happen. We then calculated the losses due to milk that could have been produced if the cows were healthy and added those losses to the total cost of clinical mastitis. We adjusted feed costs due to a lower milk production, assuming that for every hundredweight (cwt) of milk, cows would consume 40 pounds of dry matter. All these inputs can be adjusted using the tool. 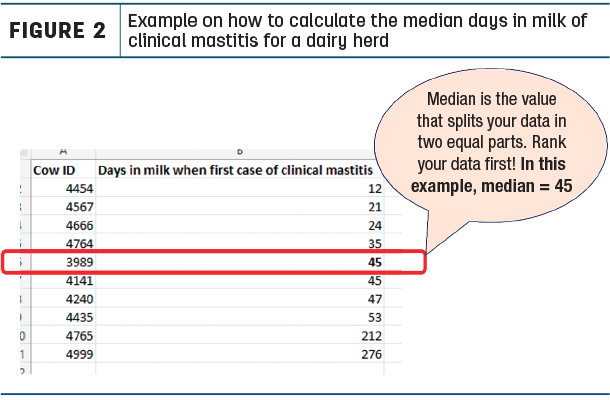 Furthermore, because cows with mastitis have a greater risk of culling, we also accounted for the extra costs due to a shorter productive life of cows with mastitis. This is especially important when the costs of raising heifers are high, as it impacts the total replacement cost of the herd. Labor costs were $15 per hour, and milk price was $18 per cwt. 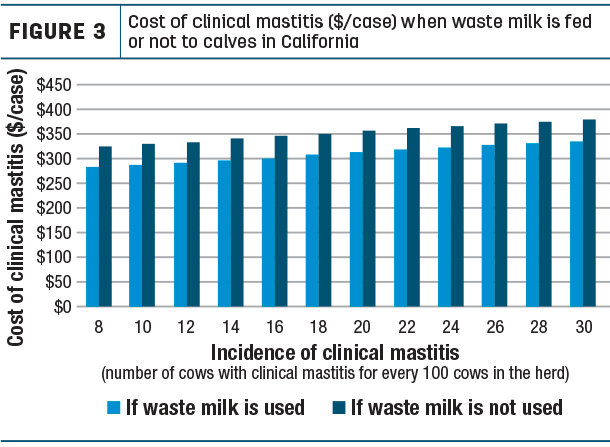 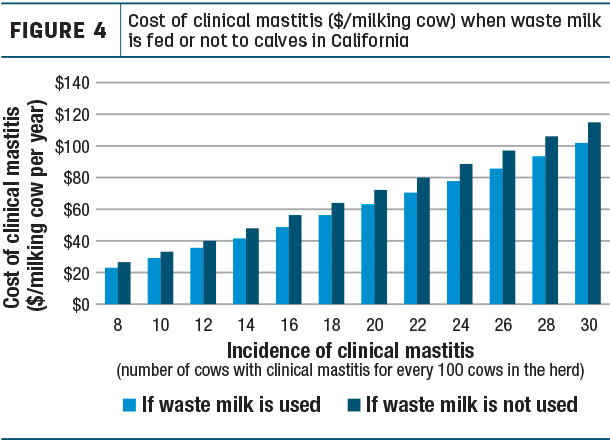 Mastitis is expensive! It is not possible to eliminate mastitis from dairy herds, but management that reduces its incidence will likely pay off. Accurate decision-making regarding mastitis control relies on understanding the economic impacts of clinical mastitis. This economic model is designed to be customized for specific dairy producers and their herd characteristics to better aid them in developing mastitis control strategies.

If you have any questions about the tool, please email the authors.