Beverage milk (Class I) typically carried greater value than milk sold for manufacturing uses (Classes II, III and IV) such as ice cream, cheese, butter and milk powders. The FMMO program established minimum prices for each class, pooled the revenue from the different classes for each federal order, and established a uniform minimum price for the producers qualified in each order.

The decline in Class I sales significantly impacts federal order pools. Having less Class I revenue to share with manufacturing milk lessens the incentive for manufacturing milk to participate in orders. Furthermore, the Class I price often isn’t the highest of the classified prices, and therefore, manufacturing milk, if pooled, would be required to pay revenue to the order pool instead of drawing revenue from it. In those instances, suppliers of manufacturing milk often opts not to be pooled, commonly referred to as “depooling.” Some orders discourage depooling by restricting how quickly depooled milk can be repooled in subsequent months.

Depooling occurred occasionally since order reform, but never on the scale experienced from June 2020 through May 2021. Unprecedented market events and the resulting price relationships led to massive volumes of Class III milk being depooled. Due to the staggering economic disruption caused by the COVID-19 pandemic, the USDA began buying cheese for the Farmers to Families Food Box program. Cheese prices spiked to record levels, and Class III prices followed suit, far outpacing the prices of the other three classes. As a result, Class III handlers depooled milk rather than make substantial payments to order pools.

However, normalcy only lasted a few months. Depooling returned in November 2021, only this time it involved Class IV milk. Declining milk production, both in the U.S. and globally, coupled with strong demand for butter and milk powders, led to Class IV being the orders’ highest class price. As a result, Class IV handlers have opted to depool milk from last November through at least March 2022 rather than to make payments to the order pools. The fact that Class IV is being depooled isn’t as noticeable because PPDs have remained positive. However, PPDs would have been higher without depooling. 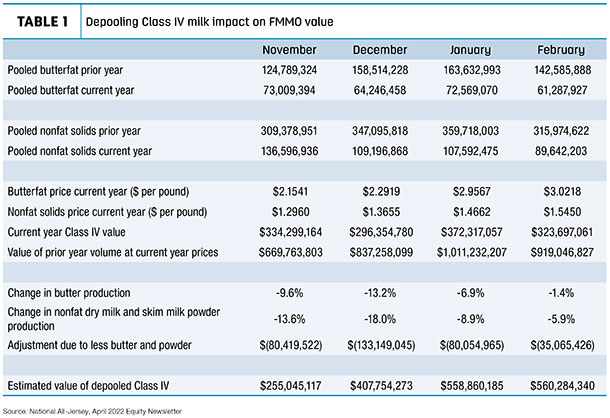 However, not all the reduced volume of pooled butterfat and nonfat solids can be attributed to depooling. USDA’s Dairy Products report showed that November 2021 butter production was 9.6% less than November 2020, and nonfat dry milk/skim milk powder production was down 13.6%. Therefore, an adjustment needs to be made to the expected November 2021 revenue to account for fewer Class IV products being processed. Reducing the expected butterfat revenue by 9.6% and the expected nonfat solids revenue by 13.6% results in $80.4 million less expected Class IV revenue.

With this adjustment it can be estimated that depooling reduced Class IV pooled revenue by $255 million in November 2021.

Employing the same methodology for December 2021, January 2022 and February 2022 results in approximately $1.78 billion of Class IV revenue being depooled across the four months. (While March 2022’s pooled pounds of butterfat and nonfat solids are known, the Dairy Products report for March wasn’t released until early May.) Looking to the horizon, an end to this round of Class IV depooling may be in sight. May’s Class I base price set a record high, and butter and nonfat dry milk prices are retreating from their recent lofty levels.

Why is depooling important? The two foundational tenants of the federal order system are to establish minimum prices for milk’s various uses and to pool revenue. When one class of manufacturing milk carries the highest value and is removed from pooled revenue, federal order uniform prices are less than they would have been without depooling. Finally, a basic principle of fairness seems to be violated when handlers of manufacturing milk can opt to draw revenue from order pools when their milk value is less than other classes but avoid sharing revenue when their milk value is higher than other classes.

Editor’s note: Administrators of the 11 FMMOs will report April 2022 uniform milk prices, producer price differentials (PPDs) and milk pooling data, May 11-14. Look for Progressive Dairy’s monthly review of the numbers and their potential impact on your milk check.