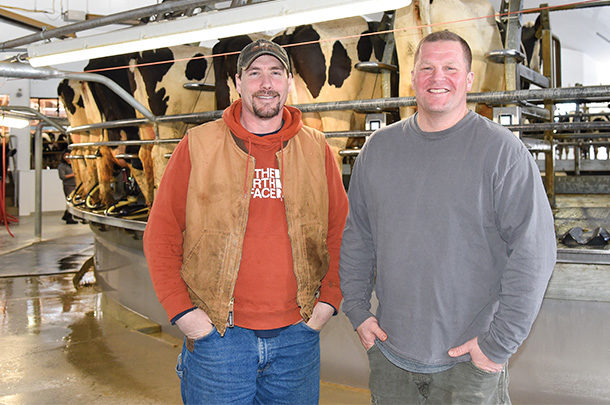 This timed breeding protocol allowed producers to save time by using reproductive hormones across their herds, leading to higher conception rates and more money in their pockets.

It’s rare to walk onto a dairy these days and not find a collar, eartag or ankle band adorning each member of the herd. Monitoring systems have been a popular investment across herds in North America, reducing labor, time and money – resulting in more cash to invest elsewhere.

How can tools like Ovsynch and monitoring systems improve your reproduction protocol when used in tandem?

Progressive Dairy talked with owner and herdsman Jason Benthem of Benthem Brothers Dairy in McBain, Michigan, about using a monitoring system alongside a timed A.I. program on his milking herd.

1. Eyes on every cow

According to Benthem, the use of a monitoring system was an investment that paid off rather quickly. Benthem Brothers began using CowManager on their entire herd in 2014 after experimenting with a different type of monitoring system – this being used primarily on open cows.

For Benthem, having “eyes on every cow” with the new system has been crucial to the success of his reproduction protocol.

His 2,600 Holsteins are currently enrolled in a dual protocol, using both reproductive hormones and activity monitoring to successfully breed cows with less labor and cost.

At 75 days in milk (DIM), cattle receive their first prostaglandin injection. At 85 to 90 DIM, cattle will receive their second shot of prostaglandin – this is typically where cattle will be bred for the first time if a heat is detected by the system. Cattle that have still not shown a heat will be checked by the herd veterinarian to determine what the next steps should be, whether that is implanting a CIDR or another shot of prostaglandin. Benthem begins a timed A.I. protocol (Double Ovsynch) on day 97 for cattle who have not shown a heat or been bred.

“I’d say we’re only putting 10 or so [cows] on Ovsynch every week,” Benthem said. “That’s not very many. It’s saved a lot of labor, not giving five shots to each cow. It’s saved a ton of time. You’re also catching cows at the 21-day window if they didn’t settle, and that’s huge, too.”

In herds using an Ovsynch system, it is common for protocol to require a minimum of five to seven injections per animal within one month. If that animal does not settle, the process repeats itself. That’s a lot of needles.

Benthem said he believes giving injections judiciously is the way the industry is moving.

“You’re not going to be able to give shots like you used to,” he said. “I think industry standards are kind of leaning that way; things are getting stricter as far as the use of antibiotics and hormone use.”

Another trade-off Benthem noted was the reduced amount of lock-up time. Cattle aren’t standing in the manger for hours on end as shots are given and other cattle are inseminated, resulting in better health performance across the herd.

Let’s say you’re running a Double Ovsynch program in your milking herd of 1,000 cows. You have around 30 cows who are approaching 65 to 70 DIM. At day 55, you start with Presynch and give each cow a shot of prostaglandin. It takes roughly 30 to 45 minutes for these cows to lock up in headlocks after being fed, around 15 minutes for you or your employee to gather the supplies needed to give 30 shots of prostaglandin. By the time you make your way to the pen, give the shots needed and then put supplies away, you’ve clocked in about an hour-and-a-half – just to give the initial Presynch shot. In a Double Ovsynch program, you’ll give around six shots before insemination for a grand total of about 10 hours of labor.

Depending on your herd size, that number may or may not be significant. Regardless, it is money being spent. With monitoring systems, those 10 hours can go to something of greater importance.

4. Getting cozy with your herd

Catching heats from observation is becoming a lost art. With timed A.I. protocols, there’s no need for employees to be able to recognize a cow in heat, as they are inducing her cycle. Sure, this is saving time watching cows, but could it be costing you money?

Teaching employees how to recognize behavior that might signal a cow coming into heat can also teach them other important skills on identifying problems within a herd. Being more aware of how cattle behave normally can help employees catch a sick or a lame cow faster, getting her the treatment she needs to continue making you money.

Though monitoring systems and A.I. protocols are useful tools that can eliminate time spent watching your herd, it’s important for you and your employees to develop basic husbandry skills instead of completely relying on technology or reproductive hormones.

5. Cash in your pocket

“Benthems have saved tremendously in labor because they’re not giving all the cows five to seven injections each month,” said Ray Nebel of CowManager. “The conception rate probably isn’t as high as a Double Ovsynch program; it’s in the 40 to 50 percent range – but because they’re saving so much in labor and injection costs, they really feel there has been tremendous savings.”

The turnaround period between when a cow calves and when she is confirmed pregnant is one of the most crucial points in her lactation. Using monitoring systems and Ovsynch protocols to your advantage could shorten the open interval, leaving more cash in your pocket.