The debate over greater price transparency headed to Washington in late April, as both the Senate and House Agriculture committees held hearings on proposed legislation mandating more cash price trade in beef markets.

The Cattle Price Discovery and Transparency Act (S.4030), sponsored by Sens. Chuck Grassley (R-Iowa) and Linda Fischer (R-Nebraska), pushes for multiple price discovery points in the negotiated cash market to boost competition for cattle prices. Cash market participation is being outpaced by feeders’ and packers’ preference for alternative marketing arrangements (AMAs), and the markets have come under closer scrutiny following major market supply disruptions in the past three years. 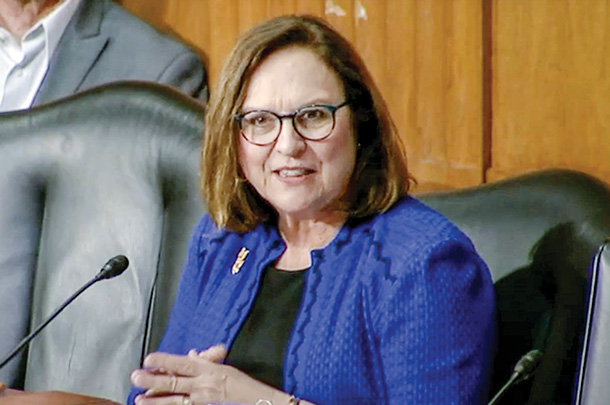 Sen. Linda Fischer (R-Nebraska) speaks to the Senate Ag Committee on April 26 on the merits of the Cattle Price Discovery and Transparency Act. Courtesy photo.

The Grassley-Fischer bill aims for greater participation in negotiated buying on the cash market, given the number of cow-calf producers who are struggling to sell cattle with the popularity of formula pricing. The bill was drafted in late 2021, then saw revisions before the current hearings. Key provisions include:

The bill already has 19 bipartisan co-sponsors, including 11 members of the Senate Ag Committee. Grassley and Fischer represent two states with two major cattle association groups supporting the legislation and its support for stronger movements to cash markets.

“This bill 4030 is true compromise,” Grassley said. “Many producers in the northern Plains want more intervention to ensure a robust cash market. These producers support a bill that would even go further than what Fischer and I have compromised. So the bill doesn’t go far enough for some organizations, and it goes too far for some others. For that reason, I think we have something that ought to fly here.”

Justin Tupper, owner and operator of St. Onge Livestock in South Dakota and vice president of U.S. Cattlemen’s Association, said independent producers are losing ground to corporate feeders and being priced out when their product is at its highest demand.

“We as cattle producers understand and want the packer to make money. That makes the whole system work,” Tupper said. “But since 2015, corporate packers’ gross margin has ballooned from an average of 100 to 200 dollars a head, to well over 1,000 dollars a head. Packers have enjoyed unbelievable profits harvesting around 120,000 head per day, while cattle producers go out of business and consumers pay double or even triple at the meat counter.”

Julie Anna Potts, president of the North American Meat Institute, testified that the bill could have negative impacts on certain regions of the country, while leaving the Iowa-Minnesota region relatively untouched. “Leading agricultural economists have determined Grassley-Fischer bill’s latest draft remains costly to producers, especially producers in Texas, Oklahoma and Kansas where the majority of U.S. fed cattle are raised,” Potts said. “Due to a shrinking herd and sustained consumer demand, cattle prices are at seven-year highs without federal intervention in the market.”

Fischer, herself a Nebraska cattle producer, noted how industry voluntary efforts over the past two years to increase negotiated trade on spot markets ultimately failed “because of packers’ lack of participation.”

She also questioned whether all AMAs are based on the standard of quality beef produced, instead of other factors built through partnerships with the largest packers, noting that in June 2021, the USDA Agriculture Marketing Service (AMS) indicated 18% of AMAs “have no premium or discount associated with them.”

“I agree that AMAs may be important to certain value-based marketing systems. But there are a large number of cattle procured through AMAs to reward quantity, not quality.”

Fischer also submitted a letter of support from the Nebraska Cattlemen that noted, “None of our producer members we encouraged to testify were willing to put themselves out front for fear of possible retribution by other market participants, an unfortunate reality of today’s cattle industry.”

“This concern demonstrates an imbalance in market power,” Fischer said. 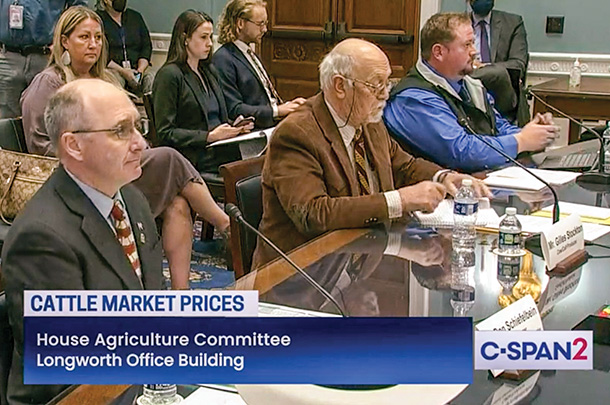 From left: Don Schiefelbein, Gilles Stockton and Coy Young sit before the House Ag Committee on April 27 for a hearing on beef price transparency. Courtesy photo.

On the House Ag Committee, testimony was heard from two cattle producers, Coy Young from northern Missouri; and Gilles Stockton of Grass Range, Montana; both advocating for greater price discovery and against the ability of packers to hold captive supply of cattle while being able to heavily influence the cash negotiation price when the largest four packers process 85% of the industry product.

Stockton pointed to research from Georgetown University stating that for every 1% increase in the amount of cattle procured through AMAs, there is a 5.9% decrease in the price of cattle for the entire market. “Another study from Iowa State University shows that meat packers are leveraging their market power across multiple plants, further eroding true price discovery in the cattle markets,” he said.

Don Schiefelbein, president of National Cattlemen’s Beef Association (NCBA) and owning partner of Schiefelbein Farms of Kimball, Minnesota, said the gross price disparities seen through the COVID-19 pandemic and the Holcomb fire of 2019 necessitated broader scope by investigative agencies. “That’s precisely why NCBA called upon the Department of Justice to investigate the four major packers. The results of this investigation have yet to be released. But I urge Congress to proceed carefully as we await the findings. I ask that you continue to encourage the attorney general as he continues this investigation and hold off on crafting new legislation until a determination has been made.”

Schiefelbein added that adding packer capacity through smaller and regionally based processing facilities, as has been encouraged under the Biden administration, as well as streamlining collaboration between the Packers and Stockyards Division and the Justice Department, are wiser courses to pursue in the current economic climate.

But NCBA does not support the Grassley-Fischer bill, Schiefelbein explained. “Freedom to market matters. It has allowed cattle producers like myself to respond directly to consumer needs. If the government were to erode this freedom or completely take it away, everyone suffers.”

Also testifying to the House committee were officials from the four largest beef packing companies – JBS, National, Tyson and Cargill – with only Tim Klein, CEO of National Beef, appearing in person and the others appearing remotely. 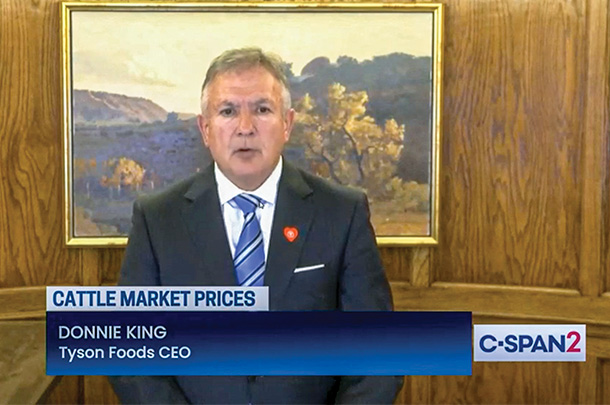 Tyson Foods CEO Donnie King was one of the four leaders of the largest packing companies to speak to the House Ag Committee. Courtesy photo.

Donnie King, CEO of Tyson Foods, said market disruptions created by COVID-19, the Holcomb fire, labor shortages, drought and additional export factors all played roles in the turbulent events seen in the past few years, with cattle being at the top of the cycle of high supply.

But House Ag Committee Chairman David Scott (D-Georgia) pressed all packer CEOs on why meat price margins have increased steadily since 2015 – before the pandemic or the Tyson fire supply chain disruption. Scott said, “Allegations were made against you that your four companies entered into an agreement to reduce supply and push profits up.”

With all four representatives of the packing companies under oath, Scott directly asked, “Was there ever any agreement between your four companies to cooperate together on issues impacting supply or pricing?” Three answered in the negative, with one answering, “Not that I am aware of.