How much ‘dirt’ is in your forages?

Minimizing soil content of forages should be the goal of every forage producer and dairy farm. This is because soil contamination of forages can add to the total ash or mineral content, which dilutes the energy and nutritive value of forages.

High iron levels in forages due to soil contamination can reduce the bioavailability of other minerals such as copper and perhaps manganese. In addition, soil can adulterate forages with spoilage and disease-causing microorganisms such as bacilli, clostridia and listeria.

These organisms can contribute to dry matter loss during silage fermentation and the production of undesirable end products such as butyrate, ammonia-nitrogen and biogenic amine compounds that can potentially have a negative effect on livestock health and performance.

Some of these soil-borne organisms can be disease-causing, such as Clostridia perfringens type A, which is associated with hemorrhagic bowel syndrome in cattle. Listeria monocytogenes can cause listeriosis in cattle, resulting in abortions, mastitis and other neurological symptoms.

Total ash content of forages has been commonly used as an indicator of soil contamination of forages. Alfalfa forages exceeding 12% total ash are often considered high in soil content. However, that is not always true. In some cases where an alfalfa forage ash content exceeds 12%, the reason for the high ash is not soil but just higher contents of assayed minerals such as calcium, phosphorus and potassium (as shown in Table 1). 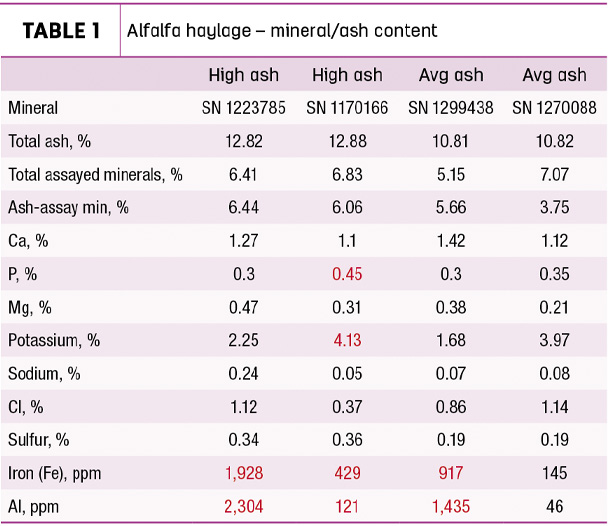 According to the U.S. Geological Survey published in 1984, the most abundant minerals in soil are:

As a result, these mineral elements are potential indicators and predictors of soil content in forages. However, iron can be potentially taken up from the soil by the forage plant if the soil pH is slightly acidic. Silica can be taken up, metabolized and assimilated into the cell wall fraction of most growing forages, especially grasses. Consequently, since both iron and silica content of forages can be due to both plant uptake and soil contamination, they may not be the best indicators of forage soil content either.

Aluminum in the soil is mainly found in the form of relatively insoluble aluminosilicates and aluminum oxides – and therefore are not likely taken up by the forage plant in significant quantities unless soil pH declines below 5.5. As a result, the aluminum content in a forage test should be mainly due to soil contamination. Therefore, in this article, aluminum content of forages will be used as the main indicator of forage soil contamination.

Soil can come in contact with forages at any stage of the growing, harvesting, storing and feeding phases. During the growing phase, soil can be “splashed” onto forage plants from excessive rain and in the extreme case of flooding. In dry windy conditions, dust can settle on the standing forage crop. Soil can be picked or stirred up by disc mowers set too low to the ground. Rakes and mergers that come in contact with the ground can also introduce soil onto the wilting forage. Dirt or mud tracked onto the cement pad of silage piles and bunkers while filling can get bladed into the wedge by packing tractors. Muddy conditions around bunkers and silo bags at feedout can increase the risk of loaders picking up mud or dirt when loading forages into the TMR mix.

Table 2 shows some extreme examples of soil contamination of alfalfa during the harvest process. In a field study conducted in northeast Wisconsin, multiple scissor clip samples were taken from standing alfalfa crops just prior to cutting by disc mower. 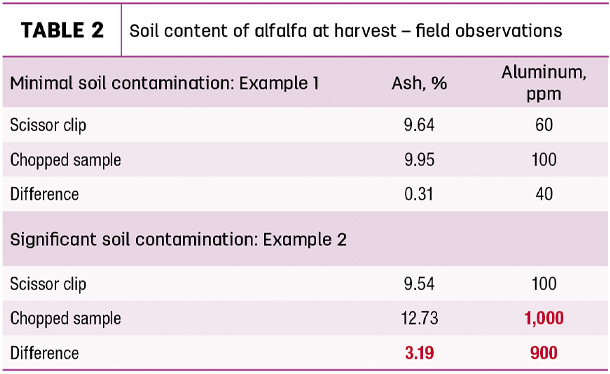 Then multiple chopped samples were obtained from the same fields at harvest to observe any increase in ash, mineral and predicted soil content during the cutting, merging and harvest process (see Table 2).

All fields were cut with a disc mower and wide swathed with no crimping. Then a large merger was used to combine swaths prior to chopping. In the vast majority of cases, there were minimal increases in ash, mineral and aluminum contents through the cutting and harvesting process (see Example 1, Table 2). However, in Example 2 of Table 2, there were a significant increase in ash, mineral and aluminum contents of the chopped sample compared to the scissor clip sample. Due to wet ground conditions during the growing season in Wisconsin, we can assume some soil was picked up during harvesting in this sample. Further testing is planned in the future.

What is the extent of soil contamination of alfalfa haylage?

The ash and mineral contents of alfalfa haylage were summarized from the lab analysis on over 20,000 samples analyzed in our laboratory (Analab; Table 3). 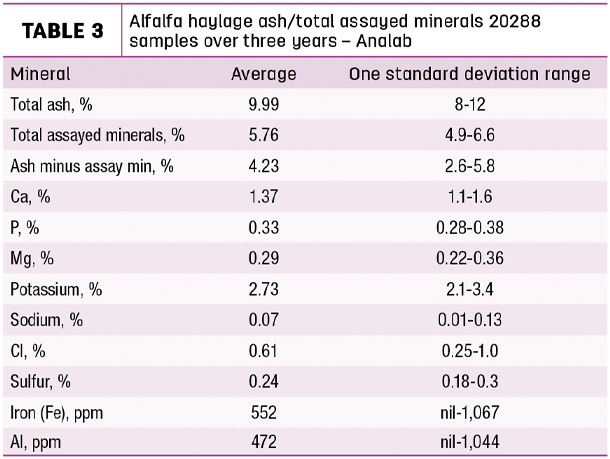 These samples came from all parts of the U.S.; however, most came from the Midwest and Northeast regions of the country. Table 3 shows the average and one standard deviation range of ash and the most commonly analyzed minerals in forages. The assayed minerals only account for about 50% to 60% of the ash content. Silicon or silicates likely comprises much of the non-assayed minerals in forages like alfalfa; however, this is difficult to know for sure, since silicon is not typically tested in forages.

So how much is too much aluminum in alfalfa and other forages? There is no definitive answer to that question; however, we consider 700 to 1,000 parts per million (ppm) aluminum as being marginally contaminated with soil and over 1,000 ppm aluminum as being significantly adulterated with soil. In the analysis of the 20,000-plus alfalfa haylage samples, over 80% of the samples were below the 700 ppm aluminum threshold; however, nearly 20% of samples were marginally or significantly adulterated with soil (see Figure 1). 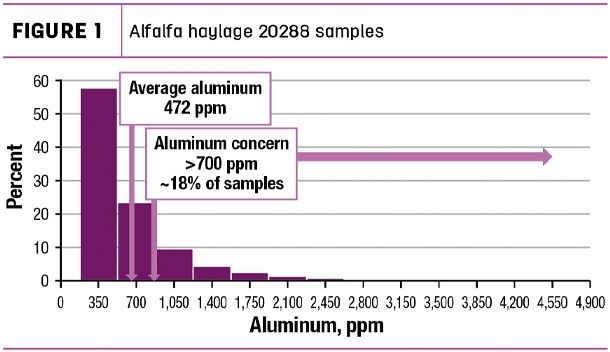 Consequently, most farms do a good job of minimizing soil contamination; however, there could still be room for improvement on some farms.

As mentioned previously, minimizing the soil content or contamination of forages should be the goal of every dairy and forage producer. This soil contamination can dilute the energy and nutritive value of forages, introduce potential iron mineral antagonism issues and adulterate forages with all sorts of spoilage and disease-causing microorganisms. These organisms can result in a higher risk for increased dry matter loss and spoilage during fermentation and feedout. In addition, soil contamination of forages can increase the risk of soil-borne pathogens such as clostridia and listeria.