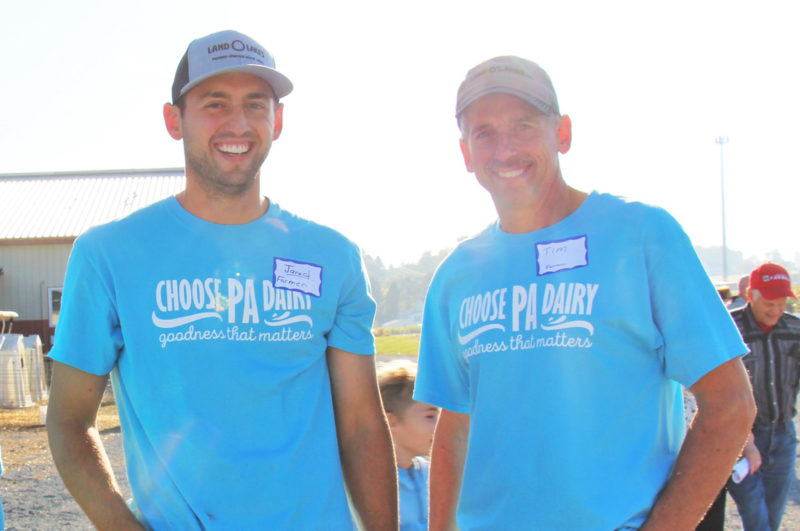 Through a Pennsylvania Center for Dairy Excellence transition team grant, Jared (left) and Tim Kurtz formed a team of advisers who helped them navigate the farm transition process. Courtesy photo.

Strong family relationships and outside advisers position Kurtland Farms for another generation.

For fourth-generation dairy producer Jared Kurtz, managing the income-generating capabilities of a dairy herd and farm are important for the future, but investing energy in family is foundational to building a dairy legacy.

“If I put all my energy into the farm and neglect my family, there's not going to be a family that wants to come back and be a part of it. The farm can be the most financially successful thing in the world, and they still might not want to come back,” Kurtz said.

Kurtz was featured in a recent Pennsylvania Center for Dairy Excellence (CDE) Cow-Side Conversations podcast. He shared the generational transition of Kurtland Farms, in southern Berks County, Pennsylvania. The five-year process started with a healthy family relationship and maintained a good balance between the family and the farm in achieving business goals.

After attending college, Kurtz worked for a software technology company while continuing to work mornings and weekends on the farm. He and his wife, Marla, made the decision to come back to Kurtland Farms full time in 2015.

“It was some of those nostalgic things, like the upbringing I had and the life I had growing up on the farm, that pulled me back here,” Kurtz said. “A lot of that was because of my parents and how they managed a family on the farm. It gave me that same desire.”

Kurtz's initial role was providing labor. With interest in transitioning to ownership during a period of tightening financial conditions in 2017, the family started discussing the farm’s future. That process started with critical communications between he and his wife and his parents, Tim and Deborah. Those initial conversations centered around a mutual core goal: Keep the farm in the family.

“We had to have some hard conversations,” Kurtz said. “We said, ‘If we’re going to do this, we’re going to have to make some changes to stay in the dairy industry.’”

In 2018, through a CDE transition team grant, they formed a team of advisers who helped them navigate the process with open minds. The team included a CDE transition consultant, Charlie Gardner, and their attorney, accountant, representatives from Penn State Extension and their bank.

“That initial team meeting really launched everything for the future,” Kurtz said. “Using that group of people to brainstorm ideas, ask some hard questions, look at opportunities to improve our cash flow and have conversations about restructuring things [is] really what has allowed us to get to where we are today. Our goal was to continue dairying, but we were really open to however things would shake out and what that plan looked like.”

With a clearer picture of what was ahead, they began implementing changes over the next three years to ensure their family farm had a sustainable future. It took another 18-24 months of working closely with their consultants to finalize the transition plan. “It involved a lot of side conversations and emails that happened throughout the process,” Kurtz said.

Kurtz credits his father’s encouragement, openness and willingness to share responsibilities and decisions as vital pieces of the transition. Having third parties help navigate the hardest conversations made the transition smoother – and quicker – than they anticipated.

“Letting someone else step in isn’t always easy, but my dad has been extremely gracious,” Kurtz said. “He hasn’t held onto anything too tightly or expressed frustration. If anything, he’s always tried to encourage me to do more. He’s given me a lot of liberty with decisions. As a result, we’ve made a lot of the decisions alongside of each other.

“There were times that felt uncomfortable and we didn’t want to do it, but we really had to force ourselves to [have hard conversations],” he said. “It’s not healthy to suppress your own concerns. It needs to be done in a gentle and gracious way.”

Even before the transition process, Kurtland Farms had already made one transition, installing robotic milking technology in 2013. An automatic feed pusher keeps feed in front of the cows.

Today, with just over 300 milking cows and approximately 300 replacement heifers, they milk in two different facilities: an original 70-tiestall facility and the four-box robotic freestall barn. All cows freshen in the freestall barn and remain in that milking herd through breeding and peak lactation. Lower producers and those with teat placement issues eventually move to the tiestall barn. That helps build toward a goal of achieving 6,000 pounds of milk per robot per day.

“The robots are extremely beneficial. They save us a lot of time, and they really help with our reproductive program. The robots are an essential part of our operation every single day,” he said.

“There was definitely a learning curve for us adjusting our management and expectations of the robots. You can’t just put robots in and then walk away,” Kurtz said. “It’s less physical labor, but if there’s a sick cow, you still need to treat her – the robots won’t fix that. You still need to have a high level of management in the barn with the cows.”

They also adjusted the farm’s nutrition program to become more efficient on the feed side, analyzing cropping strategies to cut down input costs, and they worked to lower their cost of production.

They farm about 260 acres, filling most of their forage needs by double-cropping corn silage with rye and triticale. With an overall goal of maintaining a 30,000-pound herd average and 7 pounds of components, attention to forage and feed quality is critical.

“How we achieve those bigger goals happens on the day-to-day basis,” Kurtz said. “If you can’t do some of those daily responsibilities right, you can’t manage any of those bigger goals. We try to make sure our feed mixing is done correctly; our crops are harvested at the right time with the correct nutrient value. We utilize our manure in the most effective way, and we get all we can out of the land we farm."

Now that the transition planning process is complete, a lot of the operation’s management responsibilities, including managing full- and part-time employees, have shifted.

“I was involved on the financial side, but I wasn’t the one paying the bills. We kind of view these first 12 months as us working alongside of each other to make sure things like that don’t fall through the cracks,” Kurtz said. “My dad is working with me, and I’m listening to him on how he has done things with our vendors. I’m trying to maintain the relationships my dad has created.”

With urban encroachment and land availability being limiting factors for expansion, newer goals are to eventually diversify and find new opportunities for revenue streams for the farm over the next five years.

With a successful transition, Kurtland Farms is in position to extend its family legacy. 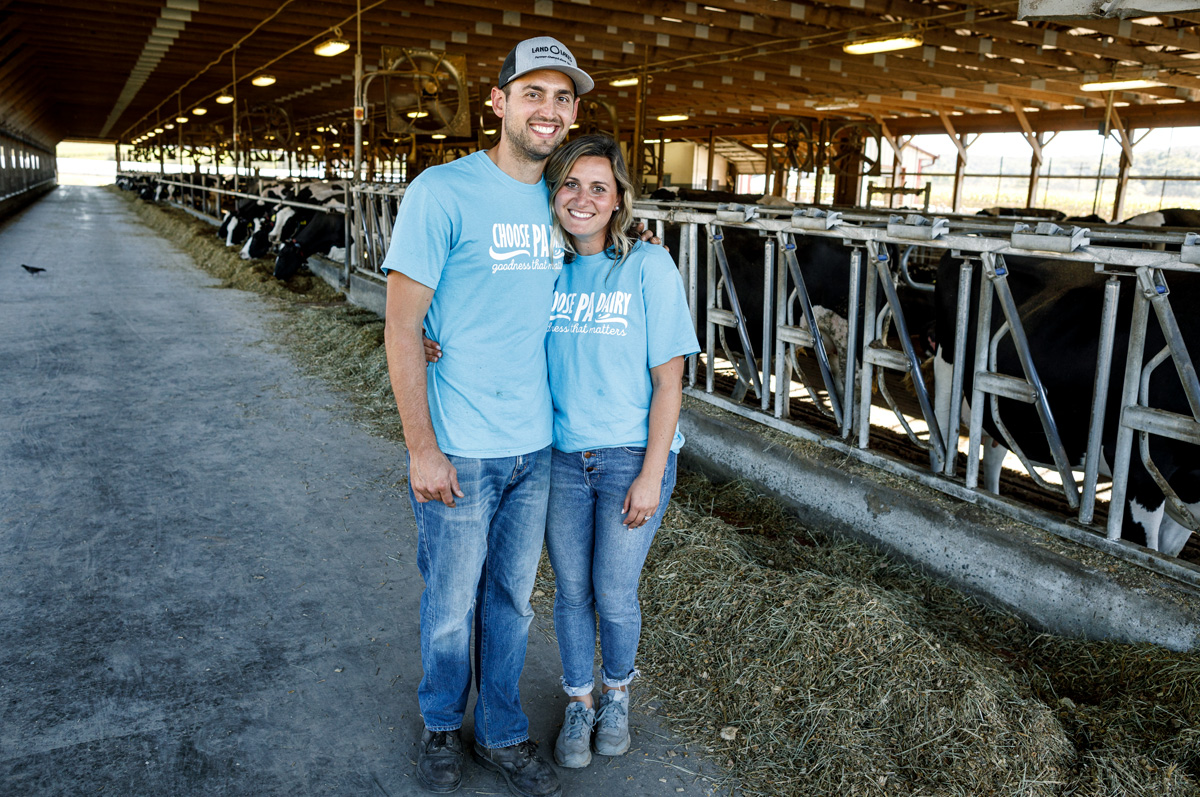 After attending college, Jared Kurtz worked for a software technology company while continuing to work mornings and weekends on the farm. He and his wife, Marla, made the decision to come back to Kurtland Farms full time in 2015. Courtesy photo.

“There are some days throughout the year where there are four generations working on the farm. That’s a unique opportunity that not many people get nowadays,” Kurtz said. “You can’t put a financial number on being able to do something like that. I know it inspires all of us to keep working. My kids know a lot about their heritage, and I feel that, too.”

Visit the CDE website to listen to the full podcast interview, including other feeding, cropping, manure and risk management practices at Kurtland Farms.

Emily Barge is the communications and marketing manager with Pennsylvania’s Center for Dairy Excellence.