Hydroponic forages are developing a presence in the U.S. and have the potential to become a good source of high-quality feed for cattle.

Hydroponic forages, or forages grown using a specially formulated combination of water and light – no soil required – are not a new technology. Increased pressures to find sources of quality feed through several years of persistent drought, along with the appeal of a land- and water-efficient, environmentally friendly source of high-quality forages, has spurred a growing interest in using hydroponic forages in the U.S.

Travis Mulliniks, range beef nutritionist with the University of Nebraska – Lincoln extension, says these fodder systems are not necessarily a new thing, and have primarily been utilized more in Europe in the small ruminant sector for smaller herd sizes, but they are an interesting concept for a growing number of curious U.S. producers.

Recently, as part of the September meeting of the western section of the American Society of Animal Science in Park City, Utah, Mulliniks had the chance to tour some local operations, one of which is a dairy that is working with a Utah-based company, Renaissance Ag, to implement one of their fully automated and self-contained hydroponic forage systems to include sprouted barley into their dairy ration. Mulliniks has also worked with a producer who is using his own hydroponic system to feed out three to five yearling steers. 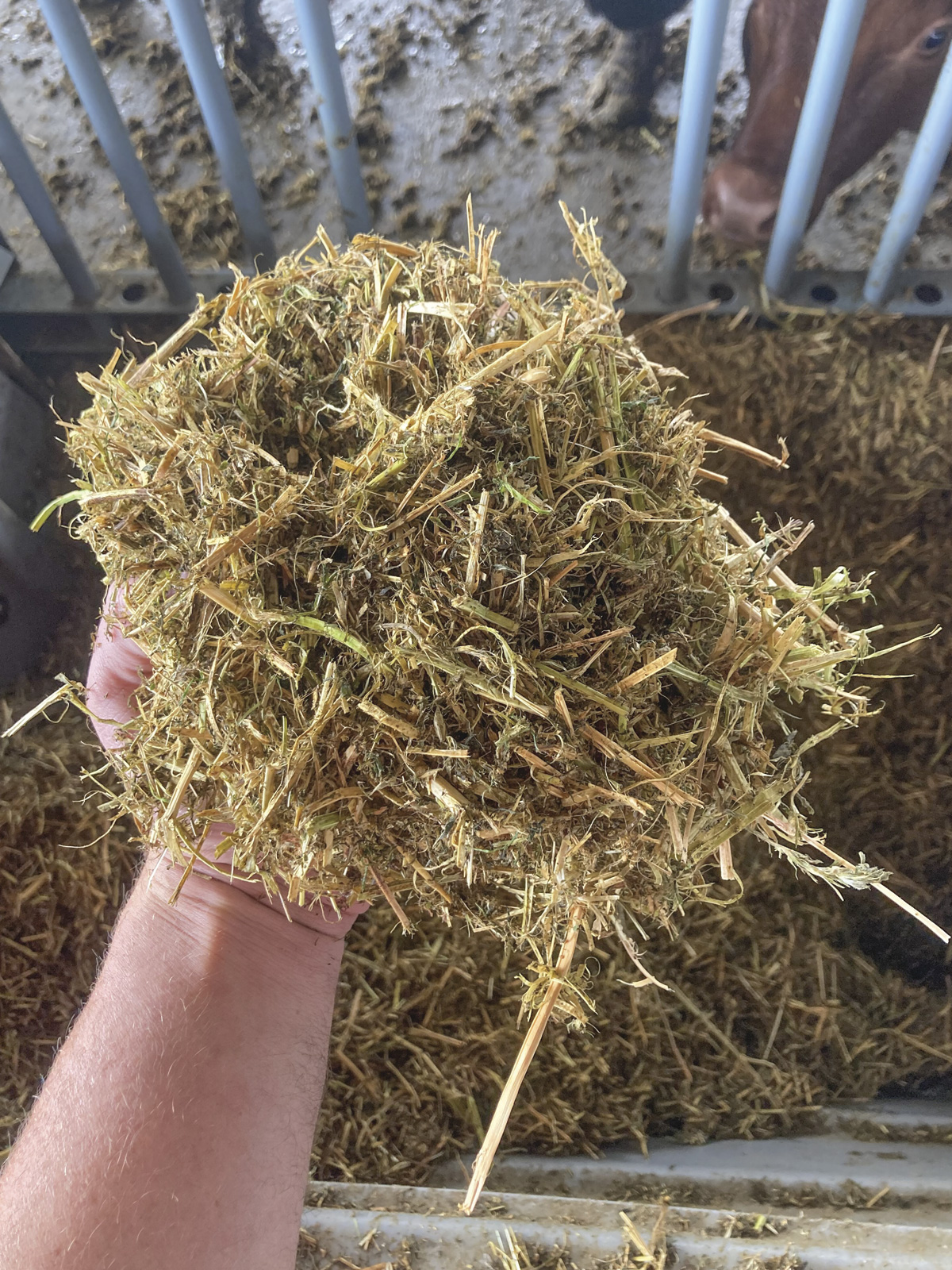 The 50-50 blend of low-quality alfalfa and sprouted barley are used in the feeding trial at Utah State University. Photo courtesy of Renaissance Ag.

Hydroponic forages have not been developed far enough yet to be a primary feed source for a herd of cattle. “We still have work to do there,” says Brady Blackett, head of strategic partnerships at Renaissance Ag. “But for those producers who have limited access to quality winter forage, sprouted fodder is an ideal source. It will blend really well with low-quality alfalfa, grass, straw or cornstalks.”

Hydroponic forages, which usually include sprouted wheat or barley seed, are, according to Mulliniks, generally high quality and are comparable to high-quality alfalfa hay. A misleading factor, when it comes to understanding hydroponic forage quality and translating it to feed value, is water content. “Those forages generally run somewhere around 85 percent water content, so about 15 percent of that is dry matter and nutrients,” Mulliniks says. “And when doing rations with producers, they don't always think about, when you have that much water, how much it takes to actually feed an animal.”

Water content is a commonly misunderstood concept when figuring out rations. “Anytime a nutritionist does something from a ration basis, we always put it in a dry matter basis to keep the ratio 1-to-1, everything equal,” he says. “The reason behind that is: If you think about a dry feed, let's say dried distillers, that is 88 to 89 percent dry matter, you can't compare it with wet distillers that is 35 percent dry matter. It can be the same nutrient profile, but you can’t compare them on a wet basis.

“When formulating rations with producers, even with corn silage that may be 65 percent moisture and 35 percent dry matter, you're feeding 70 pounds per day on an as-fed basis. That’s a lot, and that blows their mind because it's all water. That's the challenge with these [hydroponic forages] is that you're feeding a whole lot of water, so understanding that is important.” 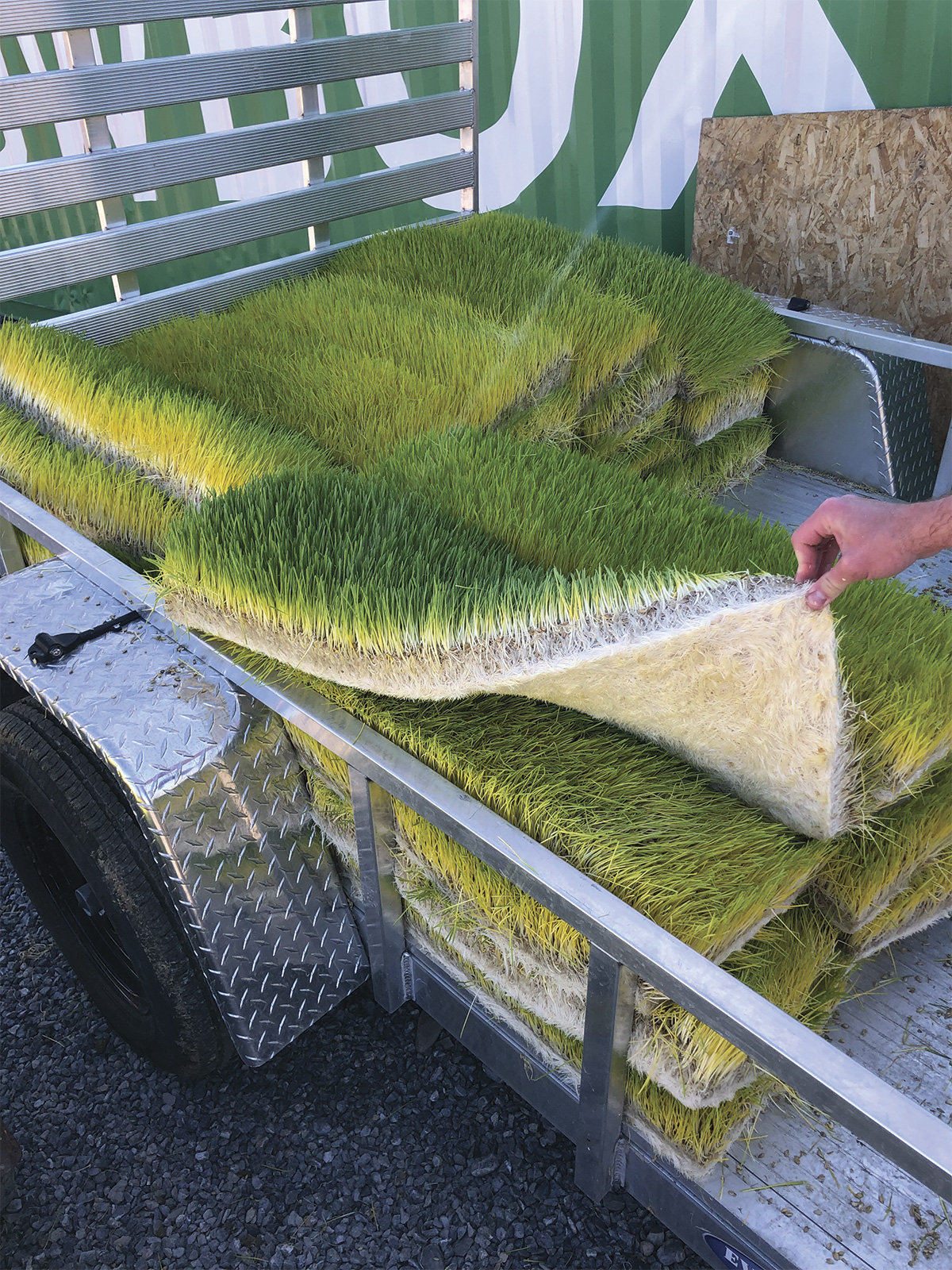 Sprouted forages wait to be mixed into a feed ration. Photo courtesy of Renaissance Ag.

While hydroponic forages are still in the fledgling stages of establishing themselves in the U.S. ag sector, some research is being done to help flesh out their role in beef and dairy diets.

Renaissance Ag is working with Utah State University on three feed trials in beef cattle. “Currently, we have two feed trials being conducted,” Blackett says. “We are feeding cow-calf pairs on an as-fed basis to understand the proper inclusion rate and to learn more about how efficient this feed truly is in feeding lactating and gestating beef cattle. We have a lot of anecdotal data that suggest there will be some great benefits to including sprouted barley or wheat grass into this class of cattle along with some economic benefits to help drive more profitability back to the farm or ranch gate.” They are nearly two-thirds of the way through the cow-calf trial and will be publishing the results, which producers will be able to access.

The second feed trial will involve backgrounding steers with a 20%, 40% and 60% inclusion rate of sprouted wheat or barley feed. “We are excited about this trial because our modeling efforts indicate that we could have an impact on cost per pound of gain.” The third trial will focus on the finishing stage, where steers will be fed three different inclusions rates of sprouted feed. “Again, we believe there will be an impact from an economic perspective as well as an impact on both the quality and yield grade of the beef. We are anxious to track the cattle through each of the final two trials.”

The company is also working with Cornell University on a dairy trial to determine the best inclusion rate in a lactating Holstein cow diet. 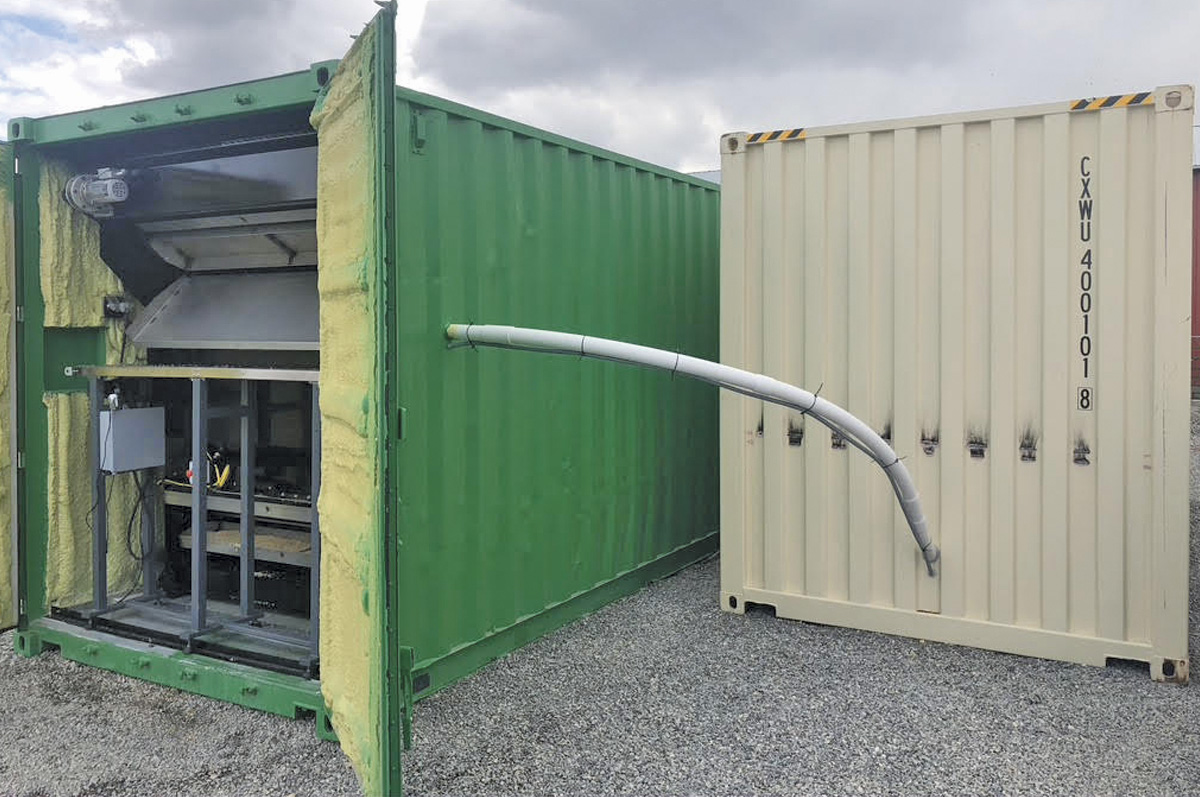 The biggest make-or-break factor for hydroponic forage systems, according to Mulliniks, is the price point. “Producers are looking at opportunities to cheapen their production costs. The concept of 'I can potentially grow my own feedstock or hay in a shed and provide a high-quality product year-round' is interesting because it could give you more flexibility since you’d have a year-round product that you can grow yourself and feed that's high quality. But the price point still has to be there.”

According to Blackett, on an as-fed basis, the cost for hydroponic forages is $126 per ton. On a dry matter basis, the recommended metric from Mulliniks, the cost is around $550 per ton. “While this may raise eyebrows on a dry matter basis, we do believe, based on what we know, that cattle will be much more efficient on sprouted barley or wheat grass when compared to feeding them alfalfa hay. Therefore, while the cost per unit of dry matter is more, there will be some efficiency tradeoffs that will benefit producers,” says Blackett. "From a feed comparison perspective, sprouted barley or wheat grass will range anywhere from 15 percent to 19 percent in protein. It's a safer feed as well because during the sprouting process, the starch in the seed is converted to rumen-efficient sugars that are an awesome source of energy for cattle.”

“This is where it gets hard – the cost,” says Mulliniks. “If it's comparable quality wise to alfalfa on a dry matter basis, 1-to-1, I can get high-quality alfalfa in my region for less than 150 dollars per ton. So that's the challenge, right? It's a cool concept, but the price point is extremely high. That's the concern – I can't pencil that out compared to high-quality alfalfa.” 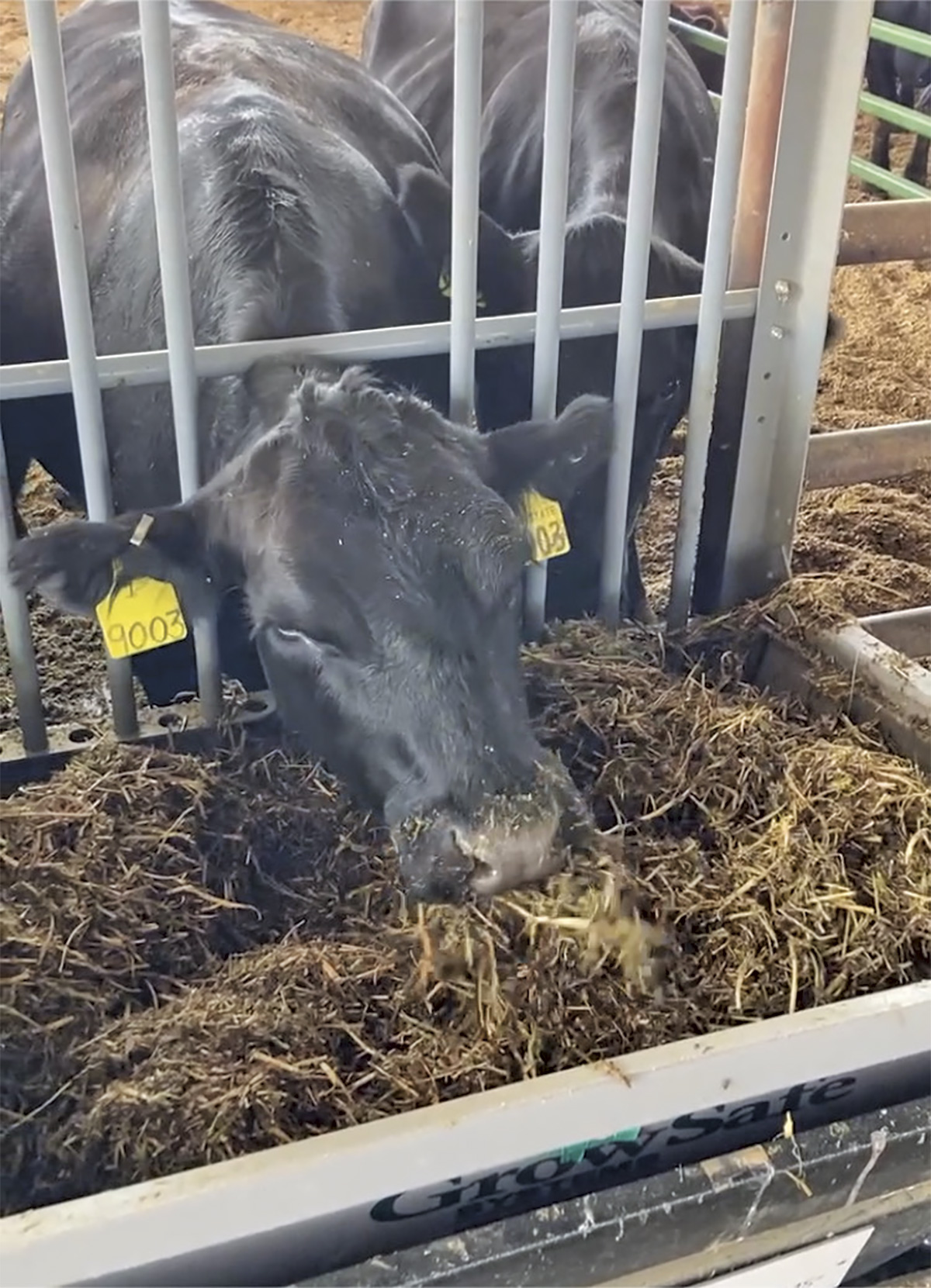 One of the cows in the feed trial at Utah State enjoys her share of the 50-50 mixed ration. Photo courtesy of Renaissance Ag.

No forage system is perfect. Although hydroponic forages may not have weeds, frost or other environmental pressures to contend with, the system is not without its challenges. Mold is the most common problem producers face with hydroponic forage systems. “Producers in the past have struggled to control mold in the feed,” says Blackett. “Most grains or forages harvested by conventional means have mold present – just look at most silage pit faces or a stack of hay that has been left uncovered, but mold is the biggest drawback producers have. We are continuing to understand the science of mold and how to manage its growth. So far, we have been highly successful in controlling this through proper environmental controls, appropriate watering cycles and being vigilant in how a system is cleaned before it's reseeded.”

“It's a really cool, interesting concept, and there are some challenges with anything new like that,” says Mulliniks. “Anytime something new comes out, price points are usually high until there's enough competition. That may change in the next 10 or 15 years when these are less unique and at a different price point.”

“The drawback is that our systems are new and unproven,” Blackett says. “But as you step back and realize we have a growing global population to feed on a decreasing amount of land in crop production, one can see the potential and value in controlled environment ag systems.”