Dietary management of subclinical hypocalcemia with zeolite A

Researchers at Cornell have identified another dietary tool that nutritionists and dairy producers can use to prevent hypocalcemia.

Feeding zeolite A improved calcium status around the time of calving and may have improved reproductive performance, although further study with larger numbers of cows is required to evaluate effects on reproduction and health more fully.

Calcium requirements around calving increases at least two-fold, primarily due to colostrum production. To meet these demands, the dairy cow can mobilize calcium from bone, increase calcium absorption through the intestine and decrease calcium excretion through urine. Activation of this process can take days and is in response to a series of hormonal pathways, triggered by a drop in blood calcium concentration.

If a cow fails to adapt to the calcium demands, she is at risk to develop hypocalcemia after parturition, which is subsequently associated with an increased risk of impaired health, decreased milk production and decreased reproductive performance.

Cows that have subclinical hypocalcemia (SCH) continuously from calving through three days in milk (DIM) can be classified as having chronic SCH, which increases disease frequency and time to pregnancy. Although clinical hypocalcemia affects less than five percent of cows, recent studies show that approximately half of cows suffer from SCH following parturition.

Prevention of hypocalcemia is dependent upon pre-calving nutritional management. Decreasing the dietary cation-anion difference (DCAD) through use of low potassium forage and dietary supplementation with sources of anions (Chloride and Sulfur) is a time-tested approach supported by research and field experience. The best results with anion supplementation occur in conjunction with routine monitoring of urine pH and use of commercial anionic supplements designed for improved palatability.

The other approach is to feed a low calcium diet pre-calving. However, it is difficult to feed a ration low enough in calcium using typical feeds to trigger the calcium regulatory system. As an alternative, research conducted in Europe, beginning nearly 20 years ago, suggests that a low calcium dietary approach can be actualized by supplementing the prepartum diet with a synthetic zeolite A, which binds dietary calcium and decreases its absorption.

In a recent study at Cornell University, a synthetic zeolite A (X-Zelit, Protekta Inc., Lucknow, Ontario, CA/Vilofoss, Graasten, DK) was fed to prepartum multiparous cows (n=26) for three weeks prior to expected calving and tested against a control group (n=29). 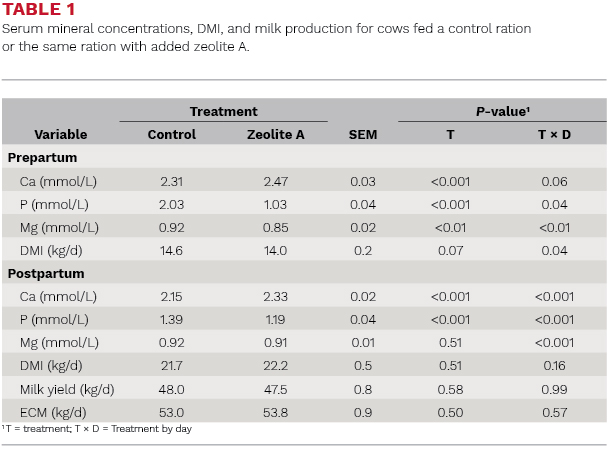 Decreased serum phosphorus and magnesium concentrations are likely due to the binding effect of zeolite, making these minerals less available for absorption. Having elevated blood phosphorus concentrations can inhibit the effectiveness of calcium absorption in the intestine and, therefore, it is plausible that the decrease in prepartum serum phosphorus, as seen in zeolite-fed cows, is a mechanism to improve calcium status. Although magnesium concentration was reduced in zeolite-fed cows, it was still within the normal range of 0.75 to 1.0 mmol/L.

The prevalence of SCH between the two treatment groups is shown in Figure 1. 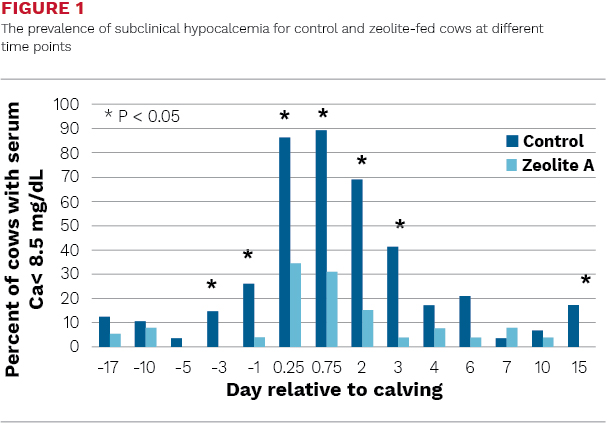 Cows fed the control diet had a significantly higher SCH prevalence from three days prior to calving through three DIM, with approximately 90 percent of cows having SCH within the first DIM, compared to approximately 35 percent of zeolite-fed cows.

Only one out of 29 control cows was not diagnosed with SCH (Ca < 8.5 mg/dL) from calving through three DIM, whereas 50 percent of the zeolite-fed cows were not diagnosed with SCH. Cows with serum calcium concentrations below 8.5 mg/dL from calving through three DIM were considered to have chronic SCH. Feeding zeolite to cows eliminated chronic SCH whereas 34 percent of the control cows were considered chronic.

We observed a tendency for zeolite-fed cows to become pregnant sooner than the control cows. Median time to pregnancy for zeolite-fed cows was 70 days versus 89 days for control cows. We observed no other treatment effects related to production outcomes or postpartum dry matter intake (DMI), however, cows fed zeolite tended to decrease DMI as parturition approached (Table 1).