Thomas Kilcer
In today’s tight dairy economy, every acre, just like every cow, needs to be profitable. Adding red clover in a tight economical rotation, teamed with winter forage, can do that.
Thomas Kilcer

Red clover has been a marginal crop, grown on marginal acres, with marginal management, only after the real crops are in. Farmers are missing a huge opportunity with neglect of this forage. The dairy industry is shifting to higher digestibility forages that support high-forage diets. Shorter high-yield rotations that integrate sequential year-round cropping with winter forage have all increased interest in utilizing red clover. Recently, New York Farm Viability supported research that significantly contributed to moving red clover to the forefront of farmer crop/feeding plans. Thousands of acres across the northeast/northcentral do not support alfalfa.

By applying red clover minimum/no-tilled in a short rotation with no-till corn and winter forage, very high economical yields of quality forage can now be achieved on soils that traditionally had not produced a reliable feed supply. Utilizing a modified wide (greater than 80 percent) swath same-day haylage, farmers can produce the same or better forage on poorer drained soils, as is produced by alfalfa on well-drained soils.

Red clover yields are equal to or exceed alfalfa for the first two to three years. Only in long rotations will alfalfa out-yield clover. Our replicated research was the first cut of the second year for both alfalfa and clover. Clover was a clear winner by a huge amount. The mean for all paired sites was 44 percent higher yielding clover than alfalfa in that one cut. Alfalfa was 2.7 tons dry matter/acre in first cut while the clover was 3.9 tons of dry matter/acre for the first cut. This is backed by multiple year results in the Cornell Plant Breeding legume trials where clover out-yields alfalfa the second year.

A major concern is that clover needs to be reseeded more often. First, with an intensive cutting schedule many alfalfa varieties are not maintaining economical stands very long. Second, older clover or cheap varieties do not support longer stands. With new genetics we have had red clover last well through the third year and, depending on the variety, sometimes into the fourth. A key factor missing in shorter-lived stands is inadequate liming and lack of topdressing. It is a legume like alfalfa, and needs to be fertilized, not forgotten. In a number of areas, insects such as the clover root weevil and the sitona weevil limit the productive years of red clover. Using the technique pioneered by Advanced Ag Systems of no tilling the legume into winter forage stubble in early June after haylage harvest is completed means that both of those insects will have already laid their eggs elsewhere so clover gets a year free of pressure. Thus, it delays the yield-robbing insect buildup.

The sleeper has been the phenomenal quality red clover produces. The majority of the components of legumes are rumen digested in the first 12 hours. In recent research funded by New York Farm Viability Institute, for each of the test locations clover was significantly higher in digestibility than alfalfa in that period. It also had significantly lower uNDFd 240 - the undigested portion. In short, the cow got more out of clover than alfalfa at the same NDF. On nearly all harvest dates, clover had equal to or more metabolizable protein than alfalfa. Enhancing that, from a nutritional standpoint, red clover has enzymes that inhibit protein breakdown.

Bypass protein is incredibly expensive even though it is added in small amounts, so using red clover can produce more milk at a lower cost. This is a direct savings on the ration and is critical for organic farms that do not have the range of byproducts to supply needed bypass protein. Dr. Flythe of the Agriculture Research Service found clover also contains a compound that inhibits hyper-ammonia rumen bacteria from destroying protein, thus increasing the metabolizable energy for milk production. Maximizing use of clover protein and energy reduces off-farm purchased protein, which reduces importation of phosphorus onto the farm, and so aids in more nutrient balanced farms.

Red clover can have higher NDFd over regular alfalfa at 40 NDF harvest stage. This increase can be as much as the gain over regular alfalfa from using the new highly digestible alfalfas, yet it grows on wetter soils. The surprise was that in our research clover was at peak quality at the same time or up to a week earlier than the alfalfa in the sites paired with alfalfa in replicated plots. Using the old traditions of cutting it after alfalfa, especially in stands with grass, you are double handicapping (late clover, even later grass) the ability of the crop to produce equivalent milk to timely cut alfalfa.

In our research we found another major imposed handicap to clover yield is compacted plow pans limiting root growth. Most clover is grown on less-than-ideal drained soil types. At some time in the past the ground was plowed when the 4- to 8-inch layer was wetter than optimum. This leaves a smeared pan that lasts for years. (Freezing does not remove it.) We found in a silty clay soil that we could clearly see the compacted marks of the mole board plow when it was plowed for hay seeding 15 years before. There were no roots below the 7-inch limiting pan. This severely limits clover crop yield and longevity. In another study we deep-tilled a compacted sand on 30-inch center in corn, followed by a clover crop. When a drought struck, the clover grew a foot-wide strip on 30-inch centers and died in between the centers. Crops can’t produce without roots, and most places where clover is planted are severely root limited. Correcting this by deep tilling before winter forage can release the full potential of the clover crop on your soils.

Work in Wisconsin found that cutting the first and second crop at 20 percent bloom (seeding year cut before bloom) and then taking a late harvest after a killing frost, maximized the yield and the stand. While maintaining high digestibility, this significantly reduces the cost per ton compared to alfalfa harvested five to seven times in an attempt to get quality. The 20 percent bloom for first cut matched very well with our measurements of when it reached 40 NDF for harvest. At two of the three sites, cutting at first flower had significantly higher NDFd30 than alfalfa. Harvest height also was a good predictor of peak quality with the mean of 33 inches. This is nearly the same as alfalfa reaching peak quality. Because these were straight clover stands, by the time 40 NDF was reached, the clover was starting to lodge. If planted with grass it would help to hold it up, but it would have to be harvested before straight alfalfa to match the grasses earlier maturity.

The biggest criticism with red clover – its perceived difficulty to dry – is a non-issue. Another NY Farm Viability Institute funded and replicated research project by Advanced Ag Systems LLC, with assistance from Cornell Cooperative Extension educators and area farmers, clearly showed with heavy yields, and under very adverse drying conditions, that we could get red clover to greater than 35 percent dry matter the day it was mowed with a modified wide swath haylage system. It is critical for the swath to be greater than 80 percent of cutter bar for same-day haylage to be consistently successful. When the mower’s deflector was lowered to make a wide swath, the clover impinged into a lump on the deflector, and then dropped to the ground. Removing all deflector shields dramatically decreased swath density and increased photosynthetic drying. Conditioning had no effect on reducing the time for drying wide swath clover for haylage.

Finally, the heavy yield, like that of winter forage, physically prevents the lower layers from drying. Recognizing these mechanical hindrances to drying, and the heavy yield of first-cut clover’s impact on drying, adding a tedding two hours after mowing will correct these limitations. Proper tedding (fast-forward speed makes nondrying lumps) lifts and loosens the swath, spreading it to 100 percent plus of cutter bar width. More importantly, it brings the lower layers of material to the surface, and to critical sunlight for rapid photosynthesis drying. This drying for haylage uses moisture in the leaves exposed to sun and pulls moisture from the stem. Thus, the stem dries first and the leaves last. Because of this, the leaves are very flexible and not easily lost in correctly timed tedding. 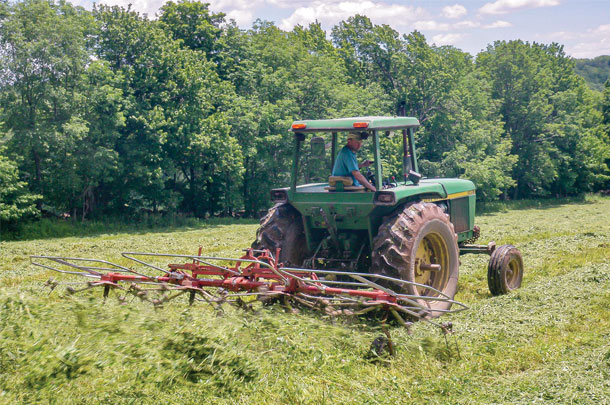 In all of the studies on first-cutting red clover in wet weather, the narrow swaths were not ready to ensile (>30 percent dry matter) until 24 to 30 hours after mowing. In five of the six studies, the wide swath not tedded was ready to ensile in just over seven hours. (Due to the mowers available then, these swath widths were not greater than 80 percent of cutterbar width, and thus required more extended drying.) In all of these tests, wide-swath red clover with tedding two hours after mowing was ready to ensile in just over five hours (same-day haylage). Another result of our research showed that on first-cut red clover in more normal weather and unconditioned swath at 90 percent of cutterbar, the tedded treatment only required four hours to reach ensiling dry matter – the same as the paired alfalfa. Second-cutting red clover, especially laid at greater than 80 percent of cutterbar, may not need to be tedded at all depending on yield.

PHOTO 1: Red clover harvested on time can have NDFd30 digestibilities as good as those from highly digestible alfalfa but will grow on wetter soils.

PHOTO 2: Wide-swath greater than 80 percent of cutter bar, coupled with tedding 2 hours after mowing, allowed us to make haylage in a day from heavy first-cutting clover in the second year of stand.

Alta Seeds is the premium seed brand of Advanta Seeds US, an operating unit of global seed company Advanta Seeds. Our carefully developed, high-performing hybrids are designed to meet your individual challenges.