The importance of fat-soluble vitamins

Louisa Koch
It requires more than just energy to achieve peak performance and overall health of your milking herd. Vitamins are organic compounds required in small quantities and essential for the maintenance of life.
Louisa Koch

Rising feed costs and lower profit margins may motivate some producers to limit vitamin and trace mineral inclusion. However, supplementation of adequate vitamin levels in the diet is pivotal to the maintenance of a healthy and productive animal.

Vitamins A, E, D and K are fat-soluble vitamins necessary for many functions within the animal. Vitamins A and E have specific dietary requirements, whereas vitamin K can be synthesized in the rumen, and vitamin D can be synthesized by the skin when exposed to adequate sunlight. Requirements for vitamins are given as international units (IU). Depending on the management system, vitamin supply may be limited due to variables such as decreased exposure to sunlight or access to quality forage, and therefore additional vitamin supplementation is necessary.

Vitamin A activity can be provided to ruminants in the form of provitamin A precursors known as the carotenoids (i.e., beta-carotene) and in preformed vitamin A supplements. Forages contain substantial quantities of beta-carotene that can be converted into vitamin A, but the concentration decreases as forages mature and are reduced significantly with ensiling. Cereal grains are considered poor sources of vitamin A. Destruction of vitamin A within the rumen can be extensive as well, thus contributing to the need for higher dietary vitamin A levels.

Vitamin A plays important roles in a wide variety of functions including vision, fetal growth, immune function, reproduction, mucosal barrier integrity and gene regulation, just to name a few. The essentiality of vitamin A for normal processes within the body creates immense assortment of deficiency symptoms. Some common signs of deficiency include blindness, roughness of the skin or hair coat, abortions and retained placentas, and poor reproduction.

According to the 2001 NRC, a dairy cow requires a vitamin A supply of approximately 50 IU per pound of bodyweight daily. For a 1,400-pound animal, this translates to 70,000 IU of vitamin A. Dry cow recommendations for vitamin A are the same as for milk cows, mainly due to research that showed improved milk production after vitamin A supplementation during the dry period.

Vitamin D is considered a pro-hormone, as it is a precursor for the production of the calcium regulating hormone 1,25-dihydroxyvitamin D. Vitamin D can be produced through exposure of the skin to sunlight. The general functions of vitamin D are to elevate plasma Ca and P levels that promote normal bone mineralization and Ca status.

Typically, animals with extreme cases of vitamin D deficiency can be characterized by soft, poorly developed bones, as normal calcification cannot occur in the absence of adequate Ca and P. Although vitamin D is most notably associated with its relationship to Ca and P, it is involved in other processes such as mammary development, reproduction and immune responses.

Lactating dairy cows have a requirement of 21,000 IU of vitamin D3 per day, according to the 2001 NRC. It was previously believed that dairy and beef animals do not require additional vitamin D supplementation if exposed to enough sunlight. Movement toward more indoor confinement-based systems and feeding stored feeds and byproducts have suggested vitamin D may need to be supplemented within the diet for optimum performance.

Vitamin E is a generalized term for compounds called tocopherols and tocotrienols. The most common form of vitamin E found within feed is α-tocopherol. Fresh forages contain high levels of vitamin E, but this concentration decreases quickly after cutting and subsequent exposure to sunlight.

Vitamin E is most notably known for its role as an antioxidant, but it also is an integral part in many other processes such as immune and reproductive function, as well as the maintenance of cellular membranes. Deficiencies of vitamin E can occur, although they are sometimes difficult to ascertain due to vitamin E’s relationship with selenium. There are a wide variety of pathological conditions connected to a vitamin E deficiency, including anemia, retained fetal membranes, liver necrosis and skeletal and cardiac muscle degeneration.

Vitamin levels in feeds can differ greatly depending on factors such as plant genetics, weather, fertilization and plant disease. For example, corn that has gone through periods of freezing and thawing may have lower levels of vitamins A and E. Some components of feed handling can alter vitamin levels, such as pressure from pelleting, light and trace minerals. Although several factors are known to influence the requirements of these vitamins (Figure 1), the amount of supplemental vitamin A, D or E may be enhanced in some situations. 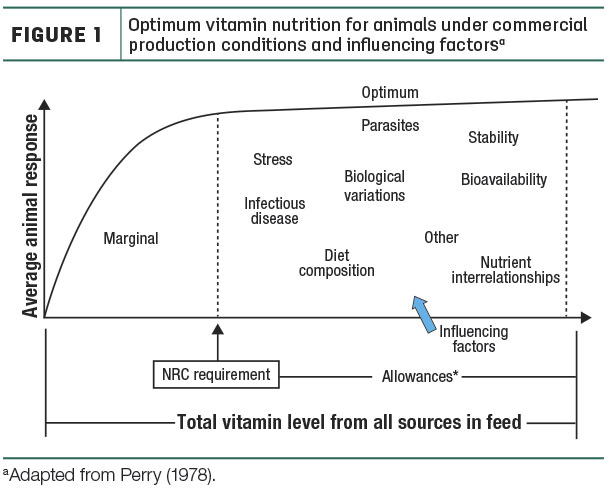 Other factors such as mycotoxins can impair the absorption of vitamins A and E. High levels of certain heavy metals can increase vitamin requirements, as can other vitamin antagonists within the diet. Age, milk production level, health status, immune status, physiological status (pregnant, lactating, etc.) all contribute to an animal’s vitamin requirement and utilization. Talk with your nutritionist today about where your herd stands with their vitamin program.