However, there is increasing concern about the resistance of cattle parasites (anthelmintic resistance) to dewormers. Parasite presence is economically costly at much lower levels than previously thought.

Parasites in the absence of disease may cost the producer a large amount of money in lost weight gains and reduced feed conversion. Young animals like stockers and growers are more susceptible to parasite infection. Sick cattle or cattle in poor body condition are more prone to be infected with parasites.

Cattle may be infected with liver flukes, tapeworms or roundworms. Economic losses due to parasitic infections of livestock have been estimated at more than $2 billion annually in the U.S. These internal parasites can be controlled with proper management strategies, which should include a pre-planned deworming schedule. 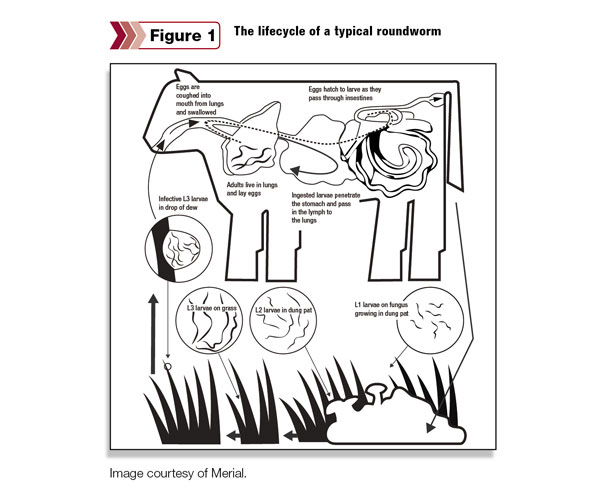 The roundworm burden for many cattle is great enough to make deworming an economic benefit. Increased gains of up to 60 pounds per animal in a grazing season have been reported in some areas of the U.S.

A basic understanding of the life cycle of parasites can assist producers in making good management decisions when stocking young cattle on their operation.

The life cycle of all parasites involves both immature and mature stages. The animal harboring sexually mature parasites is called the principal host. Immature stages of some parasites must partially develop inside an animal of another species, such as an insect, a snail or another mammal.

These animals are called intermediate hosts. After such development, the immature parasite forms are infective for the principal host.

The fluke’s life cycle requires two hosts: cattle and snails. Adult flukes are found in the bile ducts of cattle. Eggs are laid in the ducts and expelled with the feces. A larval stage hatches from the egg and infects the snail, where it reproduces asexually.

Specific stages of the juvenile fluke leave the snail and encyst on aquatic vegetation. Cattle eat the vegetation and become infected. The fluke migrates to the liver, infects the bile duct and matures into an adult.

Adult tapeworms have hooks, spiny structures or suckers on their heads, which allow them to attach to the wall of the intestine. The rest of the tapeworm is made up of a chain of flat segments.

The adult tapeworm consists of a head where the worm attaches itself to the mucosa of the intestine, a neck and a segmented body that contains both male gonads and female gonads.

Mature tapeworms shed segments, which are expelled with the feces. These segments are packed with eggs. The eggs are deposited on forage vegetation, which are eaten by cattle.

The segments enter the digestive tract of its intermediate host. The enzymes and the acids found in the gastrointestinal tract break down the protective barrier of each segment and release up to 100,000 eggs into the bovine system.

Maturation of roundworms to the adult stage requires approximately three weeks in cattle. During cool nights, these larvae stay at the base of grass near the ground. When sunlight warms the pasture, the larvae migrate up wet blades of grass to settle near the top, frequently swimming in drops of dew.

Winter weather does not destroy the entire larval population on pasture as was once believed. The larvae migrate into the soil or remain dormant under the snowpack until environmental conditions again become favorable for their development.

The growth of parasite larvae in the environment correlates very closely with grass growth in that the same conditions favor both.

Part of the nematode life cycle is on pasture. Pasture management methods designed to reduce third-stage larva populations include the following:

Anthelmintic control of parasites is another tool. Application of dewormers should not be aimed at treating infected cattle showing signs of parasitism. Instead, apply dewormers in a timely manner to reduce infection before symptoms of disease occur.

Treatment should also be aimed at interrupting the life cycle of the parasite in an effort to minimize pasture contamination. Many anthelmintic products are on the market. The following is a partial list of available products, trade names and active ingredients. See Tables 1 and 2. 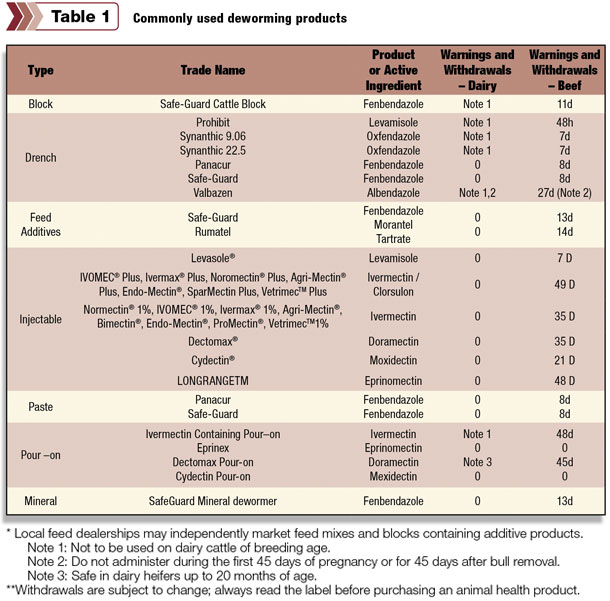 The following categorization can be used as a general guide and adapted to your specific situation.

Jon Hogge is a University of Idaho Extension educator.