Dealing with snakes and snakebites

Venomous snakes pose a danger to stock and stockmen alike because they live and work in snake habitat. Rattlesnakes are the most common risk, but in some regions copperheads and cottonmouths (also called water moccasins) are a concern.

Rattlesnakes usually give warning when approached, but copperheads may just hide and bite without warning. The potency of a bite usually depends on amount of venom injected by the snake and type of toxin, which can vary depending on the species of snake.

In dry seasons, rattlesnakes come off dry hillsides to find water and may be resting along an irrigation ditch or in a cool spot beneath sprinkler pipe. If their rattles are wet after swimming across a ditch or canal, you won’t even hear a warning.

Dr. Robert Cope, veterinarian in Salmon, Idaho, says a rattlesnake’s bite may not be as deadly as other snakes because what it injects into a large animal or a person is usually a cytotoxin [which is toxic to cells]. “There is no neurotoxin involved unless the snake is biting prey [small animals like mice or birds].”

“The cytotoxin damages tissue at the bite site but doesn’t affect the nervous system. Bites from some of the other snakes like water moccasins, coral snakes, copperheads, etc., are more life-threatening,” Cope explains.

Even with a rattlesnake bite, however, effects can vary depending on size of the snake, amount of venom injected, size of the animal or person, and location of the bite. A cow is not as likely to suffer serious consequences as a smaller animal like a dog or cat, or a small child.

Dr. Jen Haugland with Sorensen Veterinary Hospital in Belgrade, Montana, says most snakebites in the Intermountain West are from the prairie rattlesnake (Crotalis viridis), and there are several subspecies.

“The rattlesnake vaccine available for horses or dogs is not tailored to this type of snake; however, it is more specific for protection against effects of western diamondback venom – a snake more common in Texas and the Southwest – but it may have some cross-protection,” she says. Many ranchers routinely vaccinate their stock dogs before snake season, and some also vaccinate their horses.

“There are three kinds of bites. One is a dry bite [no venom]. There is also a bite for killing prey and a bite for defense. Most bites in cattle or horses are defensive bites,” says Haugland. The snake is startled by sudden approach of a large animal and strikes reactively. If the animal gets too close after the snake rattles, the snake strikes and bites. This quick defensive bite is usually a smaller dose of venom, she explains.

“The bite wound usually becomes infected, however. A cow bitten on the leg may have no negative effect from the venom, but we worry about secondary infection; the wound may abscess or infection may travel up the leg and skin may slough off. If the infection goes systemic, the animal has septicemia and high fever.”

If the animal is pregnant, high fever may kill the fetus, with subsequent abortion. “If a cow is bitten, treat her with antibiotics. If she seems sick, take her temperature, and give medications to reduce fever,” says Haugland. You might not lose a cow from snakebite and infection, but you may lose her unborn calf.

Cope has treated many snakebites in livestock and ranch dogs. He says the first priority in treating snakebite is to prevent or reduce resultant swelling and inflammation. “Cortisone [dexamethasone] is usually the best choice. Benadryl and other antihistamines have been suggested in recent years as treatment for snakebite, but I think relying on antihistamines is a mistake. There was research years ago showing antihistamines can actually make the situation worse with a snakebite. I never advise using Benadryl,” says Cope.

Benadryl is ineffective for treating a venomous snakebite, which causes local tissue injury; and cell death, which in turn causes swelling and pain due to release of intracellular contents. The venom causes blood vessels to “leak,” resulting in further swelling and pain. Benadryl cannot counter these effects. “It can ease bee stings, since bee venom causes release of histamine, but snake venom acts via different mechanisms,” Cope says.

“To reduce pain and swelling of snakebite, dexamethasone [a steroid] is more effective, and Banamine [a non-steroidal anti-inflammatory] also helps. Some folks use DMSO [dimethyl sulfoxide] because it reduces swelling very quickly,” he says. Dexamethasone works well for non-pregnant animals, but if given to a pregnant cow, it may cause abortion. For a pregnant cow, use Banamine or DMSO instead.

If the bite is on the animal’s head, especially nose or throat area, swelling may close off the airways and interfere with breathing. “In this situation, you may need to run a piece of small-diameter hose or some kind of tubing up the nostrils to keep the airways open,” says Haugland.

“An easy way to do this with horses and sometimes cattle is to use the casing of a 30/20-cc syringe – just something that isn’t too large for the nostril. The syringe casing is tapered, making it easy to insert into the nose. It’s especially important to do this with a horse that’s bitten on the face or nose because horses can’t breathe though their mouth. Horses and dogs usually get bitten on the face because they are curious and approach the snake,” she says.

Cope says the resultant infection from snakebite is often a worse danger than the venom; the bite victim needs antibiotics. Any broad-spectrum antibiotic will usually work. “For cattle, I usually choose tetracyclines rather than penicillin because penicillin doesn’t do a very good job on gram-negative bacteria. There are a number of antibiotics such as Baytril, Nuflor, Draxxin, etc., that work well in cattle,” he says.

Haugland’s choice of antibiotics includes oxytetracycline or a ceftiofur product, but she recommends consulting your veterinarian for treatment plans. “If you use penicillin, you have to give it daily or even twice a day. Most people choose something longer lasting,” she says. Oxytetracycline should not be given to horses because it burns the tissues.

“Antivenin can be used; veterinarians can order it by same-day or next-day delivery – and some veterinary hospitals carry it. It’s expensive, and most people don’t use it unless the animal is valuable or special [like your kid’s 4-H show heifer]. It usually takes several vials for a large animal [recommendation is three to four vials], but even one vial can make a difference,” she says.

“One problem with snakebite is that not only do you need to get the animal past the first trauma and able to breathe, and make sure that the bite wound doesn’t become seriously infected, but it can cause necrosis [tissue death] of the heart muscle. There may be permanent damage to heart, kidneys or lungs. These are sneaky underlying problems that may show up later. Antivenin helps prevent or reduce the chances for this kind of sequel,” says Haugland.

This could be important for a horse, a good cowdog and even some cattle. It might not matter for a steer that will be fed and butchered, with a short life; we might not worry about possible heart failure later. A valuable dog or cow, however – or horse you’ll be keeping for the next 15 years – might be a candidate for antivenin.

Cattle get bitten now and then, and you may only see the swelling and abscess later. In summer, with flies, there’s also risk for maggots in the bite wound. “It usually pays to get the animal home and treat it. You may need to treat more than once with antibiotics and anti-inflammatories, so you want to be able to monitor these animals,” Haugland says.

Heather Thomas is a freelance writer based in Idaho.

Identifying the most common poisonous snakes 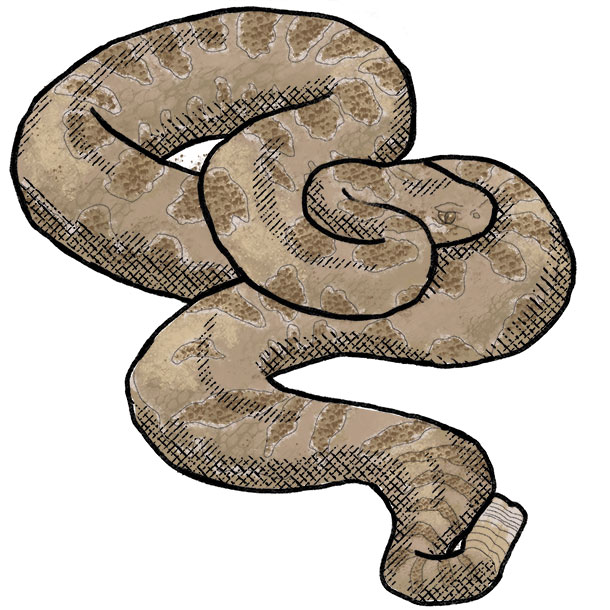 Adult rattlesnakes have a triangular head, blunt nose, narrow neck and stout body; they range in length from 15-60 inches. The background color varies from pale green to brown; a series of brown or black blotches edged with a dark and then a light line extends the length of the body.

The blotches often merge into rings on the tail. The belly is pale yellow to white and lacks blotches. All rattlesnakes have a heat-sensing pit located between the nostril and the eye. The fangs are hollow and hinged, allowing them to be folded back against the roof of the mouth. The tail ends in a rattle that helps warn potential predators of the snake’s presence. 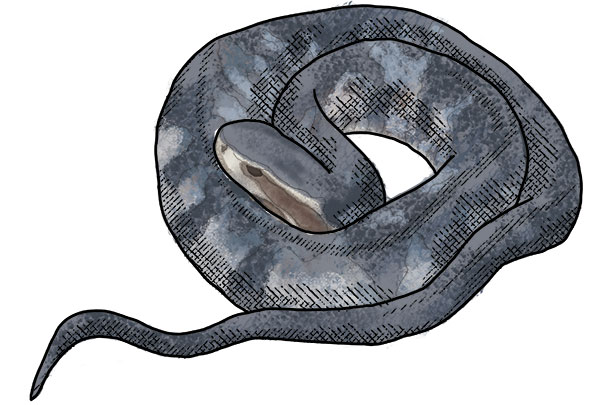 Cottonmouths are large snakes. The adult water moccasin can grow to a length of 35-70 inches and typically weigh between 7 and 20 ounces.

Compared to female cottonmouths, the males are significantly larger and heavier. Dominant colors of a cottonmouth snake can be black, dark brown, banded brown, yellow. 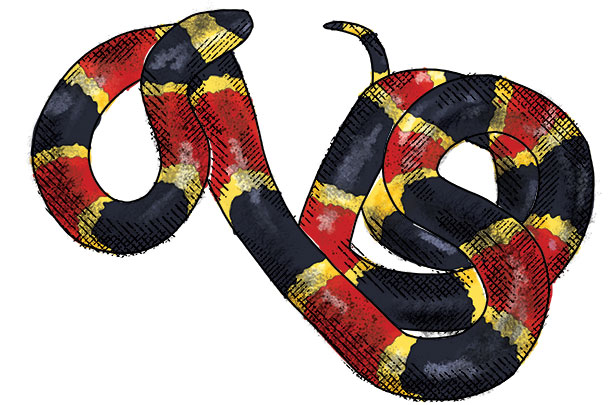 Adult eastern coral snakes are slender, medium-sized – 18-30 inches – snakes that may reach almost 4 feet in length. The most obvious feature of an eastern coral snake is the bright body pattern of red, yellow and black rings in which the red and yellow rings touch each other. The nose is black. 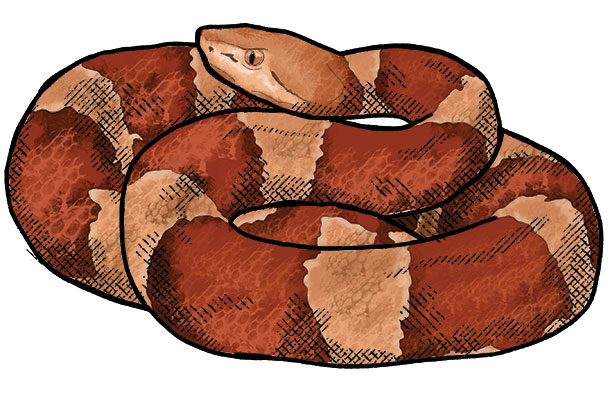 Copperheads look like their name suggests: These snakes feature smooth heads adorned with copper scales. Their bodies can sometimes have a reddish-blown glint to them, and each serpent has dark brown cross bands.

The copperhead’s body is thick, and sometimes it will emit a musk which smells like cucumbers. An adult grows to be 2-3 feet long at most. A juvenile copperhead’s most distinct feature is its lemon-yellow tail.