As a result, the industry appears to have worked through the backlog of cattle that resulted from the plant disruptions in the second quarter. The combination of delayed cattle marketings and good feeding conditions in 2020 raised average cattle carcass weights nearly 3% for the third quarter, also increasing third-quarter 2020 production nearly 3% higher year over year. As a result, beef production set a record for the quarter at 7.1 billion pounds.

In October, packers pushed the slaughter pace higher than the previous year. Based on USDA Agricultural Marketing Service (AMS) data for actual and estimated federally inspected cattle slaughter, the pace on a daily basis in October climbed to 3% above year-ago levels, led by steer and heifer slaughter that was up more than 4% above the previous year. Because of this quicker-than-expected pace of slaughter, the number of fed cattle expected to be slaughtered in the final quarter of 2020 was raised, as was cow slaughter, which raises production to record levels for the fourth quarter at 7.1 billion pounds. These factors increased the 2020 beef production forecast by 85 million pounds from the previous month to 27.2 billion pounds, which pushed it to just above 2019 levels.

The forecast for 2021 beef production was unchanged from the previous month at 27.4 billion pounds.

Figure 1 shows quarterly per-capita disappearance of beef from 2000 through the 2021 forecast period. 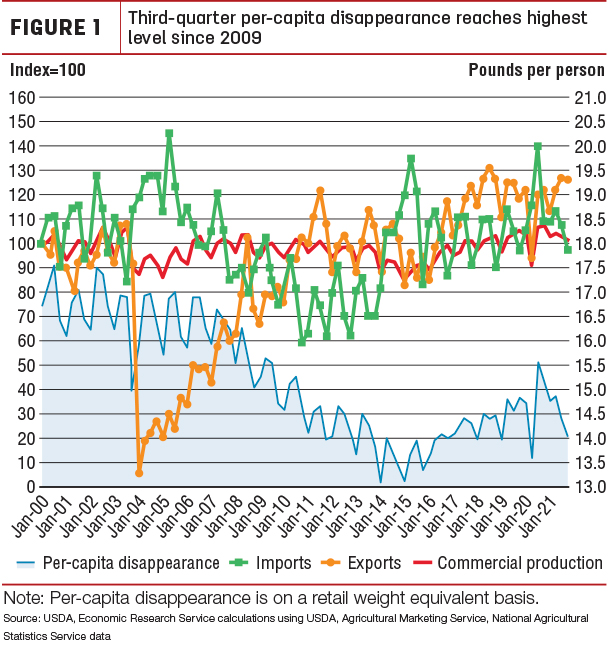 Major components influencing per-capita disappearance are beef production, imports and exports. To demonstrate how changes over time of these components might affect disappearance, these values are indexed on levels in 2000. The second and third quarters are generally the periods of greatest beef consumption in the U.S., as cattle which had been overwintered in feedlots are marketed for slaughter. However, for the first time, domestic consumption dropped from the first to the second quarter in 2020, respectively, from 14.7 to 13.6 pounds per person, on dramatically lower production in the second quarter. 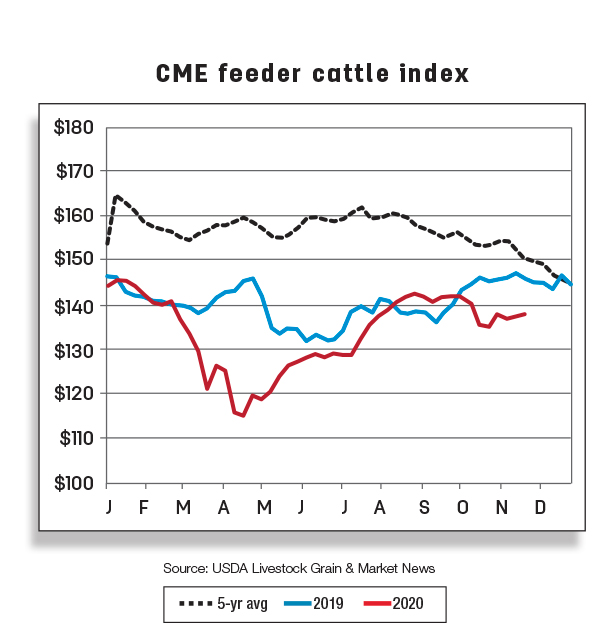 In third-quarter 2020, production climbed to record levels for the quarter, and a combination of firm ground beef demand, large supplies of fat trim from fed cattle and a reduction in cow slaughter supported higher beef imports. Concurrently, exports were below year-earlier, due in part to global economic weakness. As a result, per-capita beef consumption reached 15.6 pounds per person, an amount not seen since 2009. However, per-capita disappearance is expected to recede through the rest of the forecast period. This is expected as production contracts, exports grow on global beef demand and imports fall on lower domestic demand and fewer available global supplies.

Based on the October USDA National Agricultural Statistics Service (NASS) Cattle on Feed report, there were 6.1% more net placements in September than in that month the previous year. This is the largest number of placements for the quarter since 2011. Strong placements in the third quarter pushed cattle on feed on Oct. 1 to above year-ago levels and to the largest number for October since the series began in 1996. 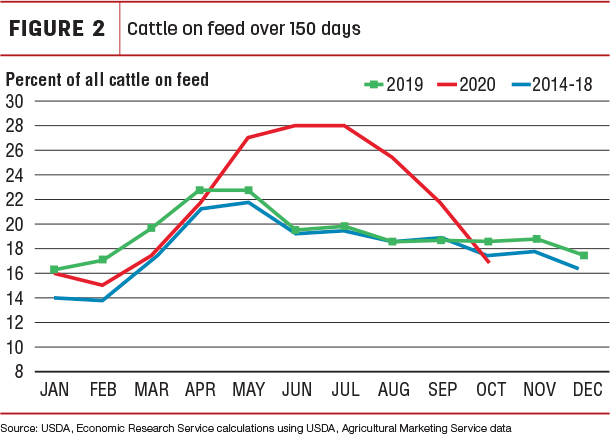 This is the result of an improving pace of fed cattle slaughter, which was faster than a year ago for the last three months and above the five-year average. The quickening slaughter pace, combined with an ample supply of fed cattle at heavier weights, has led to higher expected beef production in fourth-quarter 2020 relative to 2019. Nevertheless, tighter front-end supplies will likely support continued seasonal movement in fed steer prices.

The fourth-quarter 2020 feeder steer price was lowered by $6 to $137 per cwt on price data for October, which was more than $9 below a year ago at $137.55 and on expected seasonal price weakness for the remainder of the fourth quarter. Based on higher expected feed prices for 2021, a lower adjustment for feeder steer prices was carried over into the first three quarters, which were each lowered by $1 for an annual price of $138 per cwt.

U.S. beef imports totaled 300 million pounds in September 2020, a 26% increase from a year earlier and the largest ever recorded for that month. The demand for imported beef in the U.S. continues to be driven by demand for processed-grade beef. The greatest year-over-year increase of U.S. imports in September, by volume, came from Argentina, New Zealand and Uruguay, which were 18.4, 16.5 and 10.8 million pounds, respectively. 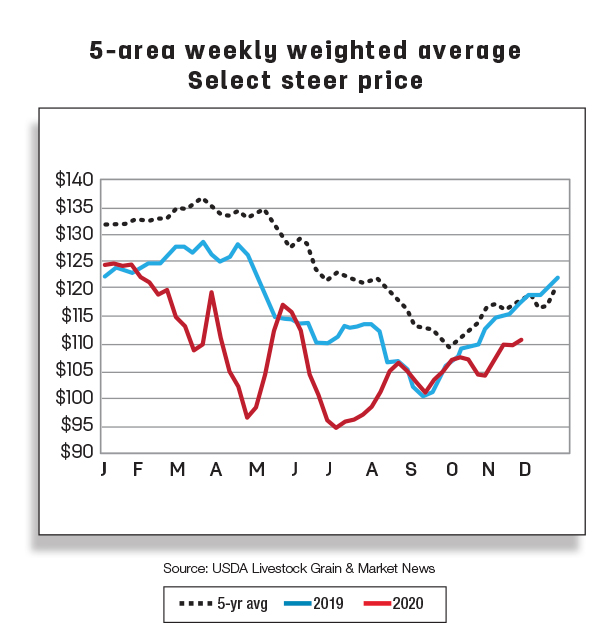 The U.S. imported record levels of beef in the third quarter of 2020, totaling 1.028 billion pounds. Canada and Australia are the U.S.’s two largest beef suppliers, and during the third quarter they shipped 216 and 231 million pounds, respectively, of the total beef imported to the U.S. Besides Canada and Australia, there were other noteworthy key trading partners contributing to the growth in beef imports in the 2020 third quarter. New Zealand and Mexico shipped 76 and 39 million pounds more beef, respectively, than in the 2019 third quarter. Beef shipments from Brazil and Uruguay were also up 33 million pounds each in third-quarter 2020 compared to a year ago. Overall, the major beef suppliers in Central and South America accounted for 41% of the increase in beef in the third quarter, while major suppliers in Oceania contributed 38% of the growth.

Figure 3 reveals how 2020 third-quarter beef imports compare with the five-year average and other years. 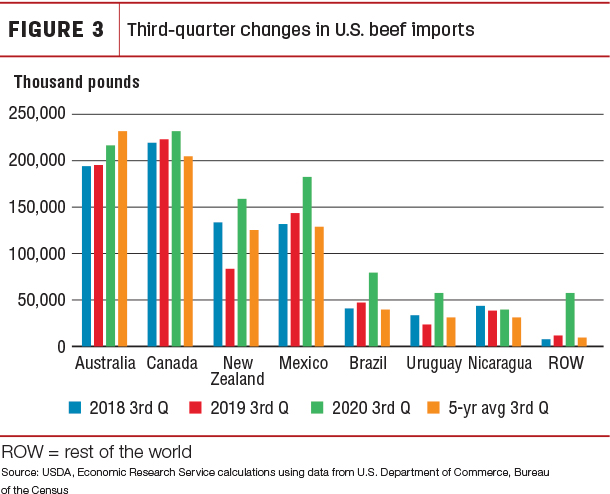 Exports to Mexico, other markets more than offset record sales to China

In addition, there were several other declines in U.S. exports to Asian countries, including Vietnam, Philippines and Indonesia, who were down 2.6, 3.3 and 2.4 million pounds year over year, respectively. Some modest growth occurred in a few of the major destinations such as South Korea, Canada, Hong Kong and Taiwan that helped increase U.S. beef exports in September. Similar to the previous month, U.S. beef exports to China set another record at 12.6 million pounds, up 2 million pounds from the August record. 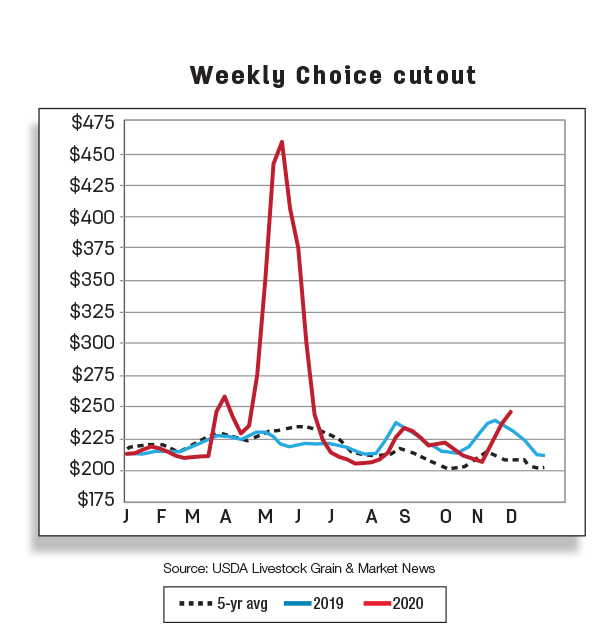 The 2020 third-quarter beef exports totaled 758 million pounds, about 30 million pounds less than a year ago. U.S. beef shipments to Mexico declined by 48.7 million pounds during the third quarter, partly due to a sluggish economy and weak peso relative to the dollar. Based on year-to-date data, in 2019, Mexico was the third-largest U.S. export market – but this year, Mexico ranks fourth. Also notable is that the largest increase in U.S. beef exports in the third quarter, volume-wise, went to South Korea (15 million pounds). South Korea, the U.S.’s second-largest market, was down 2% year to date when compared with 2019.