Understanding the benefits of chromium supplementation in the feedlot

A variety of strategies and products exist to prevent disease, improve growth and maintain overall health in feedlot cattle. However, one of the more underutilized of these strategies is the inclusion of chromium in the diet.

It was once thought that feedstuffs contained adequate concentrations of this essential trace mineral, yet recent studies have demonstrated that among grains, forages and byproduct/miscellaneous feeds, there are actually low chromium concentrations. These findings prompted research interest in examining the implementation of chromium in the feedlot diet and its effect on feed costs and profitability. As a result, it turns out that chromium supplementation has nutritional and financial benefits worth considering.

Chromium as an essential nutrient

Chromium primarily acts to improve insulin sensitivity and reduce the release of the stress hormone cortisol. The more insulin-sensitive an animal is, the more glucose will be readily available for cells involved in growth and immunity, two vital aspects of beef production.

Growth, immunity and stress go hand in hand when it comes to feedlot productivity, as stress plays a significant role in the ability of an animal to generate an adequate immune response to fight off infection. Furthermore, fighting infection competes with muscle growth. Therefore, improving overall immunity in the feedlot is essential to minimizing losses due to health issues and maximizing production.

Typical stressors in the life of a feedlot animal

A common hindrance to productivity in the feedlot is stress. Stress can be a somewhat elusive term, as a multitude of stressors/responses exist, but generally it can be defined as the physiological or behavioral adjustment an animal makes to cope with a stressor and maintain balance (homeostasis) within the body. It is necessary to identify stressors in the feedlot in order to prevent and/or alleviate them.

Most cattle arriving to feedlots have undergone what are considered “stressful” events, such as transportation, temporary change in diet, commingling with cattle from other farms and on-arrival processing (vaccination, dehorning, castration and eartagging). Classic signs of stress in cattle include:

The stress response and immunity

During a stress response, there is more than meets the eye occurring internally. Glucocorticoids (primarily cortisol) and catecholamines (adrenaline and noradrenaline) are released in the body, altering carbohydrate and protein metabolism, growth and immune function.

In cattle, cortisol has been associated with:

The nutrients required to supply an immune response consequently partition nutrients away from growth – not what you need when producing beef. This activation of the immune response due to stress ultimately leads to poorer feed efficiency due to these shifts in nutrient metabolism and a decrease in feed intake. Minimizing the effects of stress on the immune system is vital to minimizing profit loss.

Glucose requirements of the immune system

The primary fuel source of activated immune cells is glucose. Glucose also happens to be the primary fuel source for muscle growth, so it is easy to see how these two metabolic systems will compete with one another when limited glucose is available. Furthermore, the animal’s body prioritizes immunity over growth, naturally, which increases the glucose requirements of the animal during an immune insult. The distribution of glucose to various tissues based on a hierarchy of metabolic needs results in the list below.

What can the animal do with more glucose?

To further exacerbate this scenario, stress commonly leads to a decrease in feed intake, which makes glucose even harder to come by. The primary stress hormone, cortisol, is also continually released during a stress response, signaling the liver to make its own glucose, as there is a shortage.

To keep up with these metabolic changes, the pancreas releases more insulin, which happens to be the “key in the lock” to the door that allows glucose into cells. This entire vicious cycle becomes a hindrance to growth because insulin resistance develops, leading to decreased glucose uptake by muscle and fat tissues. Further adding insult to injury, as an animal becomes increasingly insulin resistant, more fat tissue is mobilized for energy, which leads to the oxidation of nonesterified fatty acids in the liver and a subsequent decrease in feed intake.

Improvements in immunity and production efficiency

Bovine respiratory disease (BRD) and other illnesses in the feedlot have been estimated to cost the U.S. beef industry close to $1.5 billion annually. Interestingly, the prevalence of BRD remains the same today as 30 years ago, making it a pesky problem for producers. Research demonstrates that chromium propionate, the only FDA-permitted organic source available for use in cattle, produces a consistent and repeatable response that optimizes insulin sensitivity, increasing the opportunity to maximize feedlot performance and profits. 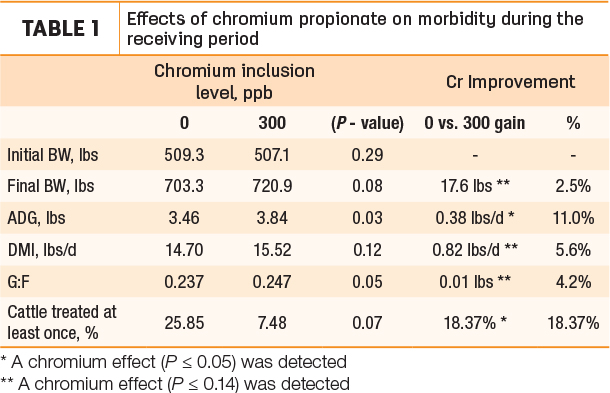 Researchers concluded that chromium supplementation enhances the acute phase response of steers to a lipopolysaccharide challenge, which may expedite recovery.

Feedlot health also directly relates to carcass merit in cattle. Table 2 demonstrates the economic effect that BRD incidence, as evidenced by treatment, has on feedlot performance and carcass traits. 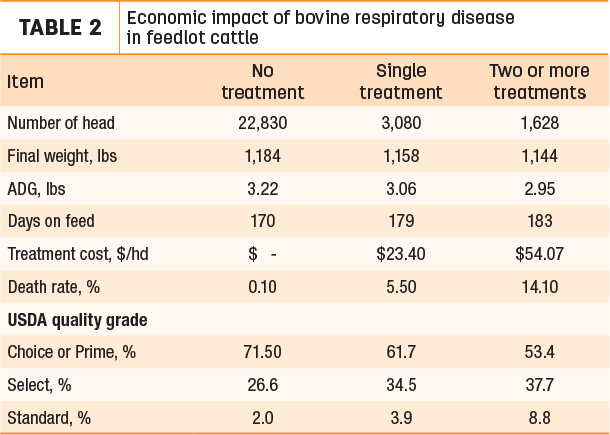 The interactions among growth, immunity and stress are important to understand in order to achieve optimal nutritional management in your feedlot operation. Chromium supplementation primarily acts to improve insulin sensitivity and reduce the release of stress hormones – ultimately leading to a minimization of production losses in addition to improvements in overall health, growth and carcass merit. These improvements should ultimately contribute to lower veterinary/medical costs, lower discounts at the packer and a higher-quality beef product.