Since the third quarter, beef cow slaughter has increased sharply. Based on the AMS reports of Actual Slaughter Under Federal Inspection for the first four weeks of December, the year-over-year change in federally inspected slaughter of beef cows ranged from 13% to 25% higher. The increase in non-fed cattle slaughter more than offset a decline in expected fed cattle slaughter in December.

Based on the NASS Livestock Slaughter report for November, the pace of beef cow slaughter was considerably above year-earlier levels. Since the week ending Nov. 15, prices for live cutter cows have remained more than 10% above prices for the same period a year ago. This, coupled with tight forage supplies for some producers, has likely encouraged higher culling rates. The National Agricultural Statistics Service (NASS) Cattle on Feed report for December estimated 2.1 million head of cattle were placed in feedlots in November 2019. This was larger than expected and will likely generate greater expected cattle marketings and beef production in second-quarter 2020. However, because those calves were likely placed in feedlots rather than remaining on winter wheat pastures as expected, the placement forecast for first-half 2020 was reduced. As a result, fewer fed cattle marketings are anticipated in second-half 2020, contributing to less expected beef production during that time.

Further, increases in cattle dressed weights are anticipated to be slower in 2020. Respectively, the forecast for 2020 beef production was lowered by 75 million pounds from the previous month to 27.4 billion pounds. NASS will release the semiannual Cattle report on Jan. 31, which will provide estimates of heifers held for breeding and an insight into the number of cattle that might be available for placement during 2020. 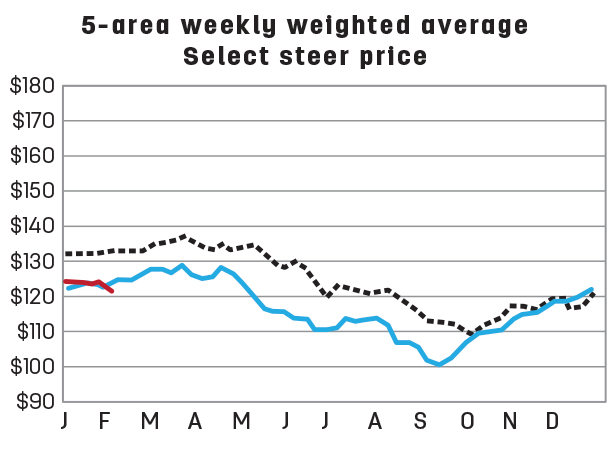 Wholesale beef prices are below year-ago levels, but packers continue to pay slightly higher prices than a year ago to bid cattle out of the feedlots despite weaker margins. This strength was carried into first-quarter 2020, and that price forecast was raised by $3 to $125 per cwt. However, larger numbers of cattle are expected to be available for marketing during the second quarter, which is expected to moderate prices. The 2020 average price for fed steers is forecast at $117.50 per cwt. The fourth-quarter forecast was raised to 715 million pounds due to strong beef imports in November and in anticipation of continued strength in December. No change was made to the 2020 forecast.