Cooling dry cows: Impacts on the cow and calf

Ashley Hagenow
While many producers involved in the dairy industry are likely familiar with the production benefits from cooling cows during lactation, less often do we think about cooling dry cows and its long-term impacts on cow performance, health and calves.
Ashley Hagenow

In the webinar, “Cooling Dry Cows: Impacts on the Cow and the Calf,” Dr. Geoffrey Dahl, Ph.D., a professor in animal science at the University of Florida, explained the effects of heat stress on milk yield, metabolism and immune status, which occurs in cows and in a cow’s uterus. Dahl focused his research on the impacts of heat stress in dairy cattle, especially in dry cows, and divided the focus of the webinar into two areas: exploring how heat stress affects cows late in gestation and examining the impacts of late-gestation heat stress on calves both early in life and as those animals move into the production stage. The webinar concluded with the economic implications of heat stress in dairy cattle.

Dahl cited a heat stress study conducted in Gainesville, Florida, where environmental conditions between the treatment groups varied. The study was broken into two treatments: dry cows treated with heat stress and a cooling treatment. Cows on the cooling treatment were provided cooling fans over stalls and soakers running for 90 seconds every five minutes once temperatures hit 72ºF. Cows in the heat-stress treatment group were placed in a shaded freestall barn without active cooling from fans or soakers during the entire six-week dry period.

“Once we remove that active cooling, those animals, even though they are in shade and in a barn, are going to experience pretty profound heat stress,” said Dahl. “We impose that heat stress for the entire dry period.”

Impact of heat stress in cows

The effects of heat stress in this study included an increase in mean rectal temperature, with cows in the heat-stress treatment group experiencing an average of one full degree higher in rectal temperature than cows on the cooling treatment. Another major effect from heat stress was a decrease in milk production. Dahl mentioned that cows in the heat-stress treatment group produced around 8 to 10 pounds less milk than animals under the cooling treatment. Not only did heat stress affect cows in the first lactation after calving, its impact was felt in the subsequent lactations of each heat-stressed animal.

After cows calved, they were all cooled, fed the same diet, housed in the same pens and on the same milking schedule, so the major difference between the treatment groups was how cows were managed during the dry period.

1. Do I have to cool cows the entire dry period?

2. Do heifers need to be cooled pre-partum?

To address the first question, cows that experience heat stress during any point in the dry period are prone to an increase in rectal temperature and respiration rate, a decrease in gestation length and a reduced milk yield. These results were found from four total treatments in a separate study, where one treatment group experienced heat stress during the entire dry period, one group was cooled the entire dry period, one group switched from active cooling to heat stress treatments and the final group switched halfway through the dry period from heat stress to cooling treatments. The three treatment groups exposed to heat stress at any point encountered some form of the negative effects mentioned above.

“There are important impacts of heat stress both early in the dry period and also late in the dry period,” Dahl said. “Simply cooling cows for the close-up period would not be expected to recover the effects in the long term. We really want to get cows cooled for the entire dry period.”

There was a similar result to answer the second question, with a study finding that actively cooling heifers 60 days before parturition decreased respiration rates and rectal temperatures in these animals. Cooling close-up heifers had positive impacts on milk yield and productivity, with cooled heifers producing 8 pounds more milk on average. 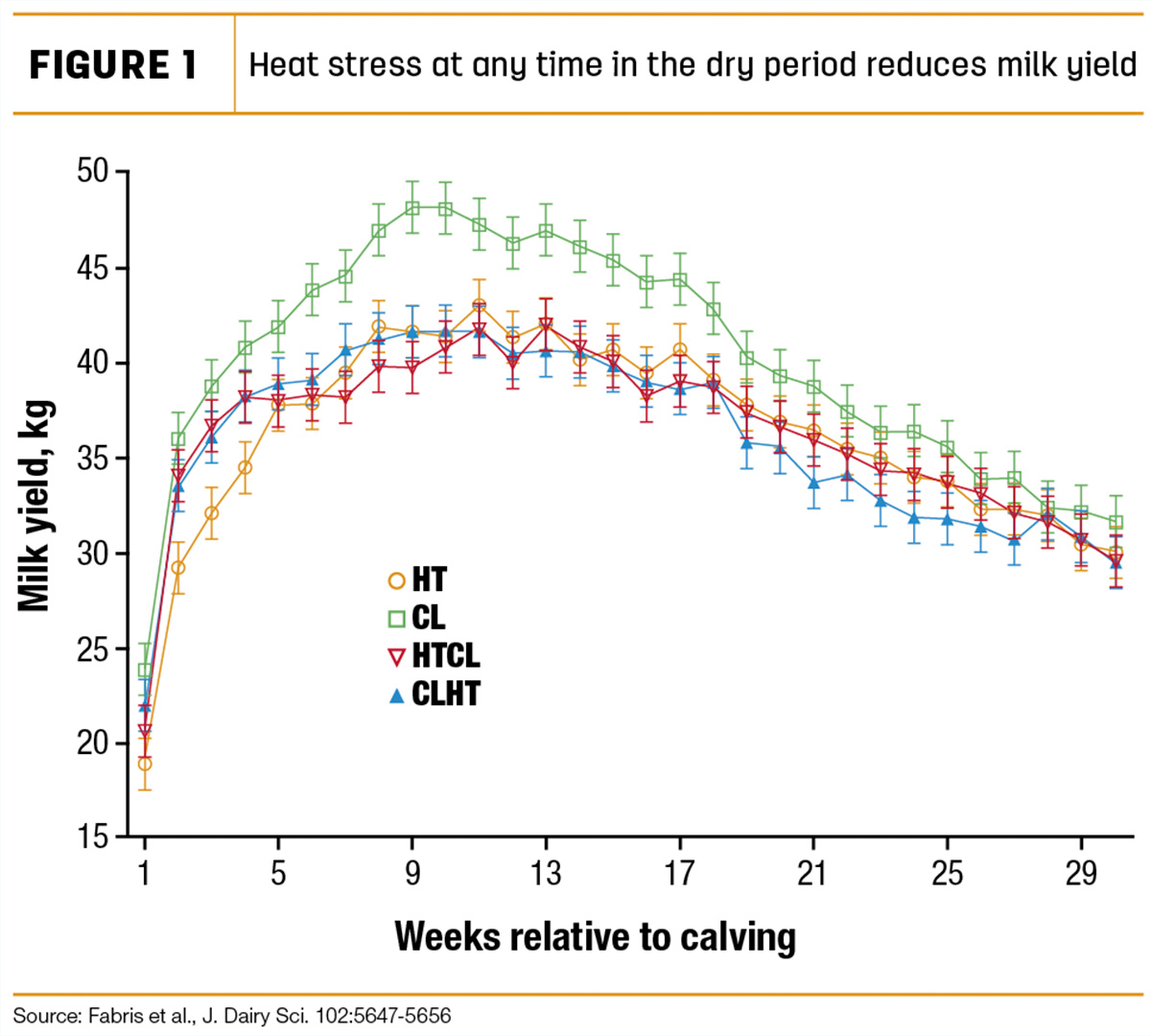 Impact of heat stress on calves

Not only does heat stress impact cows late in gestation, but its effects can also be felt by calves early in life and later on. Studies conducted on calves to determine effects on birthweight, weaning weight and immune function showed different impacts between calves from dams that were cooled and calves with heat-stressed dams.

The results of these studies concluded that cooling increases birthweight because calves experience a longer gestation, while in utero heat stress reduces weaning weight. Calves born to heat-stressed dams had lower efficiency in immunoglobulin absorption from colostrum, also resulting in a more rapid gut closure. Overall, it is difficult for calves to overcome heat stress impacts once they are born.

Aside from the impacts of heat stress early in a calf’s life, studies found that calves undergo long-term effects of heat stress. Looking at combined records of 150 animals from a number of studies conducted over four years, the data set demonstrated heifer survivability and productivity. From these studies, it was determined that in utero heat stress:

Interestingly, in utero heat stress does not affect mature bodyweight, since calves compensate for lower bodyweight at birth during the second year of life.

“What we are finding is that calves born to heat-stressed dams are programmed to have lower health and productivity throughout their life,” said Dahl. This is why it is crucial for active cooling to be implemented in late-gestation cows to reduce heat-stress impacts in their offspring and improve survival in the herd. 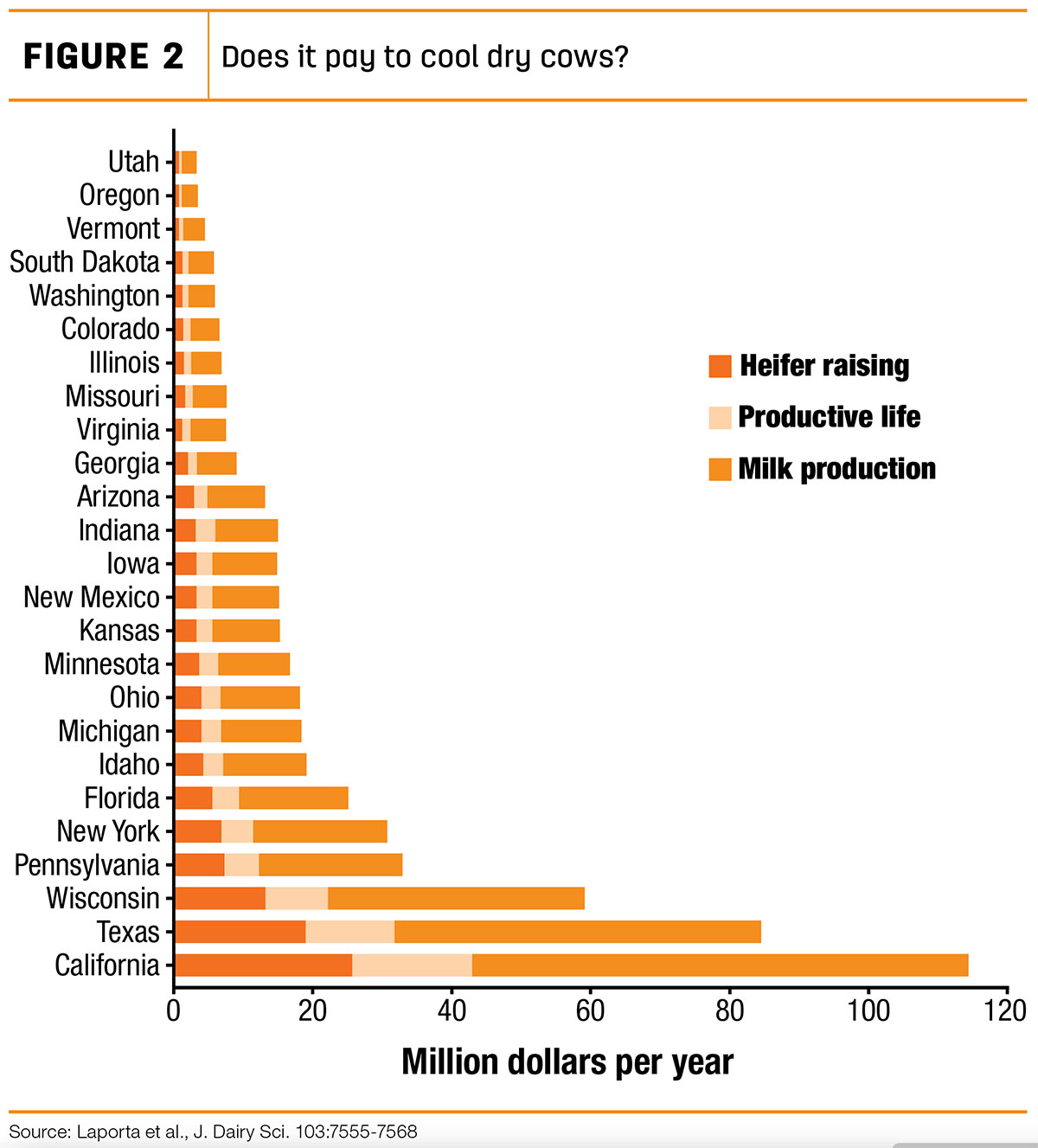 Does it pay to cool dry cows?

To determine the economic impacts of late-gestation heat stress in dairy cattle, cows were analyzed in the top dairy-production states across the country. Sensitivity across milk prices, milk production and estimates on barn values were all factors analyzed. In all cases, it made economic sense to invest in heat abatement strategies, such as fans and soakers, to improve outputs for the next lactation.

While these analyses did not include the impact of heat stress on calves, a separate study looked at the cost of heifer raising and its impact on productive life and milk production in the top 23 dairy-producing states. There were significant impacts across the board on cows that experienced heat stress in the dry period on their calves.

“We can see there are significant impacts across the country of those cows having experienced heat stress during the dry period and the effect on their calves,” said Dahl. “When we total those together, the effect on the cow and the calf is about a 1.5-billion-dollar hit annually on the dairy industry in the U.S.”