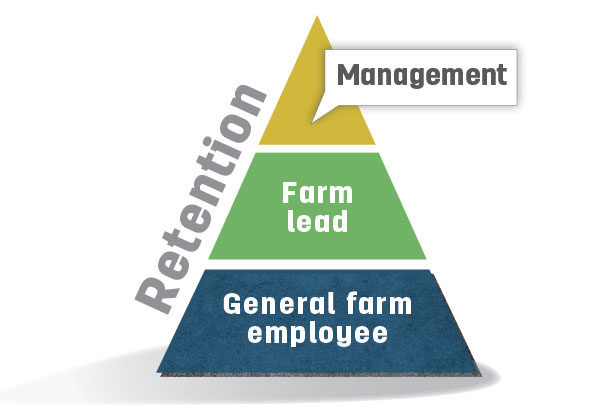 Mike Bray
With the turbulent economy over the last two years, labor has been a big struggle across the board, and this labor shortage has affected every on-farm job from milkers to managers.
Mike Bray

For years, high turnover rates have impacted farm finances, productivity and future business outlook. Some have seen turnover rates as high as 75% year-over-year. With those numbers and a labor shortage nationwide, let’s dive into ways we can close the gap.

Starting at the top of the pyramid with the steering mechanism of the farm and working our way down, we’ll first look at management retention. If you were to ask around, most dairy owners would tell you that having a competitive salary, housing and a work vehicle would be enough to keep managers happy and retain them in their jobs; however, that might not be the case anymore as times are changing.

One of the most common comments I hear from managers is: They feel like they’re expected to lead the dairy team, but certain decisions related to the key factors of their job performance are out of their control, such as which sires they breed their cows with, who the breeder is, farm SOPs or even the hiring and firing of their own employees.

One of the hardest leadership decisions to make as a dairy owner is how and when to be a follower and let your manager lead his team. As Aristotle put it, “He who cannot be a good follower cannot be a good leader.”

It takes a great deal of effort and trust as an owner to follow and let the manager lead, which is what they are hired to do. Letting the manager lead isn’t completely letting go of the reins but rather stepping back into a supportive advisory role. On farms where I have seen this effectively performed, farm productivity significantly increased, retention rates drastically improved, and quality of life for both owners and employees increased. Managers also learn from the owner’s example, which brings unity and a greater team effort to the farm team.

As we move to the middle of the pyramid, we look at the fuel of the farm, which are the team or department leads consisting of milk barn/shift leaders, hospital leads, maternity/calf leads, farming/equipment leads, etc. As a manager assumes a supportive advisory role, they can also support and advise their team leads to be leaders in their own departments.

Giving a team lead the encouragement and confidence to make decisions regarding the implementation of SOPs in their area gives them a greater sense of responsibility and pride in their work. This helps reduce micromanagement. However, to ensure projects are being done promptly and efficiently, managers can follow up with frequent meetings and check-ins to guide team leaders. On farms where I have seen this put into practice, department performance and productivity increased, team leads were developed and prepared for future promotion to the management team, and the workload of the management team was reduced.

Now at the base of the pyramid, the pistons and engines of the farm are the general farm employees. Managers and team leads have a direct role in training and developing employees into their future roles on the farm. If general farm employees aren’t viewed as having the potential to move up or into other positions around the farm, then employee retention rates are destined to be suboptimal. It is the leader’s job to look for strengths and weaknesses in employees and build on current strengths while developing weaknesses into strengths for the future of the farm.

The key to developing farm employees is training them. This comes in multiple forms. When a combination of these forms are utilized, they work in harmony to turn a new employee with no experience into the best employee on the farm.

The first form is one-on-one training, whether that’s with a manager, a team lead or even a peer who serves as a mentor to that employee. This one-on-one time allows the employee to feel comfortable asking the questions they may or may not feel comfortable asking in a group setting while allowing the manager or lead to provide individual training and correction specific to that employee.

Next is group training led by a manager or team lead. This form of training allows for the development and synchronization of the department/team. Changes to SOPs or seasonal adaptations to jobs being performed can be addressed in these meetings, allowing the entire team to be on board and department-wide tasks to be performed with consistency. We all know consistency in performance has many benefits throughout the farm.

The third form of training is often overlooked but can make just as much of a difference in employee retention as empowering your employees to take responsibility in their jobs. That is group training conducted by an outside source, such as a consultant or trainer not associated with the daily operation of the farm.

This is often overlooked because we may think to ourselves that consultants are here to tell us what we’re doing wrong, when in reality they can strengthen the direction of the farm. Involving a consultant trainer in employee training removes the peer aspect and shows the effort and resources managers and owners are putting into giving employees every tool they need to succeed in their jobs.

When leading by example, leading by following and training are used hand in hand from the top of the pyramid down, employee retention can be optimized, overall farm productivity maximized and farm cash flow strengthened for future improvements to the farm.