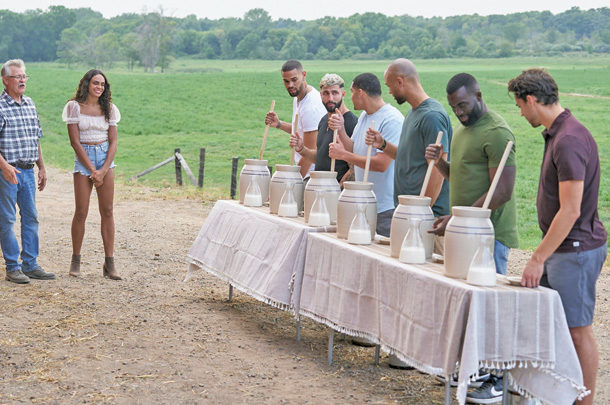 Email Audrey Schmitz
The Bachelorettelast June, she immediately jumped at the chance to showcase Minnesota agriculture to the world.

With the help of Midwest Dairy and the Minnesota Milk Producers Association, they were able to identify a farm close to Minneapolis with a picturesque location. They decided on the Miron Dairy Farm in Hugo, Minnesota.

“The show hit the jackpot with this family – the farm is beautiful, the entire family is wonderful and supportive, they were accommodating to the cast and crew, and Fran Miron was a natural on camera,” Coffelt says.

Fourth-generation dairy farmer Fran Miron was excited about the opportunity to showcase dairy and his 160-cow farm.

“We have done so much in the way of educational outreach on our farm for years, and this really provided an opportunity to expand our reach to the public, who in many cases are so disconnected from the farm now,” Miron says. “I’m one of those people who firmly believes the public needs to understand what we do out on the farm, how we care for our animals and how we manage the land and the resources we have. I was excited because I felt this was a type of audience we typically have not been able to reach, and certainly a national audience we were able to share our agricultural story with.”

Prior to filming the show, production team members visited the farm to meet with Miron, take pictures and to scope out the place. They were then again later visited by the producer with more team members, where the decision was made to contract the event.

“We talked to the producer and their crews about some of the various activities they wanted the bachelors to participate in, so we gave them some ideas and they had some ideas of their own,” Miron says.

The producers wanted to show the bachelors getting “down and dirty” on the farm. So they had the bachelors milking cows, feeding baby calves, churning butter, shoveling manure and sculpting butter on Aug. 20, 2021, during the TV episode’s filming.

“They really wanted the guys to milk cows by hand, which was a little different,” Miron says. “I don’t know that the program provided a glimpse of the technology we utilize on the farm. Milking cows by hand is certainly an old way of doing things, but that was the experience they wanted the guys to have. So they did that. They also took care of calves and did some bottle feeding.” 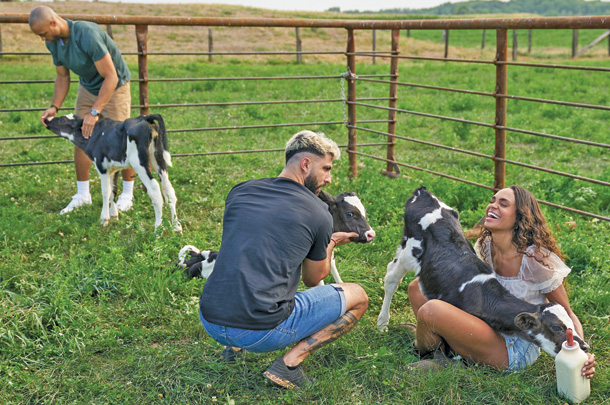 The producers of the show had an interest in connecting with some of the Minnesota traditions, so with filming just days before the opening of the state fair and crowning of the new Princess Kay of the Milky Way, they decided to have the bachelors compete in a butter sculpting contest that included Brenna Connelly, the Princess Kay at the time.

“We also had suggested to them churning butter because it’s something our daughters and daughter-in-law did when they were Princess Kays,” Miron says. “They would go into school classrooms and demonstrate to the kids the skill and how milk is made into different products. So they had the bachelors churn butter on the farm and turn milk into butter. It was kind of neat for them to experience that as well.”

In the evening, Miron pulled out an old tractor and hitched up a wagon his brother-in-law built and took the group on a hayride around the farm.

“The production crew was really excited about that and thought it would make a nice romantic evening in the moonlight,” Miron says. “We’ve got a pond along our driveway entrance to the farm, and it kind of made, I think, for a neat filming setting with the bachelors and the bachelorette on the hayride.”

The farm date episode at the Miron dairy farm aired on Nov. 23, and the butter sculpting part of the date including Princess Kay aired Dec. 6 during the “Men Tell All” episode. Miron was very apprehensive about how the show would turn out and how the farm was going to be portrayed in this type of setting, but he says they did a fabulous job. 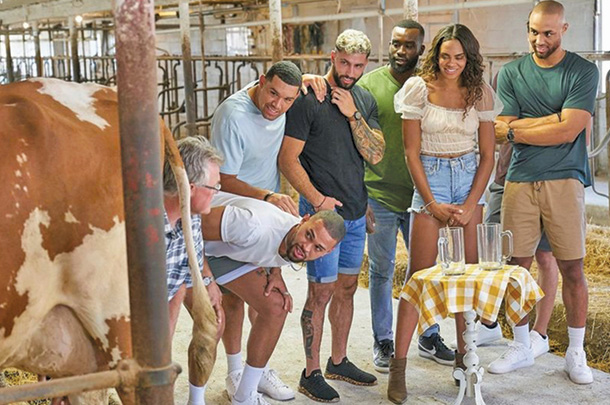 “I was really pleased with the outcome, and I’m very proud of how well it turned out,” Miron says. “We’ve had so many people who either heard about the show and watched the program and regular viewers of the show that contacted us afterward. So I’m hoping that it added to their viewing audience.”

Miron also says the TV crew was very respectful of the farm the day they did the 14 hours of filming.

“There was very little litter or debris from the entire day left on the farm,” Miron says. “They really were fabulous and respectful of our property.”

The most challenging part for Miron was having to quarantine and test for COVID-19 in order to be in contact with the production crew members. Due to the extensive testing and protocols, Miron was the only family member to be on camera.

“Because we have livestock that has to be milked and fed day-to-day, someone had to be on the farm all the time. So it was really just me that was able to be in contact with the production crew, and that was probably the most difficult thing,” Miron says. “I think the rest of the family was certainly curious and wanted to be a part of what was going on that day, but we were really unable to quarantine and test the entire family.”

Another challenging aspect was not being able to disclose anything about the production or the fact that they were hosting the show on their farm.

“This is kind of a once-in-a-lifetime opportunity, and we were really not able to share that with anyone until after the airing of the program,” Miron said.

The most rewarding part for Miron was interacting with the production crew and learning about their upbringings.

“People from all over the U.S. and Canada were there that day, and it was fun visiting with the crew, learning about their backgrounds and answering their questions about the farm and our operation,” Miron says. “That kind of outreach is always rewarding for me, probably because of my interest in agricultural education.”

PHOTO 1: Fran Miron, left, instructs the contestants how to churn butter during the filming of “The Bachelorette” on the Miron Dairy Farm