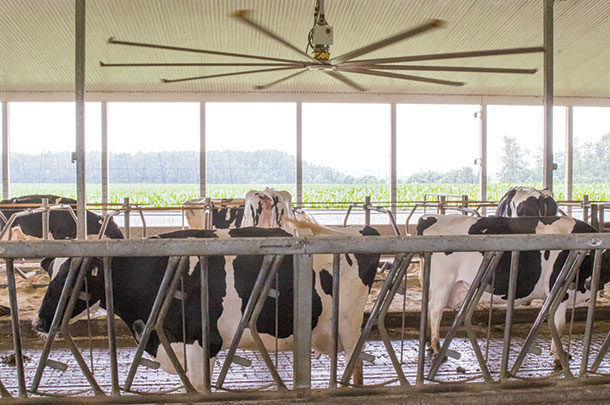 Overstocking: Your pleasure is your cows’ pain

Nigel B. Cook
With the market turmoil of the last few years, dairy producers are once again increasing stocking densities on their farms and enjoying larger milk checks from the increased milk shipped. It’s so easy to add a few extra cows and reap the rewards.
Nigel B. Cook

However, it seems that we have forgotten the lessons learned the last time the industry went through a cycle of overstocking triggered by low milk prices. Perhaps now is a good time for a reminder of the many negatives that are associated with this approach.

There is a mountain of evidence that demonstrates that negative things happen to cows when we overstock freestall pens. It is also true that most overstocking research is not conducted on the numbers of cows we see on commercial dairy farms, and it is done for a limited duration – leaving some gaps in our knowledge. However, we’ve observed that the negative impacts are rarely immediate – they occur over months to years, rather than days to weeks – and for that reason it is sometimes difficult for producers to associate cause with effect. It is also the reason why there is so little quantitative research on the economic impacts of overstocking.

We now have studies that have looked at the effects of overstocking. Here’s what they found:

Since pen layout impacts stall stocking density and bunkspace differently, these negative impacts begin at around 24 to 30 inches of available bunkspace per cow, depending on the size and age of the cow. For example, increasing stocking density from 200 to 300 cows in a 200-stall, head-to-head 2-row pen reduces the bunkspace from 28 inches to 19 inches per cow.

Other areas of the farm are also impacted when overstocking occurs. Such as:

o Manure increases in the pen. The increased manure has to be dealt with in the manure handling system, with negative impacts on sand reclamation systems, which struggle to handle the increase in organic solids.

Producers see increased milk shipped from the farm, which gives them a bigger milk check in the short term. However, the negative impacts of overstocking creep up in the long term. Lameness rates increase because of lost resting time, milk per cow goes down around 6 pounds or more per cow per day, milkfat and protein is reduced, and somatic cell count increases; thus, the value of the milk shipped is reduced.

Poor fresh cow performance manifests in increased turnover and death rates, along with reduced peak yields. Compounded, fertility losses lead to a shortage of replacements. It may take two years to realize the full impact of the decision to overstock, but these are the signs of overstocking we repeatedly see over time.

It will always be the case that elite managers will find ways to compensate for some of these negative effects, but farms should be managed so the average producer can succeed. Overstocking has a significant negative impact on dairy cow welfare and on our social license to continue to milk cows. No one has to drink milk from cows anymore, and if we continue to do things that are clearly harmful to our cows, like overstocking, why would the general public continue to have faith in the industry’s ability to do the right thing?

Think about the long-term consequences of overstocking when you are tempted to add a few more cows to the pen to reap short-term rewards – they are real and significant for the individual cow and can impact the industry as a whole.