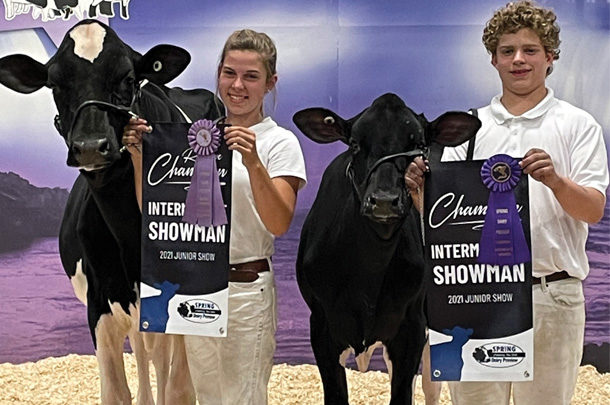 Leading the Way: Building on success

Katie Coyne
In rural western New York, just south of Buffalo, Isaac Folts rises each day before school to head out to the barn to do chores. Unlike most youth, Isaac, who is 15, heads out to his own barn.
Katie Coyne

Isaac and his parents, Ginny and Josh, are first-generation farmers and milk 125 cows in a robot barn. Isaac developed a keen interest for showing cattle at an early age and has developed that interest into success in the show ring as well as a successful side business.

Three years ago, Isaac began asking his parents if he could convert a high-roofed storage shed on their property into a show barn for his elite show cattle. They told the straight-A student he would have to earn the money to build the facility he wanted. Isaac began asking questions and visiting nearby show herds to decide what had worked well for those herds and what would work in his unique barn. He now had a plan and a budget to finance it all.

Fortunately, those questions were answered rather quickly and as a pleasant surprise. Isaac’s efforts of studying mating decisions and cow families to produce high-type cattle paid off in the spring of 2019. That’s when he brought a home-bred, eye-catching junior 2-year-old to the Eastern National Spring Show, which he then sold to an elite showperson for a substantial amount of money. It was at least enough to get started on his new barn. J-Folt Awesome Hokulani went on to receive All-American nomination recognition after placing in the top six at the World Dairy Expo, coupled with the win at the Eastern National Spring Show. In addition to Hokulani, Isaac has bred, owned and developed numerous All New York and Junior All-American nominations.

After a visit to Oakfield Corners Genetics barn, Isaac decided he would make large, comfortable pens measuring 16 feet wide, with a 12-foot scrape alley and a 19-foot-deep pack area with a shavings pack in the back and a scrape alley in the front. Cows eat and are milked in the tombstone headgates, a recommendation from mentor Dean Sharp. Isaac does not have any headlocks, as all of the animals are halter broke and are caught to milk. He adjusted the size of the headstones to accommodate cows, heifers or calves.

One observation Isaac made on his visits was: Waterers were partitioned off on three sides. He wasn’t sure that setup would give the cows enough easy access to the waterer, but he took the recommendation of Jonathan Lamb and built the three-sided cement partitions around the automatic waterer. After just a few weeks, he noticed the waterers were free of debris and rarely had shavings in them. He also noted that the cows learned quickly how to access the water without conflict.

Manure alleys are scraped twice a day and feed is swept up multiple times each day, until manger fronts are installed later this year. Isaac believes feeding hay and sweeping feed in increases intake and allows for monitoring time. Cattle are bedded with bulk shavings, and packs are picked numerous times a day to keep cattle clean and dry. The cows are milked with a portable milker and the milk is fed to calves housed in hutches in another section of the same large barn.

While Isaac was the instigator and architect for the show barn, his parents and brother help out regularly when he is at shows. He also enlists the help of his cousin, Allison Gable, who has developed a keen interest in showing and showmanship because of Isaac’s success. The two teamed up to place first and second at the very competitive Spring Preview Show showmanship competition earlier this summer. Isaac is the first to humbly share that he has had many mentors, as his parents were not involved in the dairy business and completely new to showing cattle. He currently works with other youth, friends and youth organization leaders as a mentor and student both. This past winter, Isaac was host to Congressman Chris Jacobs, who had stopped in to observe and share ideas with this farm family. 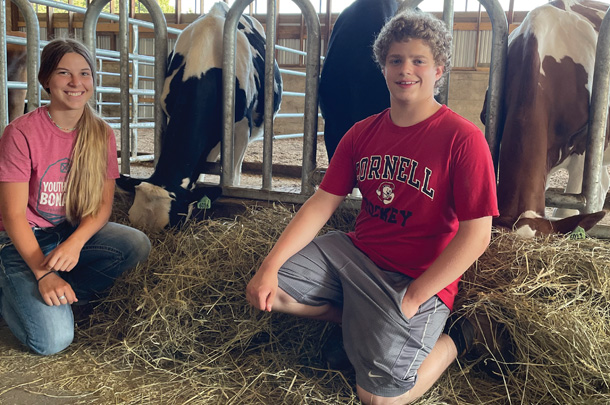 In addition to raising and milking his own show cattle, he has begun a side business of boarding cattle for others who are seeking top-notch care for their cattle. He currently has three clients and has actually had to turn people away as his pens are full. Because of the size of his barn, he can build more pack pens as business increases – but for now, he feels it’s just the right size so he can get away to attend shows.

Isaac is an elite hockey goalie as well and has been part of a traveling team for several years so, for now, the size of this special area is adequate. His future plans are to attend Cornell University and, of course, return to the farm to continue to manage his elite herd of cattle.