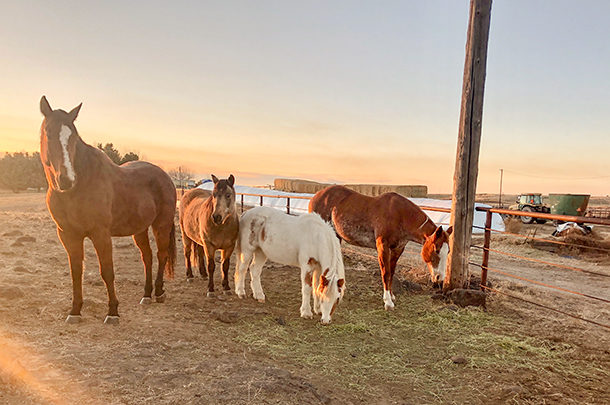 The horses are out: Part one

As a child, that statement encompassed a whole range of possible situations. Not only were the horses “out,” they were out on the highway, in the middle of the night, when my dad was on a hunting trip. My mom, who doesn’t know the correct end of a halter, is shaking me awake, repeating the statement until I gain some sense of coherency. The horses being out was a rather regular occurrence growing up. Maybe it was our fences, maybe it was our horses, but it was probably us. I remember having a tendency to disregard gates and their locking mechanisms.

As an adult horse owner, that statement brings out a whole range of emotions. First is anger, “Who was the idiot who left the gate unlatched?” Second is nonchalance, “They are probably just over the way on the other side of the pasture.” Third is practicality, “Did you call the sheriff? If they’ve been out long, someone has probably seen them.” Fourth is panic, “If they’ve been out that long, they are probably 20 miles out to the desert by now and maybe even dead.” Fifth is nearing hysteria, “If we don’t find these horses, what will I tell the girls? This is going to break their hearts. I am a terrible parent and a worthless horse owner.”

Last week, all those thoughts ran through my head in the hours following the frantic yell from the backdoor, “The horses are out.” In this case, the horses weren’t just out, they were also missing. From what we later learned from a Facebook post, they had been out for more than 24 hours. Apparently, it is not just childhood me who disregards locking mechanisms on gates. My ever-vigilant spouse, Craig, who censures everyone else for their failure to close a gate, left the horses’ gate unlatched.

Fortunately, several hours searching where Craig channeled his inner Captain Woodrow Call, the horses were found, caught and returned to their pasture.

As we loaded the horses up in the trailer, (they were a little over a mile away) I saw a smug expression on our pony Trixie’s face. This expression made me imagine what really went on in that 24-hour period. What were those horses up to? In order to understand these imaginings, you need to know a little bit more about these horses.

After their evening meal, the four horses prepared to settle in for the night, each finding a spot to claim. It was just getting dark, and Bud, the only one ridden that day, was ready for some shut-eye; he snorted at the ponies to quit pacing. As always, Flash was following Trixie, waiting to see where she settled in. At Bud’s admonition, he turned around to settle, and he bumped up against the gate. He noticed it was unlatched.

“Golly, Trixie, check this out! Our human left the gate open.”

Trixie walked over and pushed against the gate with her nose. “You are right. What a find.” With a thoughtful expression she said, “Flash, I think it’s time for an adventure.”

At that, Reba perked up her ears and trotted over to check out the situation. Assessing the open gate, she thought, “I could run, actually run. I’d be free.” She’d been cooped up for two months with a sore hoof, but, according to her, it was pretty much better. She was out of the pasture before Trixie could jostle Bud awake.

“Are you coming Buddy?” Trixie nuzzled Bud. Always the careful one, he acknowledged the situation but balked at the plan. Bud said, “Maybe we should think this through, what good would it really do us to leave? What do you actually intend to accomplish with this kind of escapade?”

“Come on Buddy, we need your good sense out there. We aren’t leaving forever.”

“Come if you like, but I am not waiting around.”

Interested in impressing the pretty, but aloof Reba, Bud complied, following the ponies out of the gate.

“Where should we go first, guys?” Flash asked. “I’ve got a notion to see the view; let’s head toward the rock pile.”

“The rock pile? This entire place is one big rock pile. I intend to get out of this place altogether. There are greener pastures than this place,” said Reba.

“Now get off your high horse Reba. Let’s run.”

With Trixie in the lead, the horses took off. Poor little, short-legged Flash struggled to keep up – “Hey guys, wait for me.”

PHOTO: The fugitives themselves, with the “people pleaser” right out front. Photo provided by Erica Louder.