This month’s VAS DC305 tip is on parlor performance. Using the parlor performance reports in DC305 can help you take advantage of the benefits of daily milk meters, plus look for cows that fail to produce the expected amount of milk. This data will help you:

Please note the data for this information will vary from one meter manufacturer to another.

There are two parlor performance reports in DC305, one from the MILK command and one from the PARLOR command. While they are very similar, there are two major differences. MILK parlor performance is from the standpoint of the cows and where they are located in their pens in DC305, while PARLOR is by pens in the presumed order they were milked. The second difference is the MILK report lists errors and problems with the milkings, while the PARLOR report lists errors of cows found in wrong pens during milking. For this article we will be looking at the PARLOR report.

The summary is of one milking (see Figure 1). Since this is a PARLOR report, the pens are as the cows were milked in the parlor and the “cows” column may better be described as the number of milk weights from the milking. Even if the cows were not identified, but the system knew they were there, they will be counted. Most of the columns are self-explanatory, but a couple that need explanation are “deviation” and “not ID.” 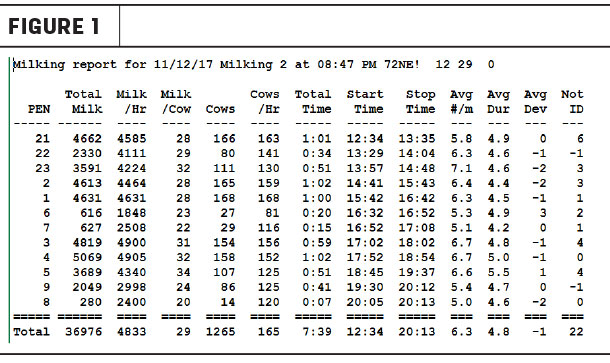 The “deviation” is the average deviation from expected milk. The “not ID” is the number from each pen that did not ID when they came in the parlor. A negative number indicates that more cows were milked in that pen than what DC305 has. This is usually due to mixed up cows. The summary portion of the report is very helpful to monitor milker performance. Look at start times for consistency, length of milking or negative not ID for the number in wrong pens, total production per pen and average duration. Average duration goals are for the first 25 pounds, four minutes or less, and for each additional 10 pounds, a half-minute or less.

Meter function (see Figure 3) is a very important section, which can let you know a meter is not working correctly before you would normally recognize it. This section will show any stall that was out of tolerance for that milking. If you are seeing the same stall each milking, attention is needed. It shows the stall only if it is out of tolerance. In Figure 3, you will see that stall three is flagged for time, mode and MDet (manual detect). Looking at the MDet of 29, which is out of the tolerance of 14, indicates a meter that needs to be looked at for malfunctioning.

Click on the images below to view them in more detail. 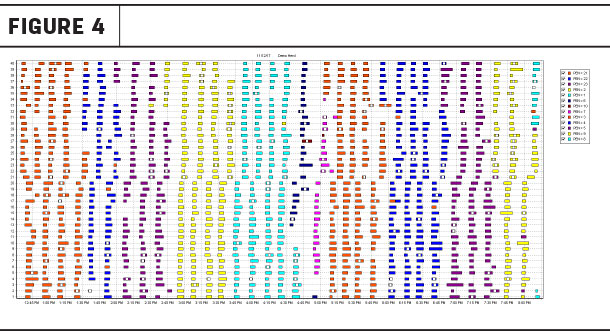 PARLOR also has a very useful graph (see Figure 4), which allows you to see a very good overall picture of what is happening in the parlor at a glance. The left side of the graph is the stalls, and the bottom of the graph is the times. Each box is a cow. You are able to see how milkers are being attached, how long each cow is being milked by the length of the box, if cows are in wrong pens by mix colors, reattachments – which are the white boxes – and by hovering over any box, see all the detail for that cow. 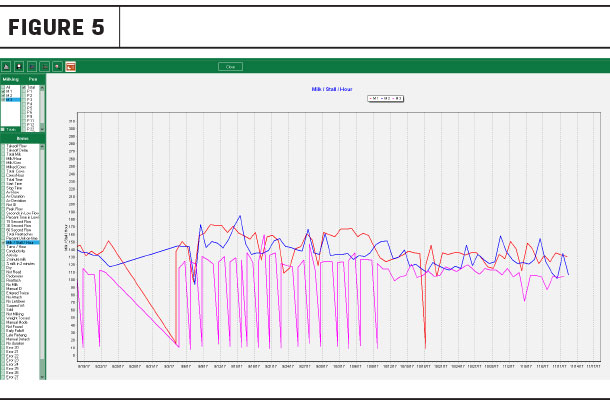 You are also able to look at historical milk data, back as long as you have had DairyComp and Daily Milk. You will see in Figure 5 a graph showing the pounds of milk per stall per hour. You will see I have chosen to see it by milking. Milking 1 and milking 2 are looking good at over 100 pounds per stall per hour. Milking 3 actually is having times of very low production. This is something that would be a red flag and needs to be investigated as to why. See how Figure 6 is more consistent on all three milkings? 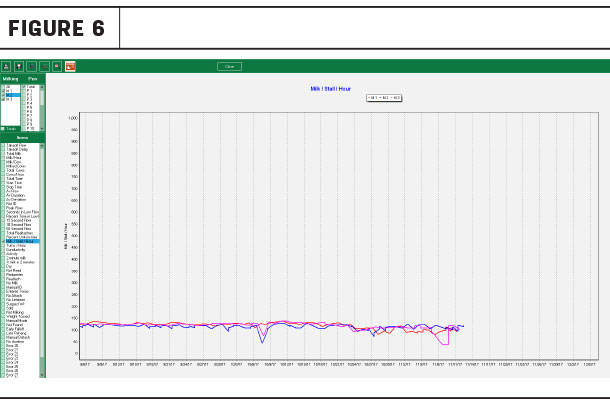