Milking equipment changes that made an impact on throughput

Karen Lee
The definition of efficiency is “the ability to do something or produce something without wasting materials, time or energy.” Upgrading milking equipment – whether adding a new element to an existing system or an entirely new parlor – is one way to make efficiency gains. This article looks specifically at methods used by three farms to milk more cows in a day.
Karen Lee

Five years ago, the Benthem family in McBain, Michigan, maxed out the capabilities of their double-12 herringbone parlor. Benthem Brothers Dairy had grown from 30 cows in 1981 – when brothers Doug and Bruce took over the operation from their parents – to 1,200 cows being milked twice a day.

With the next generation, including Doug’s son Jason and Bruce’s sons Ryan and Kyle, wanting to continue the farm’s growth, they decided to install a Waikato Milking Systems 60-stall rotary parlor.

It started operation in November 2016, and Ryan Benthem says, “We’re really happy with it.” He adds, “It allowed us to reach our full potential on milk production.”

Milk production is at 100 pounds, and with the help of their nutritionist, they’ve increased components to 4.0 fat and 3.2 protein. Milk quality has also improved, and the farm is consistently at 80,000 to 100,000 somatic cell count.

The parlor is equipped with automated pre- and post-dip sprayers and Waikato’s SmartD-Tect system that automates teat stimulation and udder health detection. When cows enter the parlor, an automated arm sprays all four teats. One person wipes the teats and another attaches the milking unit.

During the pre-milking phase, the pulsator milks each quarter separately, stimulating the udder for milk letdown and forestripping to test individual quarters for abnormal milk through conductivity. “It pulsates each quarter for 15 seconds exactly, which results in really good milk letdown and milking time,” Benthem says.

The parlor could function with only two people, but the Benthems prefer three. “We want an extra person to keep everything clean and running smooth[ly],” he says. With greater capacity and automated equipment, they are now milking 2,650 cows three times a day, more than doubling the herd size and adding an extra milking as well. “It really helped on labor efficiency. We can milk a lot of cows with three people,” Benthem says. The rotary is also easier for cow flow in and out of the parlor, as the cows move one at a time. 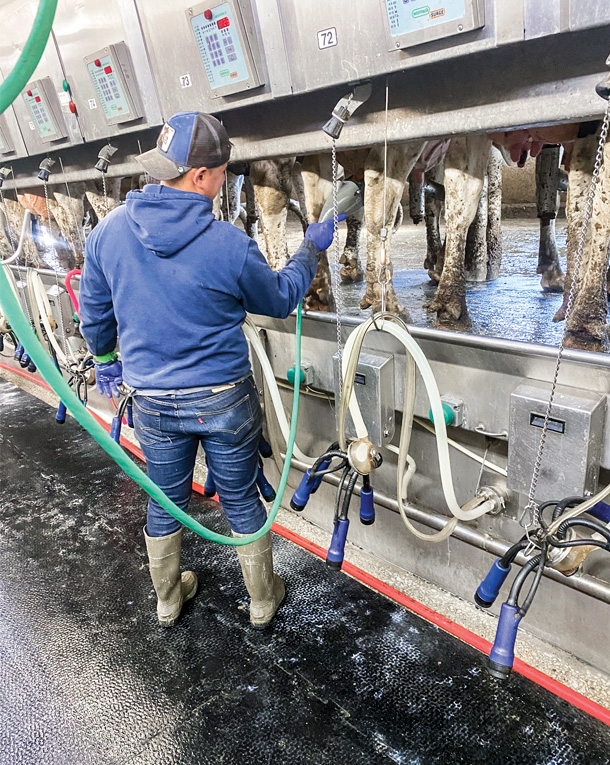 Lake Breeze Dairy in Malone, Wisconsin, is milking 3,000 cows in a double-44 parallel parlor three times a day. It is one of three dairies owned by Breeze Dairy Group, and it recently installed the FutureCow prep system from GEA, after seeing it perform well on their other two dairies. They switched from pre-dipping and wiping with towels to this handheld mechanical brush unit that washes, disinfects, stimulates and dries all in one visit to the cow.

“It’s easier on the guys milking cows,” says David Mulder, herd manager at Lake Breeze Dairy. They have four people milking in the parlor and one person bringing up the next pen of cows. The eight main-lactating pens, along with the post-fresh pens, are milked in an eight-hour shift.

“We would launder towels after every pen, and lugging towels around eats up time,” he says. With less time doing laundry, Mulder reports they are milking 50 more cows through the parlor.

They started using the prep system the first week in January and have noticed a slight increase in milk letdown. “We’ve maintained or slightly improved milk quality,” he adds. Mulder anticipates an improvement in teat end health, especially once they have used it for an entire winter.

It took a couple of weeks for training and to get conditioned to holding the brush. Now that the milking crew is used to using it, he says they like it better than the dip and towels. “It’s less taxing on the wrist,” Mulder says. “They’re very happy with it, and we’re happy to not do all the laundry.” 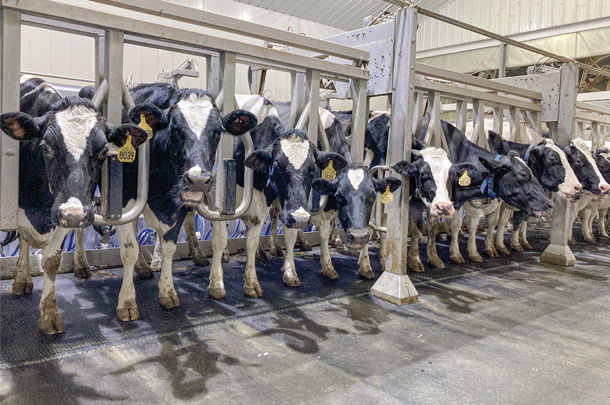 Three years ago, the Johnson family at Highland Dairy in Glade Spring, Virginia, determined it was time to replace the double-12 herringbone parlor they’d been using for 40 years. They kept their same dealer for proximity and the good job they did servicing the previous parlor, but they decided to take a chance on a new parallel parlor model being released by DeLaval. “We liked the changes they said they were making [in the new parlor design] and signed up to be a pilot farm,” says Rena Johnson.

She focuses on the dairy and milk cows, while her father, Dave, takes care of the farm and business tasks; her mother, Jo, looks over the calves and maternity cows, and her brother-in-law, Wes Payne, works with crops and machinery. They also have 11 employees.

In January 2019, they started using the new double-16 P500 parallel parlor. “It’s really cow friendly,” Johnson says. “The stall design is comfortable for them with plenty of room to stand.”

The open-bottom neck rail promotes better cow flow and indexing. In addition, sequence gates can be lifted during milking to provide more space for cows standing together. When it is time to exit, the gates come around behind the cows. “The cows are well-trained; when the neck rail goes up, they know they need to exit,” Johnson says. The parlor is set up to manage different groups. All 16 cows can be released at once, or they can release in gangs of four cows.

Johnson prefers the take-off chains on the milking units compared to the metal arms in the old parlor. With added space and fewer obstructions, she says there is less opportunity for fresh cows to get themselves into trouble.

The parlor has improved lighting and is quieter, with equipment located in a basement. This calmer environment also seems to put fresh cows at ease. “The guys milking like it too,” Johnson says. They have two milkers per shift and one person bringing in cows, raking stalls and flushing the barn.

In total, there are six full-time and two part-time milkers that have been at the farm a long time and helped transition from the old to the new parlor. “Everybody is much happier now than in the old barn,” she says.

Today, they can milk 600 cows in five-and-a-half hours, three times a day. In the old parlor, they were only able to do a modified 2X-milking (milking half the herd twice and the other half three times) with nine hours per milking. “It really sped the process up,” Johnson says.

She can monitor milk flow and says they are getting good letdown and milk out. The farm recently received an award from their co-op for excellent milk quality.

Initially, they saw a 5-pound increase on the herd average. It dropped a bit due to some issues with feed quality, but the cows are now producing more than ever compared to the previous barn, Johnson reports. She attributes it to the cows being calmer and more comfortable during milking and through the whole day.

In addition to the parlor, they installed a sort gate to separate cows needing attention. The previous routine was to set the headlocks at the feedbunk, but now most of the cows can go about eating and laying down while the sorted few are tended.

By improving the efficiency of their milking equipment, each of these farms is milking more cows in less time with the same amount of labor.

PHOTO 3: The open-bottom neck rail and movable sequence gates make it easier for cows to enter and exit the parallel parlor at Highland Dairy in Virginia. Photo courtesy of Highland Dairy.