Family at center of Benthem Brothers’ commitment to quality

Dave Natzke
Like the stories of many Midwest dairy farm families, the Benthems’ history is one of steady growth and improvement, focused on quality while adopting technology, with family at the center of the circle and a vision of creating room in the business for future generations. Benthem Brothers Inc. of McBain, Michigan, was featured in a virtual tour during the 2018 World Dairy Expo.
Dave Natzke

The dairy farm was started by Edwin and Trina Benthem in the 1940s, and the family commitment to quality is in its eighth decade. Their sons, Bruce and Doug, took over the farm in 1981, creating Benthem Brothers Dairy, with 30 cows. Bruce oversaw crops, while Doug was in charge of the dairy.

A neighbor’s farm became available in 1992, and with it, the brothers went from 30 cows to about 150, milking in a double-eight parlor. Doug’s son, Jason, returned to the farm in 1994, taking over herd management.

In 2002, a remodeling and expansion project converted the parlor to a double-12 herringbone and added a 200-cow freestall barn. When a close friend and neighbor passed away in 2004, the Benthems purchased that farm, adding land base and a facility for heifers.

Ryan Benthem, Bruce’s son who joined the family business in 2006, called the early 2000s “the turning point on the dairy side. We were able to convert to sand bedding, which really improved cow health and the quality of milk.”

To optimize returns from the land base and facilities, the Benthems decided to terminate a dairy steer enterprise and started selling all bull calves shortly after birth – making more room for heifers and cows. The herd grew from 300 to 600 cows. 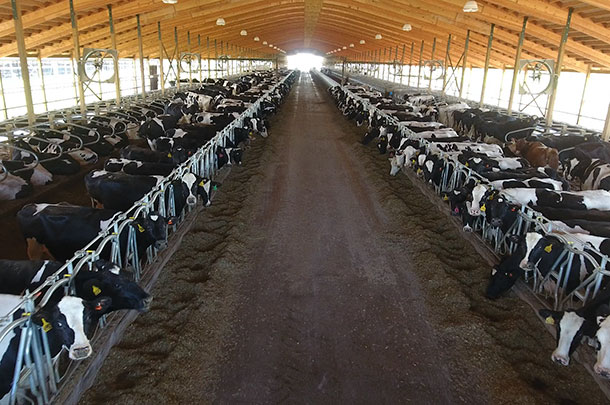 In 2011, they built a third freestall barn and grew to 800 cows. With escalating commodity prices, the Benthems also invested in tiling and center pivot irrigation to improve crop production and maximize yields.

By 2016, they we were milking 1,200 cows around the clock. With the milking center at maximum capacity, the Benthems began to explore parlor options.

They milked in the new rotary parlor in November 2016. Initial challenges included training 2,000 cows that had never seen anything other than a herringbone parlor. With help from neighbors and additional staff, the herd was fully acclimated within about week.

“Overstaffed is better than being understaffed,” Ryan said of the training process. “It’s hard work, and you get to a point where you’re tired.”

The Benthems’ story continues to evolve. In 2017, Ryan’s younger brother, Kyle, came back to the farm, adding focus to the crop side and assisting with herd health.

In 2018, they had the option to purchase the original Benthem homestead farm, which had been in the family since the 1880s. The purchase of 700 acres (half irrigated) added land base and also brought the family’s history full circle.

Ryan also credits the farm’s employees for the family’s success. “We have great employees we rely on every day, and that helps make our job a lot easier,” he said. 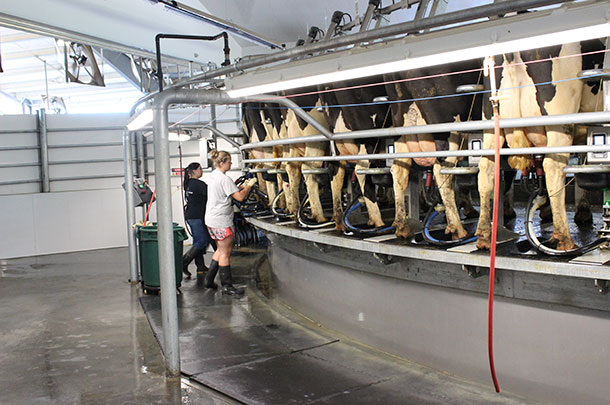 The parlor’s composite platform is formed in a multilayer laminated process in New Zealand and is approximately 75 percent lighter than traditional concrete. It’s shipped to the U.S. in modular deck sections. The Benthems’ parlor was installed by Waikato Milking Systems specialists, with support from Ryan Vanderwal of Premium Farm Solutions, Lake City, Michigan, and Waikato Milking System’s U.S. sales and administrative team, based in Madison, Wisconsin.

While optimizing labor, parlor technology adds to the system’s management capabilities. The 60-stall rotary can be operated by two people – one person wiping cows and one attaching milking units – with minimal steps.

The emphasis on management and technology has paid dividends in the quality of milk, which is marketed through the Michigan Milk Producers Association (MMPA). They’ve maintained a somatic cell count (SCC) of 90,000 over the past couple of years, earning them an MMPA Gold Quality Milk Award last year. The milk is sold to Superior Dairy in Ohio, and goes to fluid markets.

A CowManager system monitors rumen and cow activity, and RFID tags and sort gates have helped cut about six man-hours per day from finding and locking up cows for breeding and health protocols, making labor more efficient and producing less stress on the cows.

To optimize productivity, all cows going through the rotary produce saleable milk; the Benthems use the old double-12 herringbone for hospital and fresh cows. That milk is pasteurized and fed at a rate of 3 quarts per day to calves. They have about 185 calves on milk at any given time.

Calves are on full milk for about 60 days and are then cut back to once-a-day feeding for about a week, moving into a transition pen where they receive pellets.

Heifers are moved at 10 months of age to a custom raiser. The top tier of heifers are bred the first two times to sexed semen, the third time conventional. Others are bred to beef.

“We’re trying to get a better return on calves; beef calves getting a higher price at birth,” Ryan said.

Bred heifers come back to the farm three months before calving. 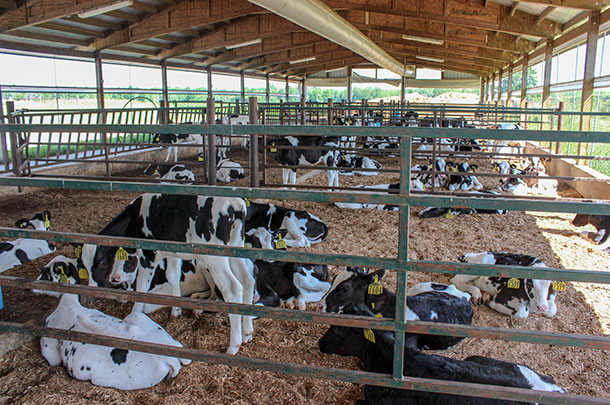 Looking ahead, the family continues to look for improvement and efficiencies in every enterprise, seeking to enhance current assets. “It’s been a challenging economic environment in Michigan the past couple of years, so we’re looking for ways to be more efficient,” Ryan said.

They’re maximizing crop yields through nutrient management, extending the cropping season by tiling – which enables them to get on the fields earlier in spring and get crops off the fields in fall – and center pivots, which helped double the crop yields they would have seen in the dry year of 2018 without irrigation. Benthem Brothers also utilizes a custom forage harvester to maximize yields and forage quality.

And the Benthems are striving to boost the genetic potential of the herd and strive for the highest quality cows and milk. To maximize productivity of the new rotary, the Benthems had purchased a lot of first-calf heifers. In a near-continuous growth phase, the culling rate was running at about 20 percent.

Now, with milk harvest running at peak efficiency, they are devoting additional attention to the quality of the dairy herd through more aggressive culling and emphasis on genetics in breeding. With a surplus of heifer calves, they keep calves from the top 75 percent of the herd, selling calves from the bottom 25 percent at birth.

“We’re striving to improve the genetics of the herd and cut heifer-raising costs,” Ryan said. “We don’t need to keep all our replacements, so we’re striving to retain only the number of heifers we need.”

The Benthems are active in their community and church, with an emphasis on mentoring youth through participation in the Big Brothers Big Sisters program and coaching youth basketball.

PHOTO 1: The Benthems began milking in the rotary parlor – at the time just the third Waikato Milking Systems Centrus Composite rotary parlor installed in the U.S. – in November 2016.

PHOTO 2: With milk harvest running at peak efficiency, the Benthems are devoting additional attention to the quality of the dairy herd through more aggressive culling and emphasis on genetics in breeding. With a surplus of heifer calves, they keep calves from the top 75 percent of the herd, selling calves from the bottom 25 percent at birth.

PHOTO 3: The 60-stall rotary can be operated by two people – one person wiping cows and one attaching milking units – with minimal steps.

PHOTO 4: The Benthems have about 185 calves on milk at any given time. Calves are on full milk – pasteurized from fresh and hospital cows – for about 60 days. Photos courtesy of Waikato Milking Systems.