Michael F. Hutjens
Lameness continues to increase on dairy farms as more tools are available to monitor and evaluate, consumer groups raise lameness as an animal welfare issue, and cost of treatment can be $498. Lameness is a major risk for culling after mastitis and reproductive failure.
Michael F. Hutjens

(Lameness can be a factor leading to lower fertility also.) Figure 1 illustrates the cows’ environment, along with feeding, can have impact on lameness incidence depending where the diagonal line appears on your dairy farm. 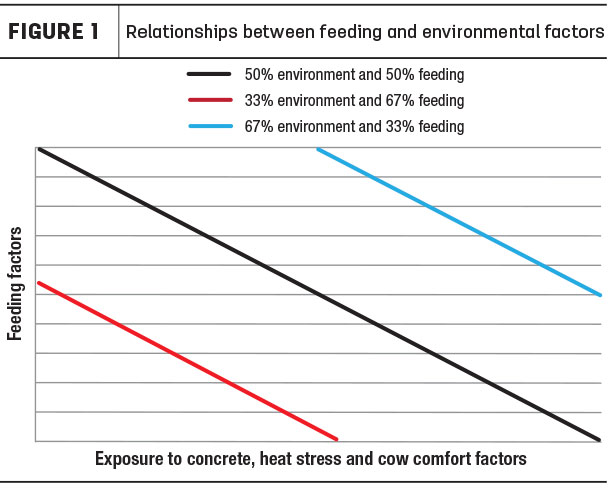 Laminitis is an inflammation in the hoof area causing disrupted blood flow to the corium. Inflammation of the laminae can compromise blood supply and nutrient delivery to the keratin-producing cells that affect horn tissue quality. Potential causes of laminitis can be found in research reports and field observations.

Nutritional factors should be considered when focusing on lameness on farms. These factors along with recommended guidelines for each nutrient or feeding concern are listed below:

A suboptimal transition program can lead to rumen acidosis and risks, as dry cows consuming high-fiber rations are moved to rations containing higher levels of grain and less forage. This can lead to hoof disorders observed 100 days after calving. Physically effective fiber maintains a rumen forage raft to optimize rate of passage and normal rumination (over 500 to 600 minutes of cud chewing activity per day). Rumen pH should be maintained above 6.0 related to saliva production rich in sodium bicarbonate. Five pounds of forage particles over 0.75 inch, 21 percent forage neutral detergent fiber (NDF) or 19 to 21 percent effective NDF are suggested minimum levels.

Recommendation: Rumination collars to measure on-farm cud chewing time and the Penn State particle box to evaluate feed particle size can both be effective tools to use on dairy farms to evaluate effective fiber.

Recommendation: Keep total ration ether extract below 6 percent of the ration DM and balance sources of added fats and oils.

Copper is needed for synthesis and maintenance of elastic tissue such as tendons. Copper can affect the claw by increasing the production of a copper enzyme, thiol oxidase, increasing hoof hardness through disulfate bonds in keratin. Immunity and antioxidant activity by superoxide dismutase need copper for cell membrane protection. Cattle deficient in copper are more susceptible to heel, foot rot and sole abscesses.

Recommendation: Suggested level of total copper in the ration DM is 10 to 15 parts per million (ppm) (one-third from organic copper sources).

Manganese is needed for normal bone density and joint structure. It is required for chondroitin sulfate synthesis in its role in joint cartilage. Manganese has a role as a superoxide scavenger, decreasing free radicals that can lead to oxidative damage.

Recommendation: Suggested level of manganese is 40 to 60 ppm with one-third from organic sources.

Recommendation: Suggested levels of total sulfur is 0.25 to 0.28 percent in the total ration DM.

Vitamin A is important for epithelial skin and bone health. A deficiency can result in inflammation of the coronary band of the hoof.

Recommendation: Suggested supplemental levels of vitamin A range from 75,000 to 100,000 international unit (IU) per cow per day.

Biotin is needed for keratin formation and claw horn development, leading to foot disorders during deficiencies in cattle and horses. Biotin can increase milk yield by 4 pounds. Milk production increases were not related to hoof improvement due to the immediate milk response.

Recommendation: Suggested levels of sodium bicarbonate or sodium sesquicarbonate are 0.75 percent of total ration DM. Potassium and sodium buffers are added to raise the dietary cation-anion balance to a positive 400-plus milliequivalent (meq) per kilogram during heat stress.

Direct-fed microbial (DFM) or probiotics include yeast products and live bacteria that can reduce lactic acid levels in the rumen, increase fiber digestion or stabilize the rumen environment.

Monensin reduces lactic acid levels in the rumen while lowering ketosis risk in transition cows that can maintain feed intake and meet nutrient needs. Monensin can also lead to smaller and more meals per day that reduce shifts in the rumen environment based on feedlot data.

Recommendation: Add 300 to 400 milligrams per cow per day.

Body condition scores (BCS) are positive associated with digital cushion thickness (DCT), which can provide cushion to the hoof support structure. Cows with the highest DCT score/thickness had 15 percent lower lameness score compared to the lowest-DCT-scored cows. The DCT continued to drop after parturition, reaching the lowest level at 120 days after calving.

Recommendation: Monitor changes in BCS after calving, minimizing BCS losses to less than 0.5 point (on a 1-to-5 scale).

Heat stress can lead to a drop in rumen pH values by 0.2 point (for example from pH 6.0 to 5.8 units) as cows experience respiratory acidosis and a drop in blood carbon dioxide and bicarbonate. Cow responses to heat stress include lower and variable DMI due to heat stress, a decrease in rumination as cows may be panting, more sorting of feed and shift of blood flow to the surface area of the cow for heat transfer.

Recommendations: Dairy managers may shift ration ingredients, increasing concentrate feeding, lower forage and fiber levels, and added fats/oils that can affect rumen fermentation. Increasing the dietary cation - anion difference (DCAD) to over 400-plus meq per kilogram of ration DM can be effective.