Create a profitable coexistence for wind energy and ranching

Ann and Jerry King took travel seriously. The original homesteaders of King Ranch, located a few miles west of Cheyenne, Wyoming, traveled to more than 80 countries during their lifetime, says Mark Eisele, who began working on the ranch as a hired hand when he was 15 years old, and now operates the ranch alongside his family.

Amy Schutte is a freelance writer in Idaho.

“The Kings would come back to the ranch after one of their trips and say, ‘We see wind farms everywhere we go, and we think it would be a great thing out here,’” Eisele says. “They were very well-educated, very smart, salt-of-the-earth producers, and they had a different philosophy than most.”

Wind, he says, has always been a major enemy, but the ability to turn it into profit is something Eisele and his family are proud to discuss.

“This idea seemed kind of bizarre 30 years ago, and it took us a long time to cultivate the right relationships with wind companies, but the cattle market goes up and down, and this brings some stability to it,” Eisele says.

The demand for renewable energy

America’s wind capacity will grow 60% over the next five years, according to a 2019 report by consultancy Wood Mackenzie. Each state’s Renewable Portfolio Standards (RPS) requires a percentage of the electricity utilities procure come from renewable resources, and while most states’ requirement targets are around 10%-14%, a growing number of states have set their renewable energy goals at 50% or greater, driving the nation’s $64 billion market for wind, solar and other renewable energy sources, creating a market that’s ripe for wind development.

And the turbines have to go somewhere.

But where? Towering over the landscape anywhere from 300 to 450-plus feet, depending on the model, wind turbines need to be near transmission lines, away from populated areas and in a place with commercially viable wind.

The process to approve and commission a wind farm can be long. One to two years of meteorological evaluation tower (MET) data is required to assess wind quality and consistency. Environmental impact studies must be performed, and, depending on whether the wind farm is on public or private land, stakeholders need to have their say.

Keith and Lois Broyles, Wyoming ranchers and owners of KB Energy LLC, which offers MET-related services for wind developers and landowners, own land where turbines have been in use for 20 years. The older technology required 69 turbines to be spread out across the area, but they are currently being taken down and replaced with 12 new turbines. The rest of the land will be reclaimed to its former state.

“I don’t have anything negative to say about it,” says Lois, the land’s fifth-generation rancher. “It’s been a very good thing for my family. The positive financials have been a big thing, and the local community sees a real benefit from the tax revenue.”

As technology has advanced quickly over the past decade, the ability to transfer and store energy created from wind gives states another export commodity, bringing well-paid jobs and a boost to local economies. The Broyles point to their local fire department and say towns 20 miles away have benefited from the revenue.

The Broyles are passionate about both ranching and wind, traveling across the globe to put up measurement towers, although they like to stay closer to home – not a challenging task when wind projects are popping up in locations across Texas, Arizona, New Mexico and Idaho.

“There are a ton of projects going in,” Keith says. “Coal is still king and always has been in Wyoming, but there has to be a mix. These wind turbines are coming in fast. There needs to be understanding from the governmental side and smart development of these projects, so they pick the right location.”

At first glance, Wyoming seems like the perfect place to harness ferocious winds that often top the charts at 80 miles per hour, but as wind energy development marches across the country, communities are often weighing whether the perks of wind development are bigger than its potential downfalls.

“Not every location is a good fit,” Keith says. “Laramie has great wind, but that’s a community that can’t stand it. They like their viewshed, so wind farms can’t get traction,” Keith says.

Besides an altered vista, the Broyles say the impact to their ranch for the past 20 years has been minimal.

“We’ve never had anything affect the health of the herd,” Lois says. “Whenever we do a preg check, they are consistent across the herd and in different pastures. Cattle adapt very easily. Objections come from people who don’t truly understand cattle.”

Fifth-generation rancher Todd Heward was born and raised in Shirley Basin, Wyoming, where his family homesteaded their ranch in 1909. It’s a legacy operation – one his children will carry on.

Developers approached Heward several times over the years, but he waited until a larger ranching neighbor was approached at the same time to move forward with the construction of 22 turbines.

“We were building some corrals at my great-great grandmother’s homestead, and I made the comment that it was a much different view than when she was there,” he says. “It’s been a big adjustment. It’s difficult to have to look at them, but we have to get used to it as best as we can. It’s unfortunate really, but it’s a reality.”

But what Heward has given up in landscape on his ranch, he’s gained back in other ways.

“Economically, it’s beneficial,” he says. “It provides an opportunity for the next generation to come back in a larger fashion. The ability to give to the community and provide opportunities for other people to come to the ranch and enjoy it – we do that anyway with hunting, fishing and public access, but it gives us an opportunity to do more of that.”

The extra roads are nice, and he says his cattle and the wildlife don’t seem to care about the turbines. Cattle graze underneath the tall towers and follow their shade during the day. 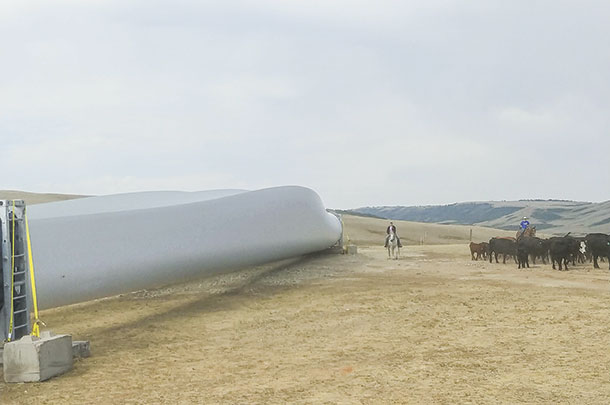 Both Eisele and Heward point to a broader vision when it comes to hosting wind turbines on their land. They are glad of the ability to purchase needed equipment, access better roads and keep their family on the ranch.

“It’s given us stability. It’s made it easier. I get to work with my family every day, and that’s a pretty special thing. Ranching ends up being easier, sometimes fun, maybe profitable,” Eisele jokes. “You have to have a longer vision and understand this is a temporary transformation – maybe 20 or 30 years. That reclamation and decommissioning plan is critical, so if your family doesn’t want it to keep going when the contract is up, it can all be taken down.”

“This is not a long-term thing, so we want to invest some of the income to provide longevity to the ranch,” he says. “We made sure there was language for reclamation if that happens. Technology is changing, so our contract makes it possible to extend further on, or it could be completely gone in 10 to 15 years, so we don’t want to build a ranch that is dependent on this income.”

Eisele, Heward and the Broyles are quick to offer similar advice to ranchers who have been approached by a wind developer:

1. If possible, move your cattle to another pasture during the construction phase. Eisele says the first year of construction can be overwhelming. “Roads are going to be built. Heavy equipment is coming through. Send the cows somewhere else for the duration of the construction, if you can. That’s the most difficult part for some people, and it can be painful upfront, but if you can get past that, then things are almost negligible because the crews that maintain the turbines are minimal, and they tread lightly.”

2. Invest in good legal counsel – someone who specializes in wind development to negotiate your needs regarding roads, pipelines and cattle guards, and make sure the reclamation plan is solid.

“The industry as a whole has come a long way,” Heward says. “They’ve narrowed down an investment window that’s ideal for the developer and the landowner. It’s all the other things – fences, roads, hunting, timing of when things happen. Ranchers should make sure their needs are being met.”

3. For grazing management, develop solid communicative relationships with the Bureau of Land Management and the wind developers. “Educate yourself. Come to the meetings prepared and do your own homework,” Lois says. “Not to get ammunition, but to broaden your knowledge of an industry that has really come a long way and has a lot to offer ranchers and communities.”

PHOTO 1: The Broyles’ ranch sandwiches state and Bureau of Land Management land, where turbines have been in place for 20 years.

Amy Schutte is a freelance writer based in southern Idaho.

Since that time, Ritchie Industries has developed into the leader in watering innovation and now manufactures a complete line of livestock and horse waterers to the highest specifications in the industry. Automatic waterers are our focus and o...