I swear, I never really got the hang of long division after that.

Similarly, I feel like we in the livestock agriculture world have asked the general public to accept some “truths” about rangelands, pastures and grazing animals, but we have failed miserably in explaining those concepts. Most of the time, we just skip over the explanation entirely – I suspect because many of us are not confident and knowledgeable in the relationships and processes of the grazing animal and plant dynamic. Heck, some of us are still trying to figure out long division.

Yet we wonder why so many do not “get” the general concepts and view our proclamations as “fake news.” “Rangelands evolved with grazing animals,” we told the Cattle Free by ’93 folks. “These lands benefit from grazing livestock” is a common theme when confronted with those who believe locking all animals off the land would result in restoration of the landscape to some fictional, previous and magical state of being. Livestock are often portrayed as the villain, damaging the landscape. How can we help our fellow land stewards and the public understand, appreciate and celebrate the relationships between grazing animals and plant communities?

Back to the basics

We need to explain “why.” Why grazing animals are key to healthy rangeland and pasture ecosystems. And how those relationships work. Too often, we start with the factual statement that grazing animals evolved with rangeland and pasture landscapes. That is the “what.” It is a fact for sure, but to capture the attention of the naïve land steward or the general public, we need to begin the conversation with the “why,” explain the “how,” and they will then get the “what.”

Let’s begin with the basics. Grass grows. It puts up leaves and, eventually, seedheads each year. At the same time, it is putting down roots to draw water and nutrients from the soil. We’ve all seen those photos of tall prairie grasses excavated so we can see the root mass or growth. It always amazes me, the sheer volume of roots.

Looking at Figure 1, you can see the root mass is large on the grass that is lightly grazed, smaller with more grazing pressure and very reduced when exposed to continual and extreme grazing pressure. 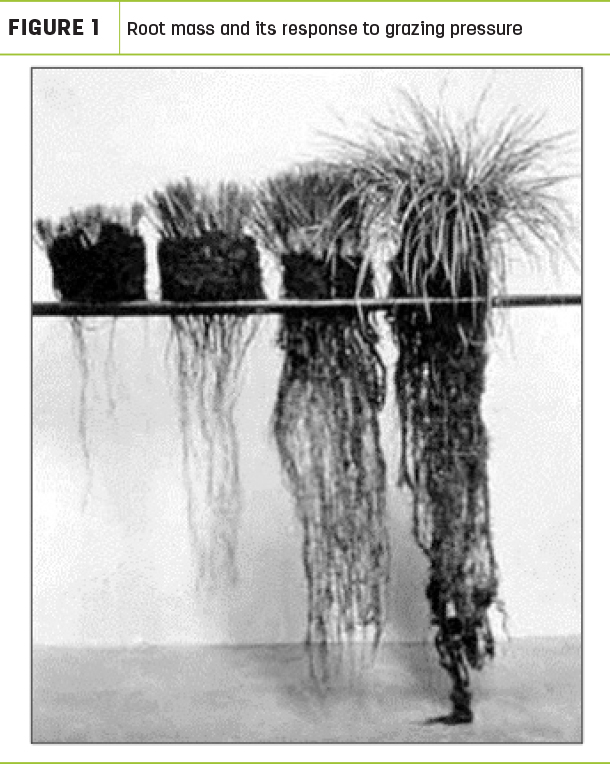 Grass is a firm practitioner of the old “survival of the fittest” axiom. How does it ensure survival in tough times? By making seeds. That’s how you wind up with the perennial grass with a small root mass: continual and excessive grazing pressure.

When a grazing animal takes a bite of a grass plant, given that it is not overutilized, that grazing action stimulates tillering. Tillering is when more leaves and shoots develop, making the plant leafier and more robust (more grass to graze). And along with more tillers, more roots develop. The root zones, even around the tiny hair-like roots we cannot see, develop relationships with soil mycorrhizal fungi and other microbes. This is the “herd” beneath the soil surface you hear soil health advocates refer to fondly. There are literally billions in a tablespoon of healthy soil. These little critters are powerful and can alter the soil in such a way that the plant roots can utilize nutrients that were previously unavailable, thereby benefiting the grassland production and nutrient cycling. Some rangeland grasses are better at these processes than others.

Without grazing animals, there is no relationship between the plants and the herd of soil fungi. Oh, I guess you could go out with some clippers and set out to “graze” your pastures and get a similar response. Given there’s over 100 million acres of range and pasture in Texas alone, relegating that chore to grazing animals seems far more practical.

Can you get too much of a good thing going? Oh yeah. Referring back to Figure 1, continuous heavy grazing pressure results in greatly reduced root mass. Which also results in less of those beneficial relationships going on in the soil, allowing the grasses to fully utilize the nutrients in the soil. And most importantly, leaves your rangeland less resilient. In times of drought, that root mass matters more than you might imagine. If you have kept the aboveground parts of the plant so short they are borrowing from the root reserves to stay alive, you are leaving nothing to carry the plant successfully through drought.

Too close to home

In 2013, I visited with a rancher I’d known for years. He had some wildfire damage he wanted me to quantify, as he was working with an oilfield company regarding damages. When we finished looking over the wildfire area, he said, “I want to take you to where the drought killed my grass.” “Oh, no. Here it comes,” I thought to myself. One of those incredibly difficult conversations where I will explain that the drought did not kill his grass – his continuous heavy grazing was to blame.

We approached a buffalograss/blue grama-dominated clay loam area. Cattle love those grasses and will camp there, grazing until there’s hardly any leaf structure left. Clearly, that had been happening for a long time. Digging up the now-dead grass would have revealed such small amounts of roots that it was apparent that when the mother of all droughts hit in 2011, drying the soil out and heating it up beyond what the shallow-rooted, beaten-down grasses could endure, the fate of the plants was sealed. 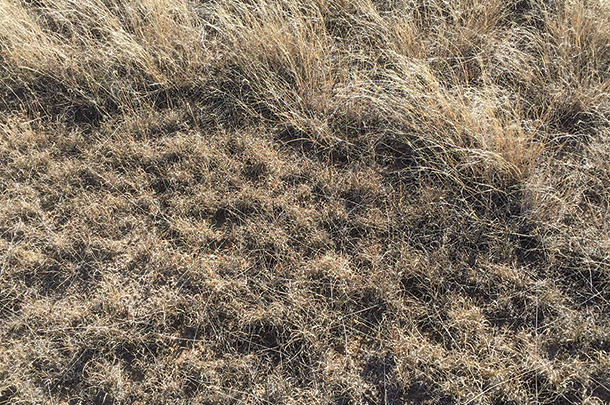 Large areas of buffalograss and blue grama were dead. I took a deep breath, wondered how far it was back to my vehicle if I had to walk, and explained to him why that grass was dead. To my surprise, he was quiet. Then he took a well-worn bandana out of his back pocket and dabbed at his eyes. “I shoulda known better, Jenny. I shoulda known better.” I count that as one of the most difficult conversations on the range I have ever had.

Healthy, resilient ranges and pastures need grazing like peanut butter needs jelly. The good Lord made it all work together. It’s magical, miraculous and mysterious. We need to be able to explain the “why,” the “how,” and then the world will accept the “what.” As I often end with: Grazing management is not rocket science. It is much more complicated.

PHOTO 1: They may not look like magicians, but they facilitate the magic that leads to healthy rangelands and profitable ranches.

PHOTO 2: Buffalograss and blue grama are selected by livestock as they are more palatable than the taller species in the photo: threeawn and sand dropseed. The resulting heavy, continuous grazing has left those grasses without sufficient root mass to survive drought and certainly compromised in their ability to provide enough leaf matter to feed livestock. Photos by Jenny Pluhar.