Likewise, the pace of non-fed cattle slaughter was higher on a weekday basis but lower on a Saturday basis. The preliminary estimated federally inspected cattle slaughter for November was up 5.4% from a year prior. According to the USDA Agricultural Marketing Service (AMS) Livestock Slaughter report, the actual slaughter for beef cows and dairy cows for the weeks of Nov. 1 through Nov. 27 were up 5.9% and 2.3% compared to a year earlier. More noteworthy was the increase in heifer slaughter, which was also up 3.8% during the weeks of Nov. 1 through Nov. 27 compared to a year earlier. As a result, minor adjustments were made to the fed cattle slaughter estimate based on current slaughter data. However, both steer and heifer carcass weights increased during November and are approaching 2020 levels. 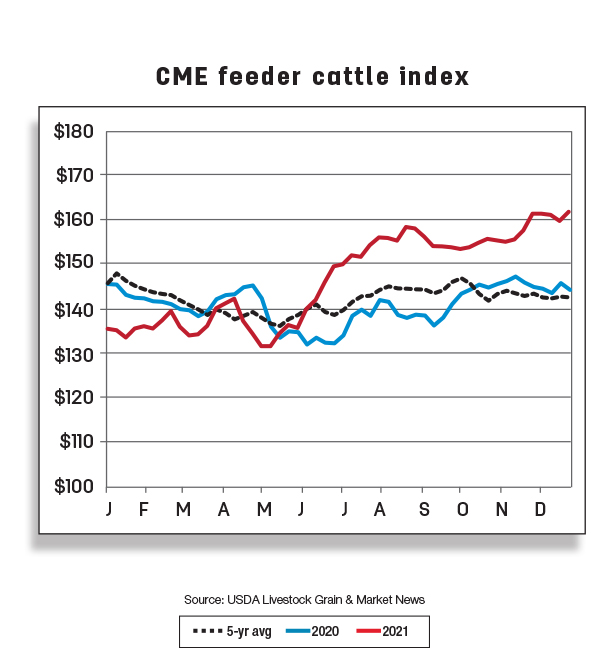 In November 2021, the average price for all grades of live steers sold in the 5-area marketing region was reported at $133.39 per hundredweight (cwt), $9.06 higher than the previous month’s average price and $24.54 above November’s 2020 average price per cwt. For the week ending Dec. 12, the fed steer price averaged $139.69 cwt, down 75 cents from the previous week’s price. The fourth-quarter price forecast for fed steer was raised $5 to $133 per cwt on continuing strength in beef demand and tight cattle supply. These conditions resulted in the 2021 annual forecast for fed steers being raised $1.25 to $122.56 from the previous month and the 2022 annual forecast raised $5 to $135 per cwt.

Beef imports up in October; 2021 and 2022 import forecasts raised

As Table 1 shows, year-to-date imports from Canada and Brazil have increased by 16% and 55%, respectively. 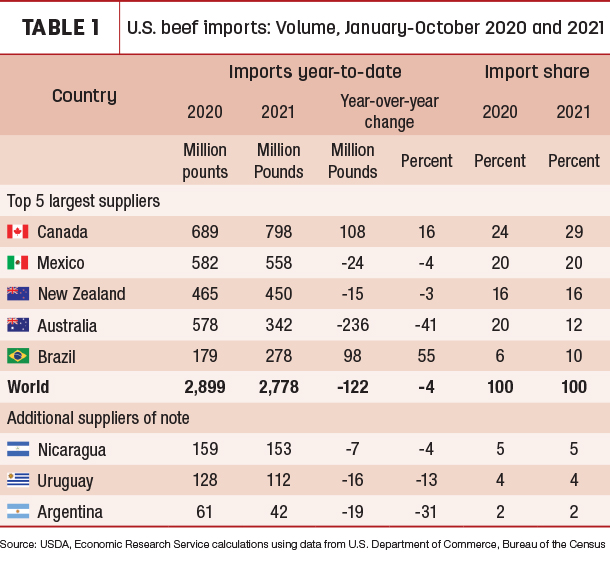 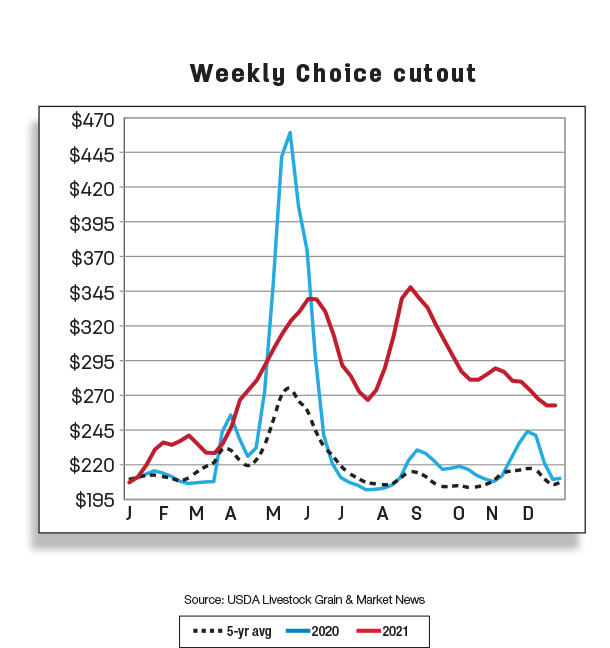 In October, U.S. beef exports were 281 million pounds, 9% above a year earlier and 11% above the five-year average. Among major destinations, larger year-over-year shipments to China, South Korea and Japan more than offset reduced exports to Hong Kong, Mexico, Canada and Taiwan. As Table 2 shows, cumulative exports for January to October reached 2.861 billion pounds, up almost 20% from a year prior and the five-year average. 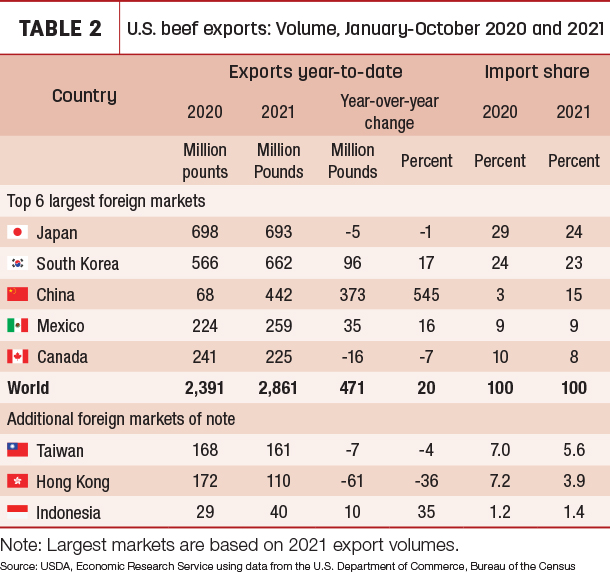 Exports to China reached over 47 million pounds in October and 442 million pounds year-to-date, exhibiting the largest year-over-year and year-to-date volume increase. Compared to the previous year, shipments to China soared, moving it from the seventh- to the third-largest export destination and nearly surpassing combined shipments to Mexico and Canada. This is largely a function of several ongoing factors, including changes to U.S. market access that were implemented in March 2020.

China’s demand for animal protein is expected to continue to support beef imports. U.S. beef shipments to South Korea set a record for October, and South Korea’s aggregate beef imports from the world through October remain at their highest recorded levels. During the same period, U.S. beef sales to Japan were 5% higher in October from the previous year, bringing year-to-date shipments almost to 2020 levels. 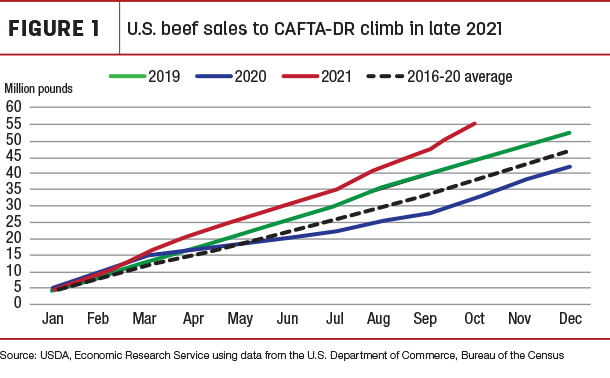 U.S. beef exports to member countries of the Dominican Republic-Central America Free Trade Agreement (CAFTA-DR) are at a record pace. The members consist of Costa Rica, Guatemala, Honduras, Nicaragua, El Salvador and the Dominican Republic (DR). Total beef exports year-to-date to these countries are up 69%, or 23 million pounds, from the previous year. Separately, exports achieved historic levels to Guatemala, Costa Rica, Honduras and El Salvador. The DR is typically the largest destination for U.S. beef in the region, but in 2021 Guatemala surpassed the DR by 22%, or almost 4 million pounds, despite the DR’s return to beef import levels pre-COVID-19.

Although U.S. exports to Mexico in October were down 13% from a year ago, year-to-date shipments are up 16%.