To offset the loss in slaughter capacity from the plant closure, Tyson Foods redirected those fed cattle scheduled for the Holcomb plant to other of its facilities. Further, beef plants would need to increase their Saturday slaughter levels to accommodate the additional supply volume.

In response to concerns about the impact of the fire on beef supplies ahead of the Labor Day holiday, buyers reacted by bidding up boxed-beef prices. At the same time, negotiated prices for fed cattle declined (see Figure 2) as the market adjusted to the reduction in slaughter capacity, and packers’ margins climbed sharply to record levels. 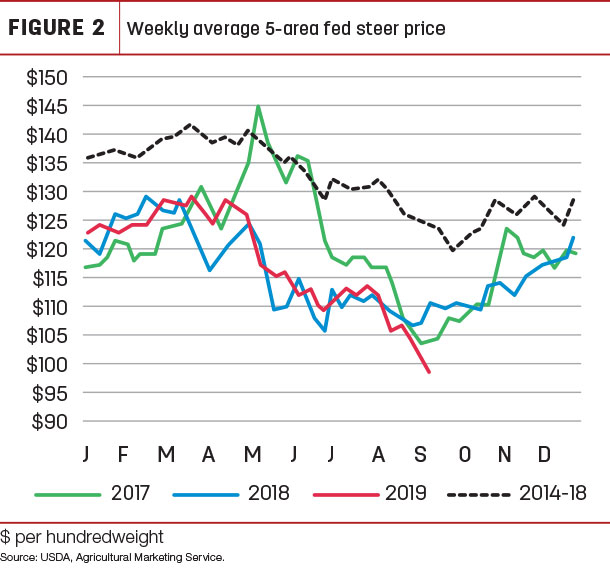 Reflecting concerns over the ability of the industry to maintain pre-fire levels of fed cattle slaughter, futures prices for live cattle have reacted negatively to the situation. The implications of sharply lower nearby futures contracts relative to cash prices likely motivated feedlot operators to maintain a strong pace of marketings despite lower prices and a Choice-Select beef price spread, which typically would have encouraged feedlots to keep cattle on feed longer. 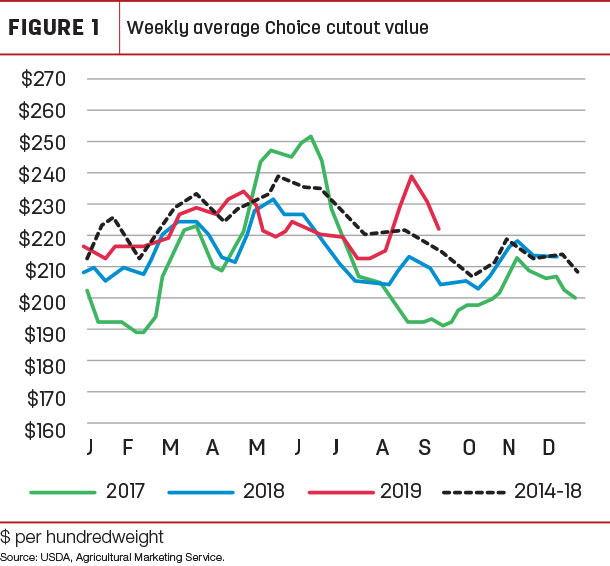 For cattle feeders who were hedged, the sharp decline in the nearby contract implied they could buy back those contracts sold at the time of placement at a lower price than previously expected and likely encouraged them to market cattle at lower cash prices. However, as the cash premiums to the futures contracts diminish, feedlots may be less willing to market cattle at a loss.

Although the industry has thus far maintained slaughter levels at a pace close to that before the fire, the temporary loss of the Holcomb plant may reduce the sector’s ability to maintain fourth-quarter slaughter at previously anticipated levels. As a result, the 2019 beef production forecast was lowered by 90 million pounds from the previous month to 27 billion pounds, based primarily on a slower expected pace of fed cattle slaughter and lighter expected dressed weights in the fourth quarter. The reduction was partially offset by greater anticipated cow slaughter through 2019.

The forecast for 2020 beef production was raised by 105 million pounds from the previous month’s forecast to 27.7 billion pounds. The Holcomb plant’s expected return to operation by 2020 will support greater expected fed cattle slaughter in first-half 2020. Average carcass weights are forecast higher, in part as a result of more fed cattle in the slaughter mix.

Although much of the lost capacity has been mitigated in the weeks following the fire at the Holcomb plant, negotiated cash prices for fed cattle turned substantially lower. In the week before the fire, the weekly average fed steer price in the 5-area marketing region was $113.82 per hundredweight (cwt). Five weeks after the fire, the weekly average price dropped almost 11% to $100.07 per cwt for the week ending Sept. 15. The price forecast for third-quarter 2019 was lowered $3 to $107 per cwt. 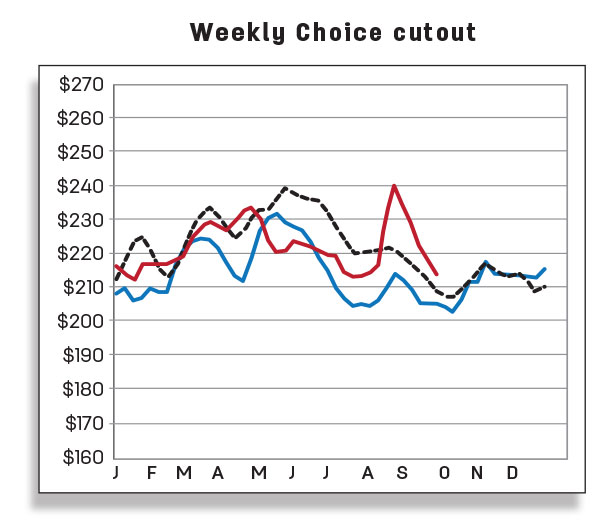 With the expected return of the Holcomb plant in first-quarter 2020, the additional capacity would suggest some price support for fed cattle in early 2020. However, to the extent feedlots may have held cattle over from fourth-quarter 2019 into early 2020, increased availability of cattle may mitigate some of the upward pressure on prices from increased packer demand. Accordingly, the first- and second-quarter price forecasts for 2020 were reduced by $5 to $119 and $117 per cwt, respectively. As a result, the 2020 annual price forecast for fed steers was lower by $4 to $115 per cwt.

Further up the value chain, the shift in demand for fed cattle has put considerable pressure on feeder steer prices. Weakness in fed cattle prices will likely affect feedlots’ pricing of feeder cattle. On Sept. 9 at the Oklahoma City National stockyards, sales of feeder steers weighing 750 to 800 pounds were reported at $134.80 per cwt, down about $6 from the week before the fire. 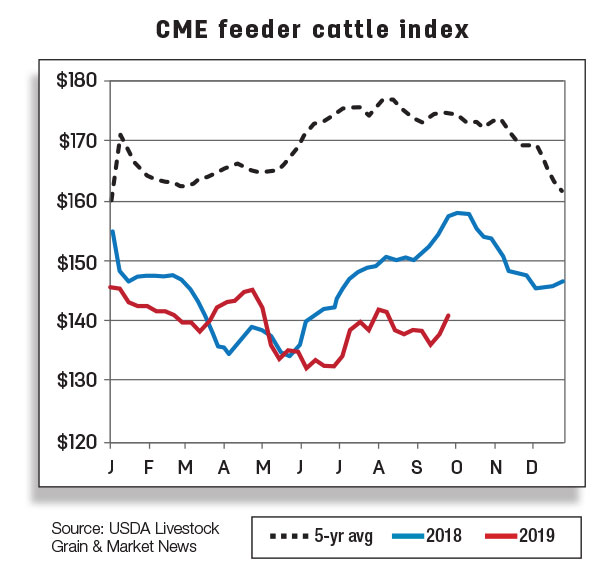 U.S. beef exports in July were 273 million pounds, down 2% from year-earlier levels. The largest year-over-year volume declines were to Japan, Canada and Mexico. Despite tariffs on U.S. beef, however, exports to China nearly doubled year-earlier levels in July. 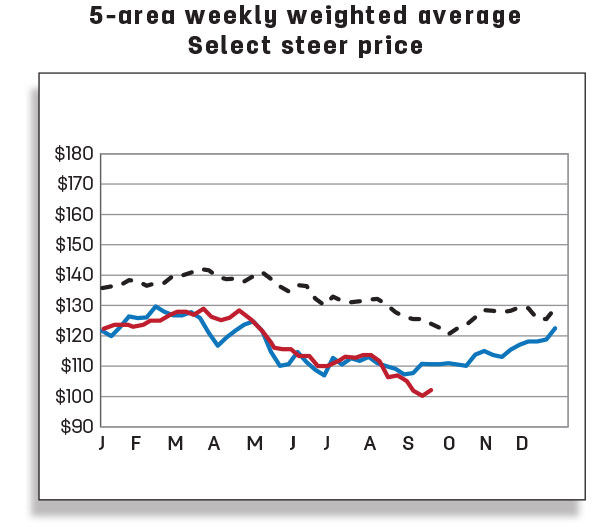 Based on continued price competition with other major beef exporting countries in Japan, lower July exports and August Export Sales Reporting data, the third-quarter 2019 export forecast was revised down by 10 million pounds to 825 million pounds. Total exports in 2019 are expected to be 3.1 billion pounds, almost 1% below a year earlier. The 2020 forecast was left unchanged at 3.2 billion pounds.

Beef imports down on lower shipments from New Zealand

U.S. beef imports in July were down 10% from a year earlier to 267 million pounds. The decline was driven largely by 44% fewer imports from New Zealand. In July, New Zealand reported slightly lower total exports but significantly larger shipments to China. U.S. imports from New Zealand in 2019 are well below five-year average volumes. USDA/AMS weekly reports also suggest lower year-over-year imports in August. Based on lower July imports and weaker weekly estimates for August, the third-quarter 2019 beef import forecast was revised downward by 15 million pounds from year-earlier levels to 780 million pounds. Beef imports for 2019 are expected to total about 3 billion pounds. The 2020 beef import forecast – also about 3 billion pounds – is unchanged from the previous month.