It’s hard to imagine that one of the most influential youth programs of the dairy industry began as a drawing on a cocktail napkin, but perhaps all great ideas start out that way.

In the early 2000s, there became a great need for young industry professionals who knew how to work as a team and understood all of the moving parts on a dairy. Individuals coming out of college knew a lot about their specialized area of education, but companies were spending money and resources training these new professionals to work with other consultants and key players in the field. As this need continued to grow, so did the conversation about it: Enter Dave Thorbahn, president and chief executive officer of Select Sires Inc.

Thorbahn and colleague Linda Hodorff were having a similar conversation during the Western Dairy Management Conference in 2000, when Thorbahn reflected on a competition he participated in during his time completing his MBA at the University of Wisconsin – Madison.

“Four people were assigned a case study on a business,” Thorbahn recalled. “We were supposed to present it to the class, and the nature of the assignment kind of turned it into a competition. I remember telling Linda we needed something like this in dairy science programs, and she looked at me and said, ‘OK, when do we start?’”

After some asking around, Thorbahn discovered that Michigan State University and Cargill had had a similar idea, and the Spartans ended up housing the competition for the first two years of its existence. 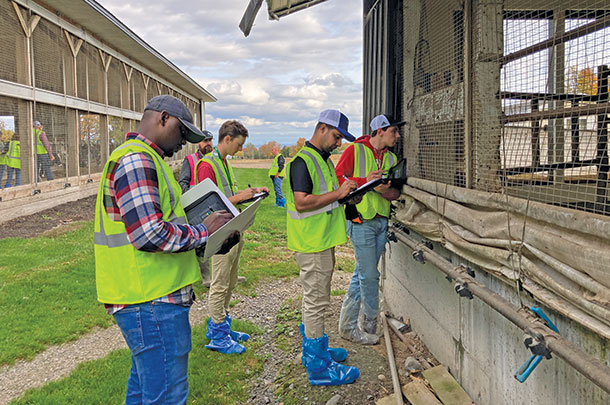 In 2002, 14 teams representing 13 schools traveled to Lansing, Michigan, to participate in the first-ever North American Intercollegiate Dairy Challenge (NAIDC): a competition that requires a team of four students to analyze and tour a functioning dairy, compile a list of recommendations and present their findings to a panel of judges.

“The teaching in dairy science programs back then were centered around the biology of the cow,” said Mike Van Amburgh, professor of animal science at Cornell University, Dairy Challenge coach and longtime supporter of the program. “What we needed to think about was the economics and decision-making that are involved in the operation of a dairy – because that’s what these kids were going to be doing in the workforce.”

Van Amburgh said the activity really brought the industry together.

“It’s motivating to see the next generation enthusiastic and interested, and watch them teach and learn from each other,” Van Amburgh said. “I think there’s a great sense of camaraderie as students get to represent their schools, and the connections made through this program are very beneficial.”

“Being able to take what you learn through Dairy Challenge and use it to identify things a dairy is doing well, along with opportunities for improvement, can give you immediate credibility when speaking with a dairy owner or manager,” Boyd said. “Whenever someone mentions a potential change in a dairy operation, or I’m considering a change in mine, my first thoughts are whether it’ll pay for itself and how realistic the projected gains are. In addition to those skills you use every time you step on a farm, you also meet people through the event – coaches, advisers, judges, volunteers and your fellow participants – who you’ll be seeing again throughout your career. My first post-graduation job was in part the result of meeting someone at Dairy Challenge.”

For different companies in the dairy industry, the Dairy Challenge is a great resource to network with potential employees.

“Companies have told me they’ve stopped going to recruiting fairs,” said Molly Kelley, executive director of NAIDC. “They recruit at Dairy Challenge because this program is producing the kind of people they want to hire.”

Since the first competition in 2002, over 8,000 students have participated in the national, regional, academy or vet challenges. Over 100 schools were represented during the virtual national competition in 2021. Fitting that the theme for this year’s event is “changing lives.”

To celebrate 20 years, NAIDC will be taking a moment to “soak it all in,” eat some birthday cake and reflect on the past 20 years with a memorial video during the awards banquet April 2.