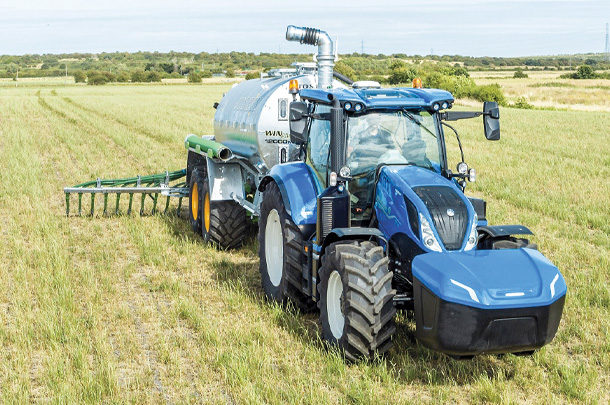 What can energy independence mean for farmers?

Mark Lowery
Imagine a world where you would be able to meet all of your own energy needs, where you didn’t have to worry about fluctuating fuel prices and the negative impact they have on your farm income.
Mark Lowery

It might sound like a dream, but the energy-independent farm can be a reality with the world’s first tractor to run on methane. The first commercial production unit of a methane-powered tractor to operate in the U.S. is now working at Hilmar Jerseys, a large dairy operation in California.

When we talk about the vision for an energy-independent farm, we see the farmer of the future as being not only a producer of food and fiber, but a producer of energy using manure that was once considered a waste byproduct to generate biomethane, a consumable energy product. Fueling a tractor is one way to make use of this resource, but it’s also possible to sell energy back to the grid to create additional income for the farm.

No one has been immune to the pain of the upward march of the price of diesel fuel. Energy independence will allow producers to free themselves from unpredictable fuel costs. That’s the foundational principle of the energy-independent farm. It’s a closed loop between agricultural production using energy/fuel crops and manure to generate energy that can make farming energy independent and CO2-neutral or even carbon negative. Producing 99% less particulate matter, reducing CO2 emissions by 10% and overall emissions by 80%, the methane-powered tractor can achieve near-zero CO2 emissions when using biomethane.

The environmental advantages of a methane-powered tractor and energy-independent farm are significant and often grab the headlines. But I believe equally important to American agriculturists are the self-sufficiency, fuel cost savings and the ability to generate additional revenue through energy production that contributes to a farm’s long-term sustainability. By operating an on-farm biodigester, producers can sell energy to the grid and earn clean fuel credits through the Renewable Fuel Standard (RFS), a federal program designed to reduce greenhouse gas emissions and reliance on imported oil.

Dairy producers are in prime position to cash in on this opportunity. Although energy independence may seem to be a bit visionary at this point, farmers can meet the energy needs of their farm and sell the surplus energy. Hilmar Jerseys is in the process of doing just that. With a focus on sustainability, they have 4 acres of solar panels to generate electricity and are investing in an on-farm anaerobic digestion (AD) plant to collect methane from the manure produced by their dairy herd. They will not only sell the methane gas to the PG&E pipeline but also plan to fuel the chore tractors that run their dairy operation, so their farm will be energy-independent and remain viable for generations to come.

A biodigester is one link in the chain of sustainability that can make a real, purposeful return on investment in how you power your equipment. Even without the benefit of an on-farm biodigester, costs to fuel the methane-powered tractor (which is a hybrid that operates on biomethane or compressed natural gas fuel) are as much as 30% less than diesel. The performance is equivalent to a diesel-powered tractor of the same horsepower; the new methane-powered tractor can do everything from a power and performance perspective that a comparable 120 PTO hp mid-range tractor can do.

Apart from an on-farm biodigester, there are other biomethane access options. Cooperation between farmers and the existing biomethane grid will play an important part in energy independence. These include a virtual pipeline – a truck containing gas-filled pipes delivered to your location. Here you connect the hose, and the pressure difference fills the tractor – and because it’s a wheeled unit, there are no installation issues. There is potential for cooperatives to do this. Opportunities could also be offered for a small group of farms working together to produce gas which is exported to a central injection point, fueling two or three tractors on each farm. This is being successfully done in parts of Europe.

The methane-powered tractor can also run on compressed natural gas (CNG) if biologically produced methane is unavailable, so you could take advantage of CNG fuel from existing individual filling stations. Apart from the beneficial environmental aspects, if you can fuel your tractor 30% cheaper than with diesel fuel, that in itself can be pretty attractive.

The opportunity to build the biomethane structure for independence and sustainability versus fossil fuels is here in the U.S. and is undoubtedly growing. Some things are still being worked out, but within the framework of the energy-independent farm, farmers can look forward to being self-sufficient, profitable and sustain their farming operation in addition to meeting requirements to reduce CO2 emissions and mitigate climate change.

PHOTO: Energy independence is the impetus behind this design of a methane-powered tractor manufactured by New Holland – the first commercial production unit in the U.S. Photo courtesy of New Holland.