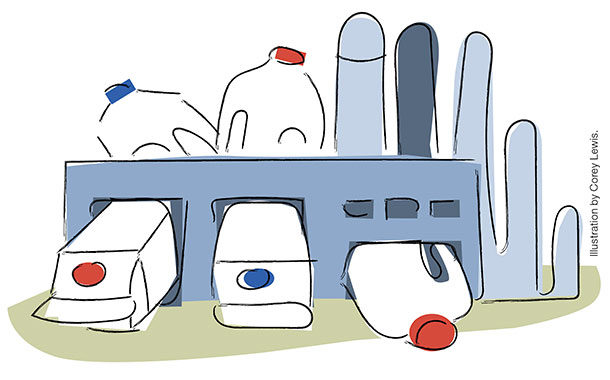 State of the Dairy 2022: Northeast: A brighter price outlook, but uncertainty abounds

Dave Natzke
The 2022 outlook for dairy in the Northeast is for much stronger milk prices but also lots of uncertainty, according to Christopher Wolf, Cornell University dairy economist.
Dave Natzke

“This is the most uncertain year that I can recall,” said Wolf, who was featured in Farm Credit East and Pennsylvania Center for Dairy Excellence webinars in January.

Dairy farmers are faced with escalating costs for many inputs, affecting their ability to produce milk. Costs of typical dairy rations haven’t been this high in eight to 10 years, Wolf said, contributing to stagnant growth in milk output per cow as producers seek to ratchet down ration costs.

“When we look at what’s contributing to year-over-year inflation, the big one is energy,” Wolf said. That impacts everything from the cost of utility and fuel bills to fertilizer to milk hauling to feed delivery transportation costs.

“Even though we’re looking at the highest farm milk price in possibly eight years, that doesn’t necessarily mean that it’s the highest margin,” Wolf said.

Here are some numbers

Geographically, this article in Progressive Dairy’s “State of Dairy” series focuses on states touched by the Northeast Federal Milk Marketing Order (FMMO). That covers New England, New York, Pennsylvania and Mid-Atlantic states reaching south to Maryland and Virginia. Based on the USDA’s semi-annual Cattle report, dairy cow numbers in those states start 2022 at about 1.394 million, down about 20,000 from a year ago. Biggest year-over-year declines are in New York and Pennsylvania, each down about 5,000 head.

Like elsewhere, 2021 was a story of two halves: a buildup of cow numbers and milk production, followed by a downturn in the second half of the year. Based on preliminary USDA estimates, every state in the region except New York posted small year-over-year declines in milk production. Even with slight growth in New York, it slipped below Texas as the fourth-largest milk producing state in the U.S.

The Northeast did not see the same moisture shortages as producers in the West; in some cases, the opposite was true. Although overall hay and forage production was up, quality was variable, affecting prices for premium alfalfa hay. Over the past two years, weighted average prices for dairy-quality alfalfa hay in New York and Pennsylvania have been higher than any other of the seven largest milk-producing states.

Government payments are going to be much less significant in 2022 than they were in 2021 and especially in 2020, Laughton said.

“Base-excess programs are a significant factor for many producers, not just those who might want to do major expansions, but those who want to make incremental increases in output as well,” Laughton said.

A ‘watchful’ attitude in Pennsylvania

For Jayne Sebright, executive director of Pennsylvania’s Center for Dairy Excellence (CDE), dairy producers in the Keystone State are “watchful.”

“With milk markets showing optimism in January and with feed prices softening a little bit, there is cautious optimism that it could be a positive year for dairy farmers,” she said. “However, the limited access to non-fluid milk markets continues to be a challenge, with cooperatives’ base-excess programs in place and independent dairies struggling to stay afloat. The farms that want to grow or expand their dairies cannot do so because they can’t find a market for their milk.”

Among other concerns is the ongoing struggle to find good-quality labor, as the Latino workforce continues to be stretched, and there’s a shortage of qualified candidates for mid-manager roles. There’s also concern for the next generation.

“We have a lot of smaller, multigenerational farms here in the Commonwealth, and these farm families continue to need guidance and assistance in walking through that transition and succession plan,” Sebright said.

Maryland and Virginia positioned for growth

Lindsay Reames, executive vice president of sustainability and external relations with the Maryland & Virginia Milk Producers Cooperative, said the co-op just wrapped up a “landmark year” of growth in 2021. “We see our dairy farmers riding this wave of growth and having a hopeful outlook for their dairy businesses in 2022,” she said.

“COVID-19 continues to present opportunities, and create disruptions, for our cooperative,” Reames said. “Labor is short and transportation is tight. Our farmers are seeing increased costs and diminishing availability of the inputs needed to keep their farms working.”

Having earned more than $11 million in grants to invest in on-farm sustainability projects and programs in 2021, Reames said the co-op is in a unique position to tell the story of U.S. dairy. “The story of small, family-owned operations with an eye for animal care and sustainability resonates with our customers and the end-consumer,” she said.

Positioned as a buffer between excess milk production in the Northeast and milk production deficits in the Southeast, MDVA’s diverse portfolio of five processing plants is filling growing demand for dairy products. As such, Reames said MDVA’s seasonal base program doesn’t limit herd or production expansion.

Farther north, that’s not the case. Wolf notes that production over processing capacity has resulted in a larger percentage of milk dumping in the Northeast FMMO, especially during the spring flush. Many of the same factors affecting producers are impacting processors as they struggle to match milk supplies with processing and marketing capacity and seek to control balancing costs. Labor shortages prevent milk processing plants from adding shifts, creating backlogs and limiting availability of milk haulers. When combined with the potential for higher interest rates, inflation’s impact can extend to the cost of working capital to deal with supply chain issues.

“If you’re a firm that needs more cold storage capacity to manage the fluctuations in demand, increases in interest rate make it more difficult to address that issue,” Wolf said.

“Processors are clearly struggling to keep up,” said Laughton. “The bottleneck seems to be capacity rather than demand. Many plants have not been able to operate at full capacity due to staffing issues, and trucking and logistics are another challenge.”

“I’m suggesting that you approach this from purely a risk management point of view and not a profit-maximizing point of view,” Wolf said.

With government COVID-related assistance payments much less significant in 2022 than in 2020-21, insurance programs like Dairy Margin Coverage (DMC), Dairy Revenue Protection (Dairy-RP) and Livestock Gross Margin for Dairy (LGM-Dairy) may be more important than ever to consider as part of a farm’s risk management strategy, Laughton said.

Producer financial health in Pennsylvania entering 2022 is heavily dependent on use of risk management tools and leveraging government assistance during the pandemic, according to Zach Myers, risk education manager with Pennsylvania’s CDE. Those who embraced risk management programs were able to invest in their dairies and pay down debt, resulting in stronger balance sheets. Others more resistant to using risk management are struggling.

Thus far, enrollment in DMC has been lower than in the past, and the USDA has extended the sign-up period until March 25. Maryland and Virginia producer participation in the program is supported by state programs that help fund premium costs.

“There is an increasing drumbeat in the region for FMMO reform,” Laughton said. “The agreement breaks down, however, when the discussion shifts to what that change should look like. There’s a general dissatisfaction with the status quo, but it’s hard for policy-makers to get behind reforming the FMMOs when there are a lot of different opinions about what should be done.”

According to Myers, the region is unique in that it has the most balanced milk class utilization than any other region in the country. At the same time, significant amounts of Class I utilization in both Northeast and Mideast FMMOs left producers susceptible to the change in the “Class I mover” formula. He shared estimates that the change cost Pennsylvania producers about $1 per hundredweight from May 2019 – December 2020.

“Producers in this region want any potential modification to the Class I price calculation, or any modification to other class prices, to be fully vetted prior to passing any legislative or USDA hearing process to ensure that the possibility of negative unintended consequences is minimized,” Myers said.