Nutritionists aim to put together a diet that has a balanced amount of these protein pools while keeping the cost of the diet “in check.” On-farm forages (i.e., alfalfa silage, grass hay, alfalfa hay) are economical feed sources. There are lower transportation costs associated with these feeds. Alfalfa and grass sources are typically high in rumen-degradable protein (as shown in Figure 1). 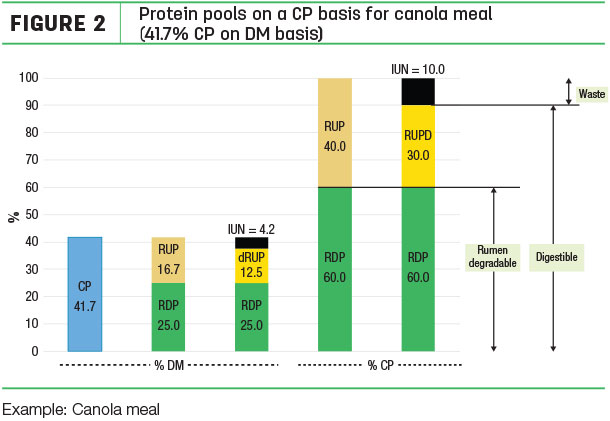 Thus, less protein is degradable in the rumen, and the bypass protein is quite digestible. The challenge for nutritionists is to find a supplemental protein source that has a high level of RUP available for absorption (i.e., a high level of dRUP), as such sources complement readily available alfalfa and grass sources, but the nutritionists can’t break the bank doing it.

The remainder of this article will explain a method for evaluating the value of protein in a feed source. In other words, determining cost per unit of protein that can be used by the cow for productive functions (i.e., milk production).

A calculator or a spreadsheet would also be helpful. I’ll forewarn you that the measure of dRUP might be tough to get from some sources, as this is a newer metric.

Table 1 shows an evaluation of three protein sources and provides the math needed to arrive at the calculated values.

These figures illustrate how the different protein systems relate to one another. Pools are shown both on a dry matter and CP basis (i.e., CP = 100 percent).

Rumen degradability of protein is described with the following terms:

The digestibility of protein is described with the following terms:

However, there are many dietary factors that influence MP, like rumen fermentation (type and amount of protein and carbohydrate available) and dry matter intake. These other factors make MP difficult to assess without the use of ration formulation software.

As previously mentioned, dRUP is a primary component of MP that can be assessed without much variation. This reinforces the rationale for evaluating the value of protein sources on a cost per unit of dRUP ($ per pound dRUP, as shown in Table 1).