Technology that informs a self-driving car what a pedestrian looks like or that alerts you which of your friends are in a photo you posted on Facebook is coming to dairy farms. The technology could soon help dairy farmers detect estrus, monitor feed intake and predict when a cow is not feeling well.

Cainthus, a global computer vision technology company, recently installed its technology on a California dairy for a commercial test run. The system installed in December in a pen of 400 Holstein cows on Maddox Dairy in Riverdale, California, will monitor cows’ feed and water intake. During the trial, the company will be sifting through common cattle gestures to create alerts that may be useful to dairy producers.

“Our family is very accepting of new things,” says Stephen Maddox Jr. when asked about why the dairy agreed to the trial. “This technology is a little out there, which is kind of exciting.”

Maddox Dairy has tested other types of cow monitors and wearables, including rumen temperature monitoring boluses and activity eartags. They found those technologies either unreliable or too expensive to justify their use. However, after just a couple of months of use, the dairy confirms the computer vision technology is accurate and “potentially revolutionary.”

More than 40 cameras were installed in the test barn to track mature cows, or about one camera for every 16 cows. The cameras look like common dome-shaped security cameras. Maddox says they are “barely noticeable.” Each camera captures 30 images of the pen per second. They are hardwired to a server installed on the dairy that collects and analyzes the images for individual cows’ activity. 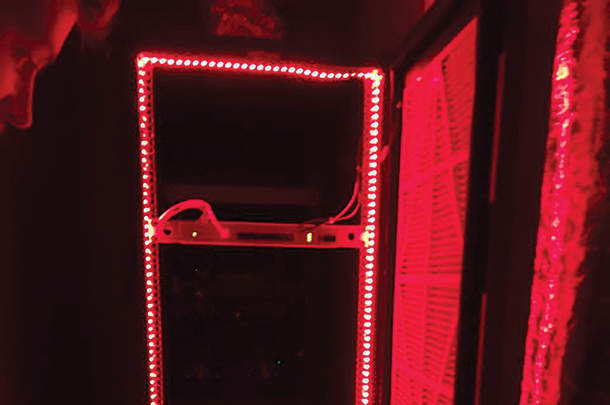 “Each time a video gets submitted with cows in it, the software identifies which cows they are based on their pelt pattern and how they move,” says the company’s co-founder David Hunt. “We then have another algorithm that interprets what those movements of the individual cows mean. Any gesture or indicator that is identifiable by a human we will be able to identify with our software.”

One of the purposes of the trial is to begin to create specific issue alerts based on activity deviations. The system already does off-feed alerts. The company announced in January its first issue alert – one for lame cows. Future developments could include alerts for estrus, aggression or health-related issues. No additional hardware is required to add more alerts, just a software update.

One of the aspects of the technology that is most interesting to Maddox Dairy is the potential for the system to track which cows are most efficient at converting feed into milk.

“We always evaluate cows on their milk production, but we never really know how efficient a cow is to feed,” Maddox says. “This system can equate how long and how much she eats; we can then compare it to milk production. That would change how we look at and evaluate cows.”

Hunt says the system can be integrated with robotic milking to calculate feed efficiency in real time.

“You could know daily which animals in your herd eat the least and produce the most milk,” he says of the potential if an identification camera were to be installed inside a milking robot. “Obviously, those are the animals that you want to be prioritizing.”

In addition to futuristic thinking, Maddox says the dairy has already found some practical management applications for the system. For example, before the system was installed, the employee who cleans out feedbunks had the day off on Sunday and clean-out did not occur on those days. However, the system showed there was a 10-minute dip in average feeding time for cows on Sunday compared with other days. The dairy has since assigned another employee to the clean-out task on Sundays to avoid the deviation. 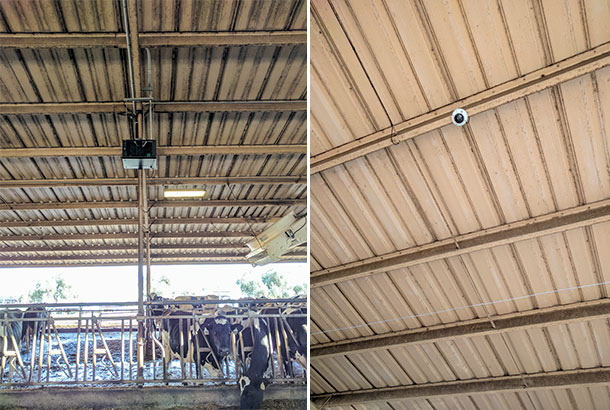 “Feedbunk clean-out is not a revolutionary idea, but when you see how it affects the cows, it’s really interesting,” Maddox says.

The dairy also observed from the data that cows tended to eat at the beginning or the end of the feedbunk. Again, Maddox says, this finding is not surprising and should be predictable. However, his feeders noticed that when orange byproducts were included in the ration, the cows tended to eat more evenly across the bunk. The dairy now tries to stretch its supply of orange byproducts over several days to help with competition at the bunk.

“It shows a lot of interesting stuff,” Maddox says. “In terms of quantifiable value though, we’re not yet sure how to measure it.”

Hunt believes this technology could eventually replace other forms of identification, as pelt pattern is unique to each animal. The camera-based technology also doesn’t require an animal to come within a certain proximity of a reader nor does it require anything be attached to the cow. Hunt says cameras and computer vision technology will likely become the universal sensor because they are cheaper and more reliable than other methods.

“If a human can see it, you can teach a computer to see it earlier and more consistently,” Hunt says.

PHOTO 1: A live video image capable of tracking how long each cow was eating caught the attention of Maddox Dairy last year. The dairy has since installed the first commercial test of computer vision technology on a livestock farm. Illustration by Kristen Phillips.

PHOTO 2: Video data captured at Maddox Dairy is relayed back to an on-site server for visual analytic processing. Photo courtesy of Cainthus.

PHOTO 3: Required equipment in the barn is minimalistic. Security-like cameras and this data processing unit are the most obvious evidence of the system’s installation. Photo courtesy of Cainthus.