The link between oil and milk prices

U.S. dairy product prices have moved in harmony with oil prices for more than a decade. Since 2005, price gains in nonfat dry milk have always coincided with price gains in oil; collapses in milk powder markets have occurred while crude oil prices declined.

Traders were the first to take notice and talk about the price relationship between dairy and oil. But it is no longer just them. In fact, recently, several dairy farmers and ingredient buyers have asked me about oil markets.

And with crude oil prices now turning around, dairy producers want to know: Are milk prices bottoming, too?

The price relationship between oil and dairy is strong. But to relate oil and dairy prices requires a discussion of the shared supply-and-demand dynamics.

Realize that there are significant structural similarities between the oil and dairy industries. In the dairy industry, cows are milked every day. This means milk is shipped and manufactured day in and day out. In the oil industry, wells are active every day, which means oil is constantly flowing; manufacturing sites are always operating.

The cost structure looks similar in both industries too: Significant up-front and fixed-cost investment, with low variable costs in comparison. The result: supply, whether it is milk or oil, is not very sensitive to market prices.

This is why, in hard times like these, the farmer keeps milking and the oil company keeps pumping until the bank says, “No.” Slowing down production just isn’t an economically viable option.

On the demand side of the equation, customers of both commodities will tend to buy regardless of the price. An economist would call this “price inelasticity.” For example, McDonald’s will not start selling hamburgers instead of cheeseburgers because cheese prices doubled.

A commuter will continue to drive to work, despite gasoline rising from $2 to $3 per gallon. On the flip side, if prices fall, McDonald’s will not instantly increase the amount of cheese on its burgers, nor will the commuter immediately go out and buy a gas-guzzler.

As a result, the dairy and oil industries are subject to extreme over- and undersupply. And all it takes is a few percentage point changes in production or demand. You will notice: Milk and oil prices have similar levels of volatility.

What is unusual is: This price volatility has been in sync over the last decade. In fact, whole milk powder price movements look almost identical to oil price changes (Figure 1). That is, with one exception of 2012 when another drought hit New Zealand. 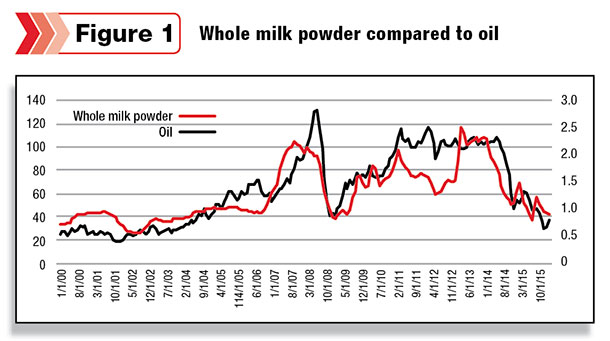 What has happened is: Over the last 10 years or so, oil and dairy markets have experienced supply shocks at similar times and demand shocks from the same sources.

What are the similar supply shocks? The oil price rally in 2007 was caused by OPEC’s decision to slow production growth. Meanwhile, drought hit New Zealand beginning in the summer of 2007 and continued through the early part of 2008.

Most recently, the oversupply in oil, which was caused by structural change in the oil industry due to new drilling technology, occurred at the same time as the European Union (EU) lifted milk supply controls and ended the quota system. This allowed EU producers to enter the global market, which is a structural change in the global dairy industry.

What are the similar demand shocks? Growth in oil and milk demand from China led to the price recoveries post-2009. China stepping back from the market contributed to both the oil and milk price declines in 2015 and thereafter.

Notice that these supply and demand shocks have international origins. Just as an oil producer in Russia should fear technology improvement in the U.S., an American dairy farmer should care about weather developments in the South Pacific.

That being said, not all of the products used in the U.S. milk pricing formulas are internationally traded, which means milk prices are not single-handedly driven by international supply and demand factors.

This is why nonfat dry milk and whey markets (Figure 2) experience the same international demand shocks as oil and have the strongest price relationships. Cheese markets, on the other hand, have a weaker price relationship. Butter markets do not have any at all. 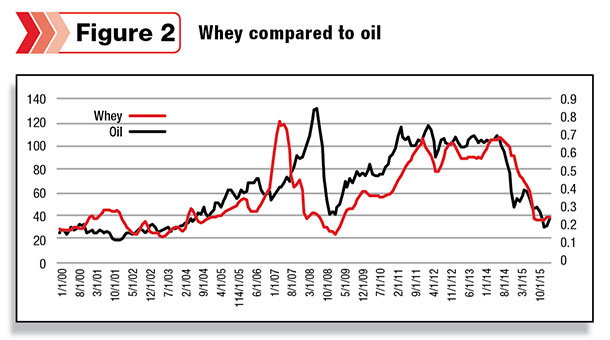 So then, to get back to the title of this article: What has been the common link between oil and milk prices? On some level – luck. Supply shocks in dairy, caused by policy changes in Europe and drought in New Zealand, happened to coincide with OPEC policy decisions and structural changes in the oil industry.

However, on the demand side of the equation, it was more than luck. The common link between oil and milk prices was the shared engine for growth: the rising numbers of global middle-class citizens. And the Chinese middle class was the most important example over the last decade.

Two more questions: Will dairy product prices and oil continue to trend together? Most likely, yes. The rising middle class around the world remains the shared engine of growth for both of our industries.

Last, does a rising oil market indicate milk prices are recovering? In the case of whey and nonfat dry milk prices, components of Class III and Class IV milk prices, respectively, the answer is, yes.

Historically, oil prices have served as an indicator of global demand for these products. As stated earlier, the relationship is significantly weaker for cheese and nonexistent for butter.

The bottom line: The link between dairy and oil markets is not magical at all. Instead, it’s just shared economics.  PD