Euthanasia methods and risks: What every producer needs to know

Timely euthanasia is perhaps one of the biggest challenges for farmers and veterinarians. Many times, there isn’t a definite answer. Euthanizing the animal too early could mean a missed opportunity, but doing it too late means unnecessary animal suffering.

There are currently three accepted methods for euthanizing beef and dairy cattle. They are barbiturates and barbituric acid derivatives, gunshot and penetrating captive bolt with adjunctive methods.

“I wish there were some other ways because these aren’t always the most desirable,” Shearer said. “Despite being humane, some are violent and therefore difficult to apply, but the reality is this is what we have. These are the ones that we know scientifically at least will cause death without pain or distress to the animal. These are the ones that we need to be applying.”

Each method carries with it varying levels of risk and cost. It is important for farmers to work closely with their veterinarian in these situations to determine first if euthanasia is necessary and second which method is most appropriate for their situation and that it is executed properly.

These are the most expensive methods for euthanizing cattle, typically costing $60 and $70 per animal. Classified as non-inhalant agents, these methods generally result in a smooth transition from consciousness to unconsciousness and death.

“For many people, they assume when they watch this, this is the way it should be done, this is the most humane. That’s not necessarily so,” Shearer said.

The reason being this method requires the animal to be restrained while the needle is inserted into the jugular vein. Shearer said that close contact works well for pets and other animals used to being handled by people, but this usually isn’t the case with cattle.

Another downside to this method is that due to the nature of the drugs used, it can only be administered by a veterinarian, and carcass disposal becomes much more complicated. If it isn’t disposed of properly, it can pose risks for wildlife.

This, Shearer said, is the most common method currently being used for on-farm euthanasia in cattle. It is classified as a physical method, and its effectiveness depends upon the selection of the appropriate firearm, bullet type and anatomical site.

The American Veterinary Medical Association’s (AVMA) 2013 euthanasia guidelines do not recommend using a .22 LR for euthanasia of adult cattle because muzzle velocity is insufficient for consistent results. Instead, Shearer suggests these options:

While hollow-point bullets might sound like an effective method, Shearer said that isn’t the case. Since these bullets fragment on impact, they are often unable to penetrate the skull, limiting the destruction of brain tissue. Use of a solid-point bullet is preferred since it is more likely to penetrate through the skull and into the brain, where it causes immediate unconsciousness and massive destruction of brain tissue.

Shotguns loaded with shotshells are an excellent choice for euthanasia. When fired from a distance of 3 to 4 feet, the BBs will strike their intended target as a compact mass, effectively penetrating the skull and causing extensive brain damage. Firearms are best when used for euthanasia in outdoor conditions. Indoors, there is risk of the bullet exiting the animal where it could ricochet and be of danger to the operator and bystanders. The noise from the gun can also be disturbing to surrounding animals.

Never place the firearm’s muzzle flush with the skull since this could cause the barrel to explode due to pressure generated within it upon firing. In general, Shearer recommended standing so that the muzzle is a minimum of 1.5 feet from the animal’s head to ensure the bullet or shot gets where it needs to go and there is no risk of the barrel exploding.

Click on the image below to see a larger version. 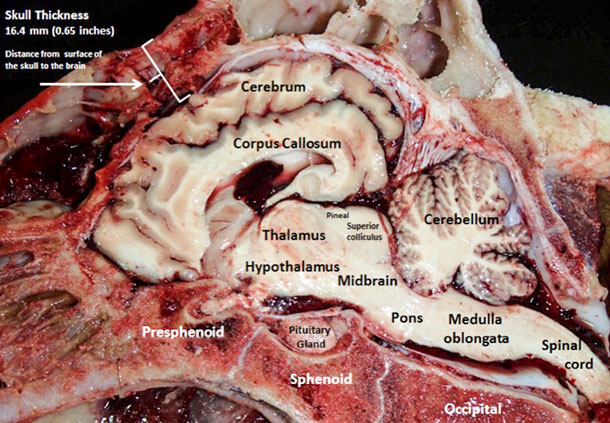 This method is similar to a firearm but, instead of a bullet, a penetrating captive bolt discharges a bolt into the brain. Unlike a firearm, euthanasia by captive bolt also requires close contact with the animal since it is necessary to place the captive bolt’s muzzle flush with the intended site on the skull.

“A captive bolt’s whole purpose is to induce an immediate loss of consciousness,” Shearer said. “But death is not assured by captive bolt alone. Although research suggests that 90 percent or more of animals rendered unconscious with penetrating captive bolt will proceed to death, a small percentage of animals may return to consciousness. It is for this reason that a secondary step to assure death is highly recommended.”

The methods recommended in the 2013 euthanasia guidelines are exsanguination (bleeding the animal out), pithing and the intravenous administration of a saturated solution of potassium chloride (340 g potassium chloride (KCl) in 1 L water). Animals must be in an unconscious state before using any of these secondary methods. If a person does not have the necessary materials to use one of these techniques, then a second shot is advised.

Shearer said for biosecurity and esthetic reasons, he personally prefers to use the rapid intravenous administration of a saturated solution of potassium chloride once he has determined the animal is unconscious. This method causes cardiac arrest in the unconscious animal, ensuring its death. Pithing or the practice of using a thin rod or cane and running it through the hole in the animal’s head to further damage the brain and brain stem is preferred by some vets, he noted. This method typically induces a little more involuntary movement that for safety reasons should be considered when conducting this procedure.

Non-penetrating captive bolt guns should only be used on calves. These captive bolt guns cause unconsciousness by concussion of the skull. Instead of a bolt, the gun uses a blunter mushroom-type head to impact the skull. A secondary step is also highly recommended when using this device.

A captive bolt can fail due to things like damp cartridges, but Shearer said poor maintenance is the main cause for failure. Therefore, regular cleaning and care is essential to keeping these in working order.

With either the captive bolt or firearm, the animal should immediately drop.

Indicators of unconsciousness and death

Knowing the indicators of death is also essential. They include cardiac arrest, no respiratory activity, no corneal reflexes and rigor mortis. Remember that the secondary actions of pithing, exsanguination, a second shot or a saturated solution of potassium chloride should only be used on unconscious animals.

Bear in mind that the heart will continue to beat for seven to 10 minutes even when the bullet or bolt has caused massive brain damage. This is because the heartbeat is not controlled by the brain; rather, by a specialized tissue in the wall of the right atrium of the heart that generates the electrical impulse for the heart to beat.

Click on the image below to see a larger version. 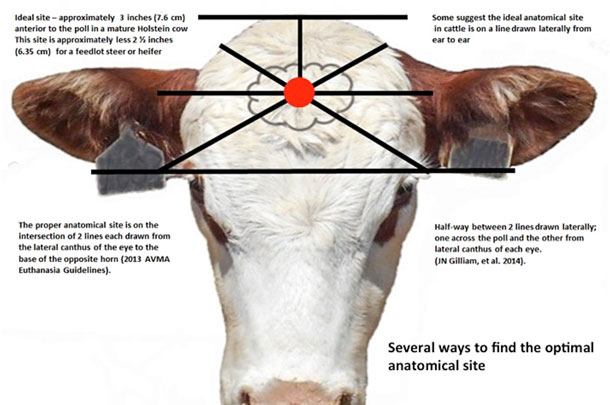 With a firearm or captive bolt, proper shot placement is absolutely necessary to achieve death or unconsciousness. This is especially true with captive bolt since it causes less damage than firearms.

The optimum position for cattle is on the intersection of two imaginary lines each drawn from the rear corner of the eyes to the base of the opposite horn. If done properly, the bolt or bullet will damage the brain stem, which not only ensures immediate unconsciousness, but also reduces any likelihood of a return to consciousness.

No matter which method is used, euthanizing an animal is never an easy decision, Shearer said. However, making timely decisions that are in the animal’s best interest is essential to minimizing animal suffering.